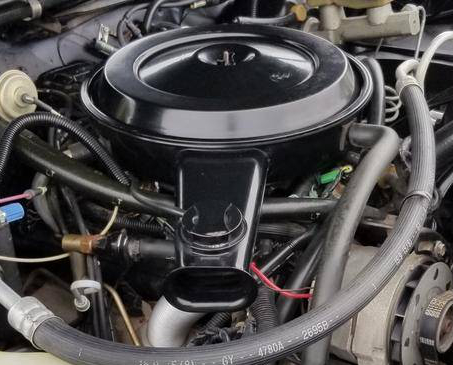 However the most surprising aspect of 1980 was how quickly V8 engines were disappearing. 10 years beforehand in 1970 most American made passenger cars had V8 engines. By 1980 that was no longer the case since new American made cars with 4-
cylinder and 6-cylinder engines were now more commonplace. Even some American full-size and many mid-size rear wheel drive American cars where equipped with larger displacement V6 engines. For instance Buick’s 3.8 liter and 4.1 liter V6 engines were 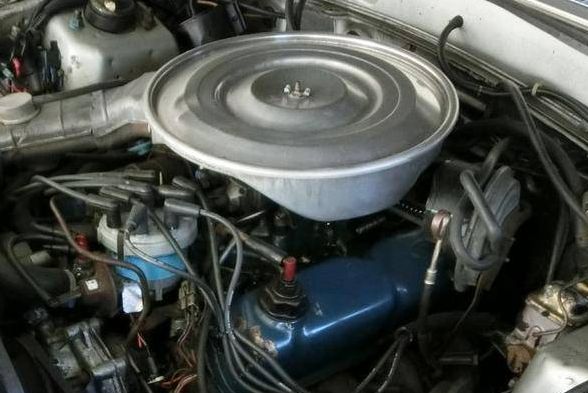 available in many of GM’s 1980 model years cars including full-size cars from all of its U.S. car divisions: Buick, Chevrolet, Oldsmobile, Pontiac, and even Cadillac. Indeed 1980 was a year of big changes with a new low of V8 displacement being 4.2 to 4.4 liters. For 1980 Chevrolet, Ford, Oldsmobile, and Pontiac all produced V8s with 4.3 liters of displacement for the low end of the V8 market. Ford starting in 1980 offered the smallest displacement of the bunch with its 4.2 liter V8 which was only 255 cubic inches. American automakers knew American car buyers still wanted smooth torquey V8s under the hood but the only way these automakers could meet CAFE’s ever increasing average fuel economy standards was by decreasing engine displacement. This plan did work and it seemed to keep customers happy however it came at a cost. For the 1980 model year the 4.2 to 4.4 liter V8s may have been smooth and reliable but their engine output was generally no more than 120 horsepower.

Fortunately these very low displacement V8 engines would not become the new norm for the 1980s decade, they would disappear by the 1983 model year. V8 powered rear-wheel drive American passenger cars would settle on a new lower displacement standard of around 5.0 liters in 1983. And for most of these American passenger cars 5.0 liters from 1983 until the end of the 1980s decade would also be the largest displacement V8s they would have. Most of the 5.0 liter V8s offered at the time were not new offerings, Ford’s 5.0 liter (302 cubic inch) V8 had been around since 1968. Chevrolet’s 5.0 liter (305 cubic inch) V8 dated back to its 1976 model year introduction. For the 1983 model year the horsepower range of the different 5.0 liter V8s varied greatly. The low end of the horsepower scale was Ford’s throttle body fuel injected 5.0 liter V8 which made only 130 horsepower in a some of its Ford, Lincoln, and Mercury cars, one such car was the 1983 Ford LTD Crown Victoria. While the top-end of the scale for 1983 was Chevrolet’s 5.0 liter H.O. V8 which was an engine option in the 1983 Chevrolet Camaro Z28 and Pontiac Trans Am, this engine was rated at 190 horsepower.

Exceptions to the 5.0 liter norm were Cadillac, the Chrysler Corporation, and Pontiac. Cadillac introduced for the 1982 model year it’s small aluminum pushrod V8, the 4.1 liter V8. It was used in Cadillac’s rear-wheel drive cars from the 1982 through 1985 models years and in many of Cadillac’s front-wheel drive cars from the 1985 through 1988 model years. The Chrysler Corporation starting in 1981 and for the rest of the 1980s decade only used a 5.2 liter V8 in its remaining Chrysler, Dodge, and Plymouth rear-wheel drive cars. Pontiac for the 1980s decade did offer its 4.9 liter (301 cubic inch) V8 for the 1980 and 1981 model years which was used in different rear-wheel drive Buick, Chevrolet, Oldsmobile and Pontiac cars. Additionally Pontiac offered in its Trans Am and Firebird Formula a turbo version of the 4.9 liter V8 for 1980 and 1981 which generated 210 horsepower for 1980 and 200 horsepower for 1981.

Another 1980s decade exception of the 5.0 liter V8 norm was the Chevrolet Corvette which had a standard 5.7 liter V8 during the entire 1980s decade. The only exception was the California market 1980 Corvette which had a mandatory 5.0 liter V8 in order to meet the California Air Resource Board emissions standards for that year. Also starting with the 1987 model year the high performance versions of the Chevrolet Camaro and Pontiac Firebird and Trans Am were available with an optional 5.7 liter V8. There was also another V8 that had more than 5.0 liters, it was Oldsmobile’s 5.7 liter diesel V8 engine which during the 1980s decade from the 1980 model year through the 1985 model year could be found in GM’s different divisions’ rear-wheel drive and front-wheel drive cars. Another exception was Chevrolet and Ford’s full-size Police car offerings which were available with V8’s larger than 5.0 liters. For Chevrolet it was a 5.7 liter V8 for Ford it was a 5.8 liter V8. For 1980 and 1981 there were a few other exceptions of U.S. cars having V8 engines larger than 5.0 liters. 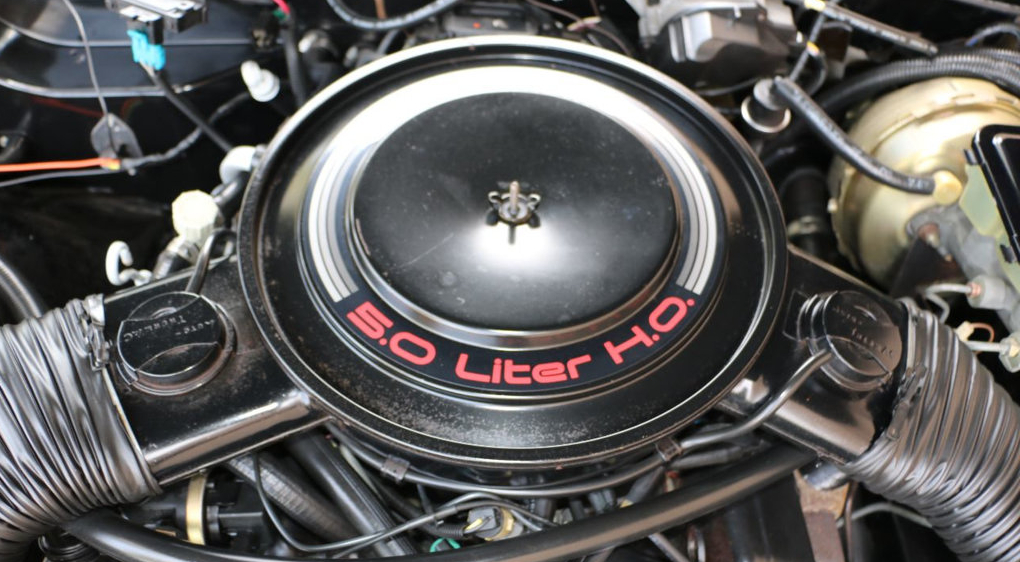 As the 1980s decade progressed U.S. automakers were able to standardize for most rear-wheel drive V8 equipped cars a baseline displacement of 5.0 liters because the CAFE standards peaked for the 1985 model year at 27.5 miles per gallon (or mpg for short) for each automaker’s fleet of cars. For 1986 it dropped back down to 26 mpg which was same standard figure used in 1983. It stayed at 26 mpg until 1989 when it went up slightly to 26.5 mpg. Due to the plateauing of CAFE standards during the mid-1980s U.S. automakers still could meet these standards with 5.0 liter V8s due to the use of fuel efficient computer controlled carburetors and sophisticated fuel injection systems. Not to mention these American automakers selling a lot of 4-cylinder and 6 cylinder powered fuel efficient cars to offset the lower fuel economy ratings of the 5.0 liter V8 powered cars also helped. Not to mention by the mid-1980s most V8 powered cars had new 4-speed automatic transmissions and modern manual transmissions both of which had overdrive gears for better fuel economy. Additionally the average V8 powered car in the 1980s was considerably smaller, lighter, and more aerodynamic than the average V8 powered car in the 1970s which helped to improve fuel economy.

As an example of the progress, Hot Rod Magazine (April 1984 issue) test drove a 1984 Hurst/Olds equipped with a 4-speed automatic transmission and Oldsmobile’s 5.0 liter H.O. V8 rated at 180 horsepower. It did the quarter-mile in 15.84 seconds which was considered very fast by 1984 new car standards and it had an EPA highway mileage rating of 24 mpg. As a comparison a 200 horsepower 7.5 liter (455 cubic-inch) V8 and 4-speed manual equipped 1976 Trans Am was good for 15.6 seconds in the quarter-mile and on a good day it was lucky to get 15 mpg on the highway. 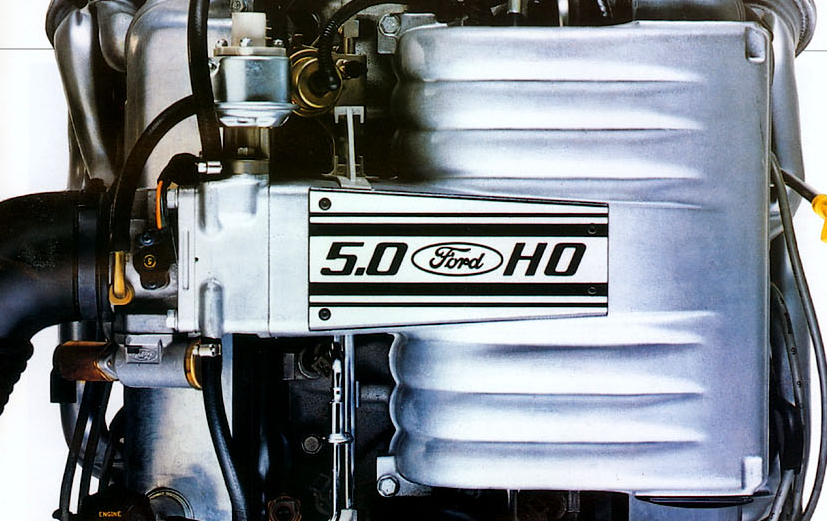 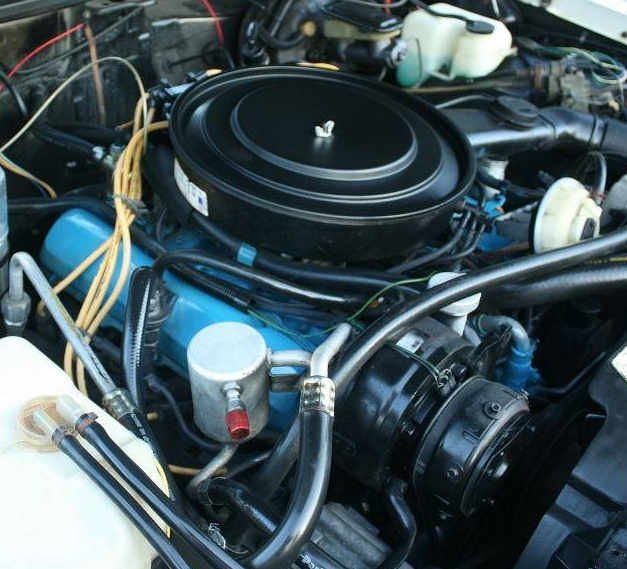 older Oldsmobile small-block V8 parts and current aftermarket performance parts allowing big horsepower gains where even a little above 300 horsepower is possible without a turbo or supercharger.

All the V8s found in mass produced U.S. cars during the 1980s were pushrod V8s with 2 valves per cylinder. By-enlarge most of these V8s were very reliable. Today where cars produce much higher horsepower numbers, it’s hard to understand the historical significance of the 1980s 5.0 liter V8s. After-all even the average turbo 2.0 liter 4-cylinder engines of today can easily outperform the best 5.0 liter V8s of the 1980s. However the 1980s was a time when many cars had extremely slow 4-cylinder and 6-cylinder engines, in comparison a car with a 5.0 liter V8 was a powerful car. Back in the 1980s even if a 5.0 liter V8 was under the hood of a plain low option 4-door sedan or a family station wagon, it didn’t really matter since if had a 5.0 liter V8 the person driving it, was somebody special.