Why the Michelin TRX Tire Technology was Ahead of its Time

By the late-1970s, U.S. automakers began to seriously focus on improving handling on the few remaining performance cars still around at that time. As an example, at this time Ford’s focus was on the Mustang. The 1974-1978 Mustang II had put a lot of money in Ford’s piggy bank due to its very strong sales, but with its mandatory 13-inch wheels and thin tires it could never even come close to having true sports car handling. When Ford was planning the debut of the all-new more European in nature Fox-platform Mustang for the 1979 model year, good handling manners were to be a very important aspect of this new Mustang.

Unlike Pontiac or Chevrolet at the time who both were relying on wider 15-inch conventional radial tires mounted to wide 15-inch rims to provide the extra traction needed to improve handling, Ford instead decided to take a cue from Europe where a new wheel and tire technology was being used by Ferrari, BMW, Alfa Romeo, and many other European automakers. This new technology was developed by Michelin, a French tire company. It was called TRX, Michelin referred to it as a “roadwheel” system where the tire and the wheel were both designed together to provide a comfortable ride and great handling. This was accomplished by far superior wheel

and tire bead fitment than what was available with a conventional tire and wheel setup. The tire bead is the edge of the tire that presses against the wheel rim. TRX provided great ride comfort even with a lower tire sidewall height, compared to regular performance tires at the time which had a much harsher ride quality with the same lower sidewall height. This was vital since by the late-1970s most American performance car tires had a sidewall size of 70 (the sidewall size height is also referred to as the tire’s aspect ratio) whereas Michelin offered with its TRX tires lower sidewalls as high as 65 and as low as 45. The lower the sidewall height the better the handling of the tire is. For instance a 1981 Saab 900 Turbo which was equipped with TRX tires with a 65 sidewall, was a good handling car but was easily out-handled by the 1984 Ferrari 512i BB which had TRX tires with a 45 sidewall. Of course the suspension and other factors come into play to make a car a great handling car, but tires with lower sidewalls are imperative to get the best results out of good handling suspension. A sidewall or aspect ratio number such as 45 means that the height of the side of the tire is 45% of the size of the tire’s width. TRX tires had a width range of 160-280 millimeters. The 1981 Saab 900 Turbo’s TRX tires had a width of 180 millimeters and the 1984 Ferrari 512i BB’s tires had a width of 280 millimeters. Conventional radial tires then and to this day also have their width measured in millimeters.

The TRX package was a big hit with Mustang fans when it was released for the 1979 model year. It gave the Mustang great handling while providing a comfortable ride. This package would be expanded and offered on other Ford and Mercury models: the Thunderbird, Capri, and Cougar. During the early-1980s it seemed the TRX package was the wave of the future with even Goodyear, Continental, and few other tire makers offered TRX tires in different sizes. The wheel diameter of TRX tires was a metric measurement and not measured in inches like a traditional tire. Even today most new car tires use inches for their diameter measurements. For instance Ford’s TRX wheel and tire size was 390 millimeters which was the equivalent of around 15.3-inches. TRX wheel and and tire diameters ranged from 315 millimeters to 415 millimeters which was the equivalent of 12.4 inches to 16.3 inches.

By the late-1980s it was apparent that the TRX wheel and tire system was losing its popularity. First problem was the extra cost of owning the TRX system which wasn’t just the sometimes extra cost of the package when buying 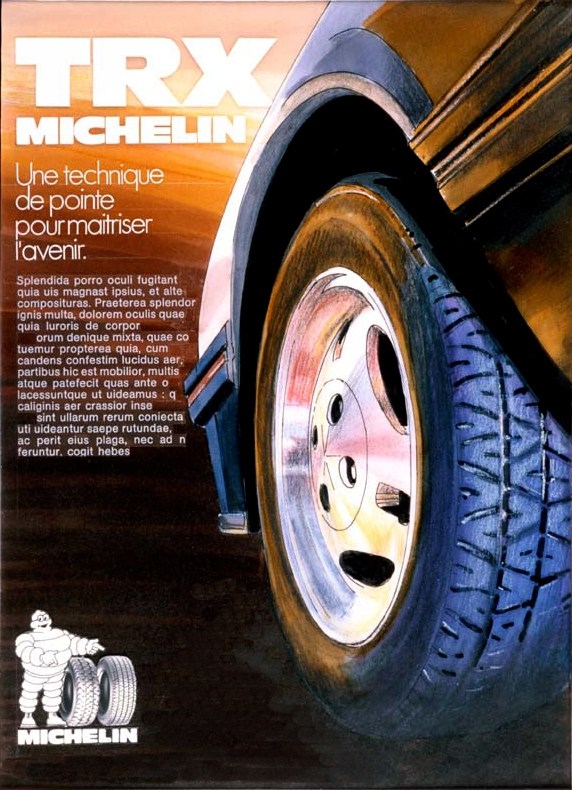 the car new but also the extra cost for the TRX tires when tire replacement time arrived. Second problem was that by the mid-1980s improvements in tire technology allowed traditional tires which cost less to match the better handling and better ride characteristics of the TRX tires. Additionally with GM and Chrysler not using the TRX technology, this meant TRX never really became mainstream in the U.S. car market. Ford would pull the plug on its TRX wheel and tire package in the mid-1980s. Some European automakers like BMW held on for longer, BMW dropped its TRX option in the mid-1990s. Due to Michelin no longer offering TRX tires in its tire lineup today, it has become more difficult for classic car owners with TRX wheels to buy replacement tires. This is why many owners of these cars with original TRX wheels, replace them with aftermarket wheels. For instance the TRX package was very popular on the 1982-1984 Ford Mustang GT, however finding one of these GTs today with the original TRX wheels has become as difficult as finding a four leaf clover. Fortunately Coker Tire offers brand new TRX tires made from Michelin’s original TRX molds in many different sizes for those who own classic cars with TRX wheels. These TRX tires may be a little pricey compared to conventional tires but it’s a small price to pay to have Michelin TRX tires on a classic car. Buying these brand new TRX tires is really the only option for those who want to drive their classic cars with TRX tires because using old used TRX tires or a set of original NOS TRX tires that have been in storage for 2 to 4 decades is not an option because they are degraded tires that are too dangerous to drive on.

For those that want to save a little money there are some aftermarket companies that produce OEM style TRX wheels that look 100% stock and use conventional tires. As an example Late Model Restoration carries an exact replica of the Ford Mustang’s TRX wheel in a 16-inch size verses the 15.3 inch size of the original TRX wheel. This allows the use of a less expensive 16-inch radial tires while still retaining the Mustang’s original factory stock look.