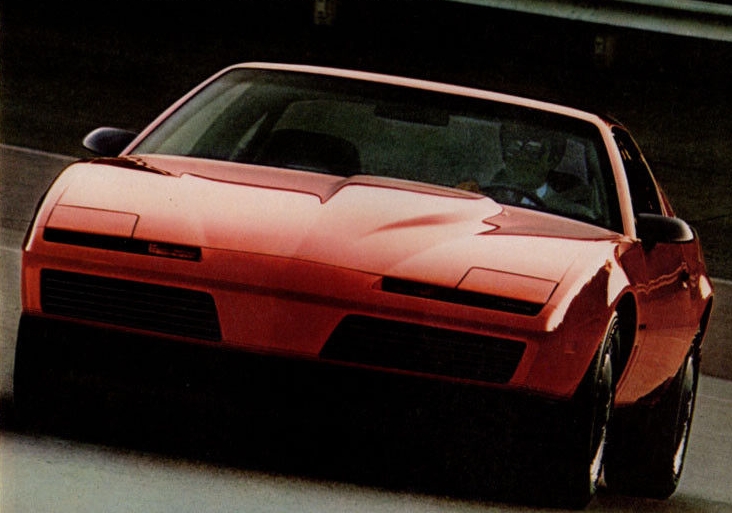 In the 1970s when most muscle cars could not survive The Pontiac Trans Am thrived. It had the looks, true muscle car image, and Pontiac 455 cubic-inch V8 and 400 cubic-inch V8 power under the hood. Horsepower and torque numbers may have been lower in comparison to original muscle car time period numbers, but in comparison to its competition at the time the Trans Am was top of the heap. The exceptions to this Pontiac 400 and 455 power rule were the California market 1977-1978 Trans Am which could only be equipped with an Oldsmobile sourced 403 cubic-inch V8 due to California emissions standards and the 1979 Trans Am which was standard with the Oldsmobile 403 and could be had with Pontiac’s 301 cubic-inch V8 as a factory delete option. Fortunately the 400 cubic-inch V8 was on the 1979 Trans Am’s option list – it was the W72 performance package 400. Pontiac packed away a bunch of them for the 1979 model year after 400 V8 production ended towards the end of the 1978 model year.

The 1981 Trans Am was built on the second generation f-body platform which had been around since the 1970 model year. For 1982, there would be a new third generation f-body platform that the Trans Am would use. It was lighter and a vast improvement over the second generation f-body platform. The 1982 Trans Am receiving a weight reduction of about 500 lbs when compared to its predecessor, Pontiac originally planned to offer as standard for the 1982 Trans Am, its 4-barrel equipped 301 cubic-inch (4.9 liter) V8 which would have been rated around 150 to 155 horsepower. Optional would have been the LU8 Turbo 301 cubic-inch (4.9 liter) V8 which would have been rated at a minimum of 200 horsepower and 340 lb-ft of torque. It was GM’s move to a new corporate engine policy in 1982, that led to GM’s decision during the 1981 model year to cancel production of Pontiac’s 301 cubic-inch and 265 cubic-inch V8s at the end of the 1981 model year. This new corporate engines policy allowed only Chevrolet, Cadillac, and Oldsmobile to produce V8s starting 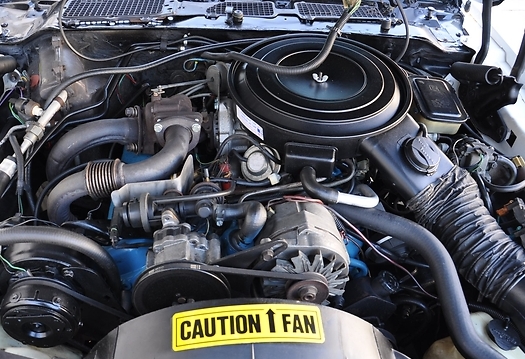 in the 1982 model year. Pontiac was only allowed to produce the 2.4 liter Iron Duke 4-cylinder. This caused Pontiac to panic since its V8s have always been the cornerstone of its performance cars.

Pontiac had to act fast when its 301 was canceled. It needed a V8 for the 1982 Trans Am and only Cadillac, Chevrolet, and Oldsmobile V8s had been green-lighted for GM’s 1982 production cars. Using a Cadillac V8 was out of the question, GM would never have allowed it back in 1982. Even if it had, the best Cadillac had to offer for 1982 was a 135 horsepower 4.1 liter V8 which wasn’t going to cut the muster in a Trans Am. Pontiac considered using Oldsmobile’s 4-barrel 5.0 liter (307 cubic-inch) V8 which produced 148 horsepower for 1982. Oldsmobile would offer a High-Output version of this engine in 1983 which produced 180 horsepower but that wouldn’t help Pontiac during the 1982 model year. Pontiac also considered using Buick’s Turbo 3.8 liter V6, which for 1982 had a 4-barrel carburetor and produced 175 horsepower. Pontiac instead came to a logical decision and went with Chevrolet’s 5.0 liter (305 cubic-inch) V8, which had been offered as a 1980 and 1981 Trans Am option in the form of a 150 horsepower LG4 5.0 liter V8. The end result was for 1982, the Trans Am received the same engine options as the 1982 Camaro Z28 – the 145 horsepower LG4 4-barrel 5.0 liter V8 and the 165 horsepower LU5 5.0 liter Cross-Fire Fuel Injection V8. Both engines produced 240 lb-ft of torque. Ironically the 1982 Trans Am’s hood bulge which was originally intended for the Turbo 301 did get put to good use with a solenoid operated cold air induction system which fed cold air into the engine through a rear facing air inlet during wide open throttle. For 1982, this ram air system was standard with the LU5 while not available with the LG4, it wasn’t until the 1983 model year that the LG4 Trans Am had the ram air option. For its January 1982 issue, Motor Trend magazine test drove a LU5 equipped 1982 Trans Am and obtained 0-60 mph in 8.89 seconds and a quarter mile time of 16.75 seconds. For a 1982 model year car, these performance times were lightning quick.

Now let’s consider would could have been, if the 1982 Trans Am had been available with the 200 horsepower Turbo 301 V8, it would have been the fastest American built 1982 model year car, easily besting the 1982 Chevrolet Corvette. Its curb weight was a super light 3,194 lbs which was lighter than the Corvette’s curb weight of 3,345 lbs. The 1982 Trans Am was the most aerodynamic car produced in America at the time with a .31 coefficient of drag which made the 1982 Corvette by comparison seem like it had the aerodynamics of a brick. The 1982 Corvette did have a 200 horsepower V8 in the form of the 5.7 liter (350 cubic-inch) Cross-Fire Injection V8. Standard was a 2.72 rear axle ratio with a 2.87 being optional. The 1980 and 1981 Turbo Trans Am had the more performance oriented 3.08 rear axle ratio, so its safe to say that the 1982 Turbo Trans Am would have had at least 3.08 rear gears or even the more performance oriented 3.23 rear axle ratio which was available as an option on the production 1982 Trans Am. 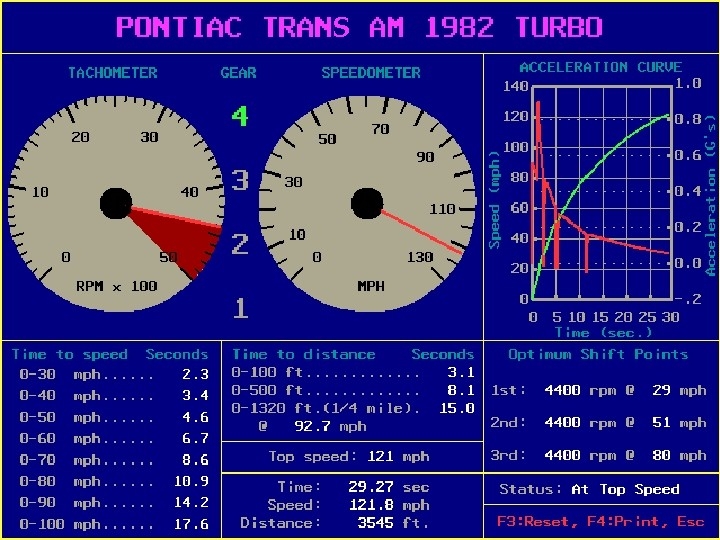 weight of 3,200 lbs. The results from the test simulation yielded a quarter mile time of 15.0 seconds at 92.7 mph and 6.7 seconds from 0-60 mph. Very impressive but how Accurate was this simulation? The use of GM’s 200-4R transmission was certainly plausible since it was available in some of GM’s 1982 model year cars and GM did offer the 200-4R at that time with the Buick, Oldsmobile, and Pontiac bell-housing which would have allowed the 200-4R to bolt directly to the Pontiac 301 engine block. However on the flip side of the coin, Pontiac could have carried over the 3-speed automatic it used for the 1981 Turbo Trans Am. The 3.42 rear axle was available in the GM parts bin back in 1982 as RPO code GU6 but it was never available on the 1982 Trans Am, but it was available on a Trans Am during other model years before and after 1982. Additionally the 3,200-lb test weight is also plausible given that a Pontiac 301 weighed around the same approximately 450 lbs that the Chevrolet 305 (5.0 liter) V8 weighed as found in the production 1982 Trans Am. Of course there’s the added weight from the turbo and its accessories to consider, however a low optioned 1982 Turbo Trans Am without air conditioning would have weighed around the 3,200-lb simulation test weight. Considering all this, the performance numbers from this test simulation seem right on target or at least pretty close. The 1982 Turbo 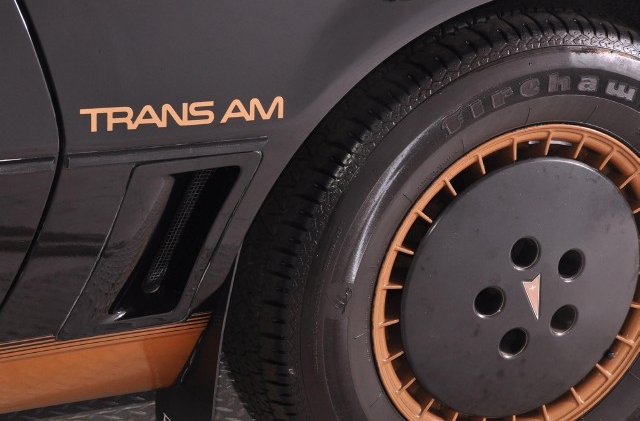 Trans Am would have easily been the fastest American production car for 1982 not to mention it would have given the best of the European exotic sports cars at the time a run for their money.

Ironically the most high performance and fastest Trans Am of the 1980s decade was the 1989 20th Anniversary Edition Trans Am which was powered by a Buick SFI Turbo 3.8 liter V6 which produced 250 horsepower and 340 lb-ft of torque. It would have been nice if GM had allowed the Pontiac Turbo 301 Trans Am to be produced during the entire 1980s decade. Like Buick’s Turbo 3.8 liter V6, the Turbo 301 would have surely received a Sequential Fuel Injection system, an intercooler, and other performance enhancements which would have made the 301 Turbo Trans Am the king of the hill. It had the potential of producing by the mid-to-late 1980s, 300 to 400 horsepower in production trim. With the third generation Trans Am’s superior aerodynamics and engine output like this would have easily yielded top speeds of anywhere from 160 to 180 mph. The saddest part of the story of the 1982 Turbo Trans Am that never made it to production, was that GM stole from the Trans Am its potential of being the 1980s decade’s fastest American production car with a genuine Pontiac V8 under the hood.