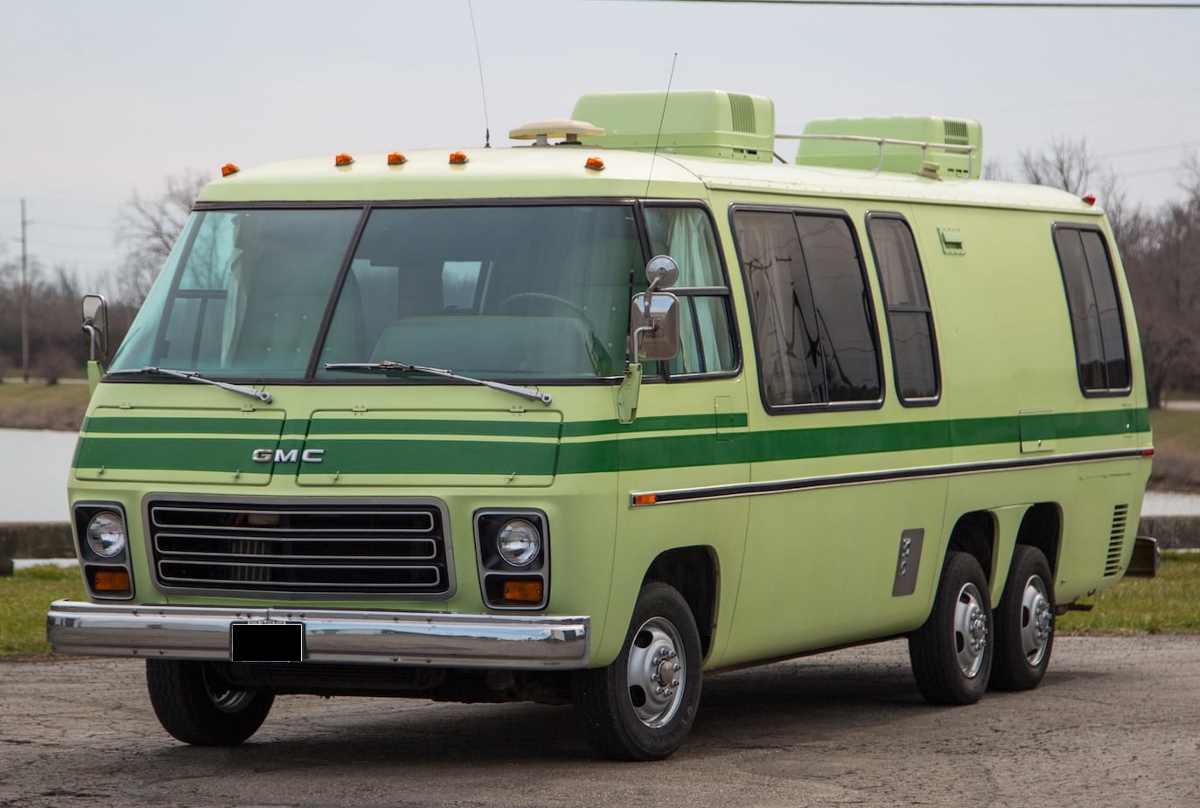 There was a time many years ago when GM was the great innovator, instead of following the trends it created them. During its golden era, GM had a knack for knowing what buyers wanted before they knew what they wanted. GM had many talented engineers who were given creative license where the sky was the limit and also given generous budgets. This was before the bean counters took control and began to exert tight control over expenditures and budgets. It was during this era of creativity and generous budgets, that GM’s GMC division released one of the most innovative, exciting, and beautiful special purpose vehicles it ever produced. No one expected a mainstream automaker to produce a Recreation Vehicle (or more commonly referred to as RV). But that’s exactly what GMC did. The end result was the 1973-1978 GMC MotorHome.

The MotorHome was a fresh design from the ground up. There were no half measures used nor were any corners cut, GMC’s goal at the time was to produce the best looking and best engineered RV the world had ever seen – it succeeded. When the MotorHome was first released, it was a massive leap forward for the RV 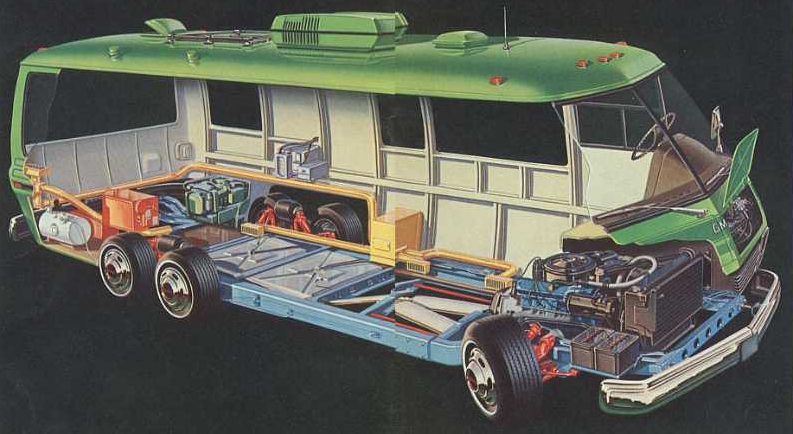 market. The MotorHome wasn’t 10 years or even 20 years ahead of its time but at least 30 years ahead of its time. One of GMC’s 1973 MotorHome ads boldly stated it doesn’t ride like a truck, it doesn’t look like a box. This ad was 100% correct, the majority of new RVs back in 1973 looked like boxes and were built on heavy duty truck platforms. GMC designed its own strong and durable perimeter frame which supported a cage of strong aluminum ribs where the light aluminum and fiberglass body panels connected to. The exterior design consisted of a futuristic science fiction type of look with lots of big curved windows. The windshield which consisted of two massive pieces of glass was curved and was steeply raked. Even the sides of the exterior were curved like an airplane fuselage. The aerodynamics of the MotorHome were incredible and so was its beautiful futuristic styling. It’s no surprise that the MotorHome became a favorite prop in many TV shows and big budget films.

So much effort was made in the MotorHome’s development to not overlook any details no matter how small. Ground clearance was extremely low in order to provide a much better center of gravity for good handling around the curves and also for easy access into the MotorHome. GMC also gave the MotorHome two wheels 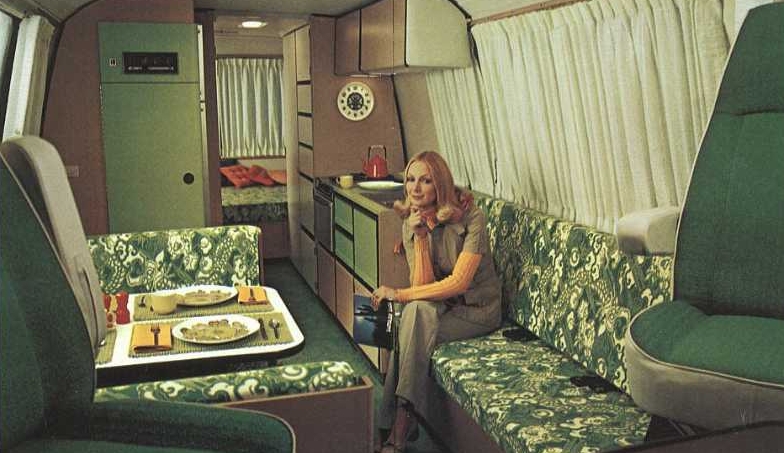 side by side on each side of the rear of the vehicle instead of the dually truck 4 wheels on one axle configuration that all the other big RVs at the time had. GMC gave the MotorHome two separate rear air suspensions with leaf springs – one for each side of the vehicle – they were mounted to the side of the MotorHome’s frame so no axles were needed. This innovative configuration provided great ride quality, good handling and allowed the inside of the rear cabin to be wider making the MotorHome more spacious than its competition. GMC also lowered the floor since the entire drivetrain was in the front of the MotorHome. GMC used the very reliable and space saving combination of the Oldsmobile 455 cubic-inch V8 and Turbo Hydramatic 425 3-speed automatic transmission which powered the front-wheels. The combo was taken right out of the Oldsmobile Toronado. For 1977 and 1978 the 455 V8 was replaced by Oldsmobile’s 403 cubic-inch V8. Using this front-wheel drive setup meant the MotorHome didn’t waste space on the traditional rear wheel drive transaxle and rear axle, this allowed GMC to give the MotorHome a flat floor and yet still have enough room under the floor to have 2 large gas tanks with a total capacity of 50 gallons. Braking was also very good, the front wheels had large disc brakes and the four rear wheels had large drum brakes. 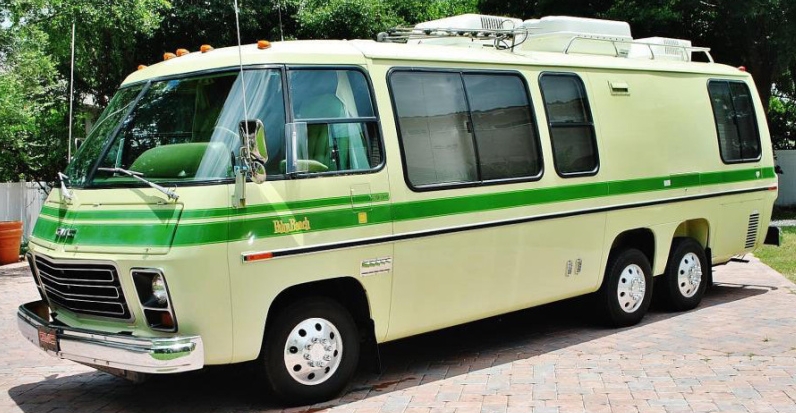 Worth noting, Revcon for 1971 began producing a front-wheel drive large RV that had a frame and support structure similar to the GMC MotorHome however it had the shape of a city bus. Additionally there were a few other RVs produced just before or around the time of the MotorHome which had a front-wheel drive configuration. However the simple truth was no one produced a futuristic RV during the MotorHome’s production cycle that was as great looking, with all the great features, and as well engineered as the Motorhome. During 6 years of production, 12,921 MotorHomes were produced which made the MotorHome a successful endeavor. It was a profitable vehicle for GMC. And it was very reliable. It is estimated that today, forty years after production ceased, that approximately 8,000 are still running and road worthy. 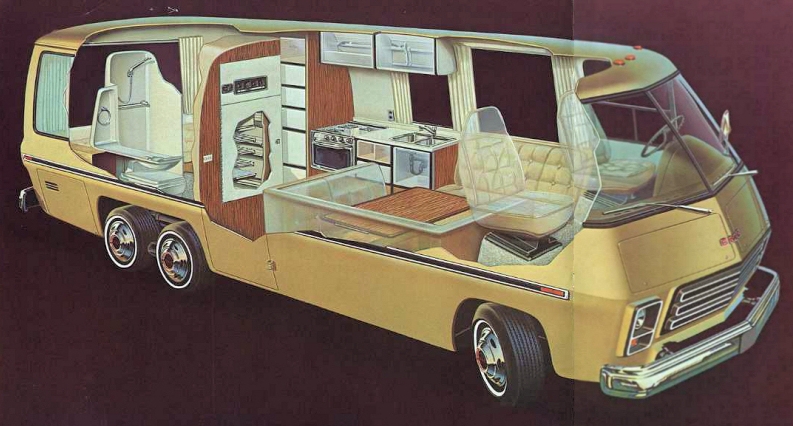 So now comes the big question, why did GMC cancel the MotorHome? The official answer is GMC wanted to devote the MotorHome’s production space to its truck line. The translation was GMC thought producing trucks to be more profitable than the MotorHome. This decision turned out to be a short sighted bean counter decision. The MotorHome was built during a period of high gas prices and a hard economic times, yet it still sold very well. If GMC had continued to produce the MotorHome through the booming economic times of the 1980s its popularity and production would have expanded and would have probably continued to this day. Today RVs are very profitable and very popular, GMC if it currently produced a newer version of the MotorHome would more-than-likely rule the RV market or at least have sizable chunk of it. The short life of the MotorHome is a textbook case of the bean counters winning, but that shouldn’t stop you from buying one of the many vintage GMC MotorHomes currently available. The 1973-1978 GMC MotorHome is the ideal solution if you want a beautiful and reliable RV that costs a lot less and has better styling than any of the new large RVs currently on the road.