Pillage Your Nest Egg to buy a 2022 Ford Bronco Raptor? 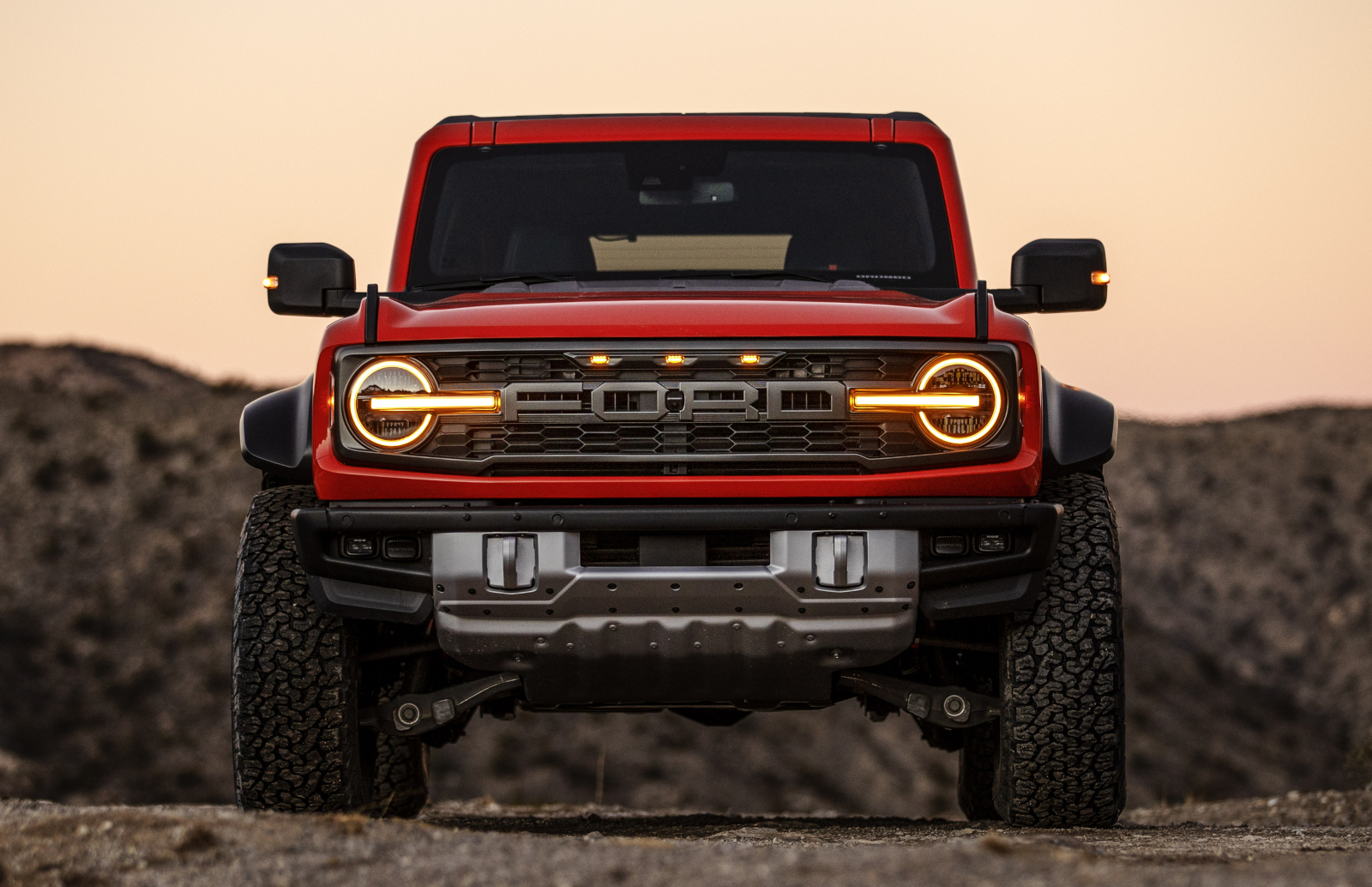 With Ford currently not able to handle the extremely high demand for its Bronco and with many buyers who ordered over a year ago still waiting patiently for their Broncos to start production, Bronco prices are averaging above MSRP. It’s not hard to imagine how crazy the upcoming low production 2022 Bronco Raptor’s purchase prices are going to be. If the recent Barrett-Jackson Palm Beach, Florida auction of the first production 2022 Bronco Raptor which sold for $350,000 is any indicator, it’s not beyond the realm of possibility for prices after markups to exceed $100,000 especially for those buyers buying right off the showroom floor because they didn’t order one before the 2022 allotments were all taken.

The recent Barrett-Jackson Palm Beach auction of the Bronco Raptor was for charity which in most cases usually yields considerably higher prices than a regular auction. With all the fanfare surrounding the Bronco Raptor which takes the already capable Bronco to the next level of off-road prowess, it is no surprise it will have an estimated base MSRP price of 69,995 making it by far the most expensive Bronco you can buy. However it will have Ford’s HOSS 4.0 Suspension and massive 37-inch tires which will equate to a 86.9-inch track width and the biggest fender flares you have ever seen on a factory stock 4×4. 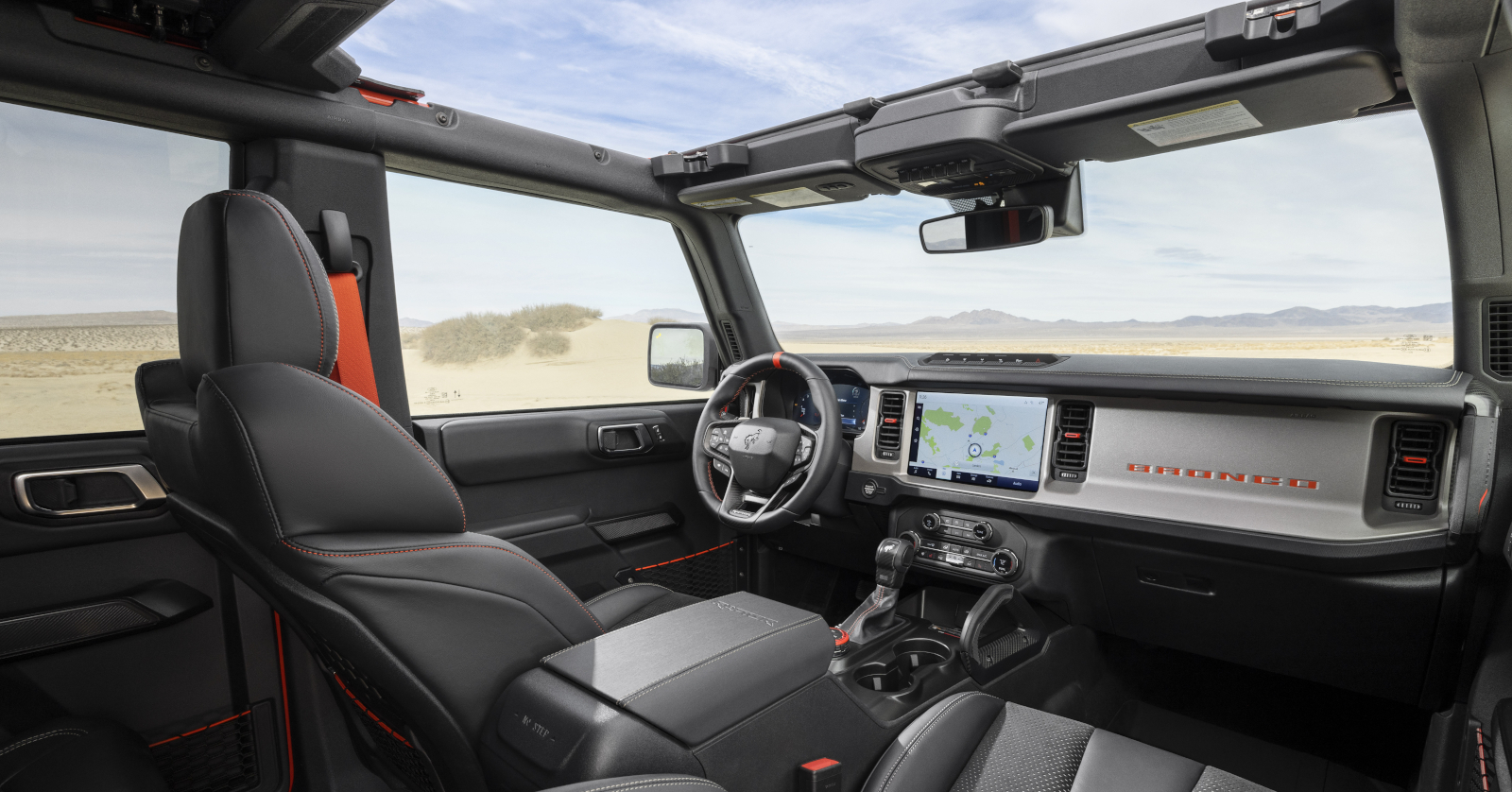 Under the hood will be Ford’s high-performance twin-turbo 3.0 liter Ecoboost V6. Ford has not released horsepower or torque numbers yet. However it should produce anywhere from 400 to 450 horsepower proving some very quick acceleration and a nice step up from the next best Bronco lineup engine the 330 horsepower twin-turbo 2.7 liter Ecoboost V6. Unfortunately the Raptor’s 3.0 liter Ecoboost won’t be fast enough to best the lightning quick acceleration of Jeep’s current ultimate off-roader and the Bronco Raptor’s main competitor – the 2022 Wrangler Rubicon 392 which has a 470 horsepower 6.4 liter HEMI V8 and is good for 0-60 mph in just 4.5 seconds. Additionally the Wrangler Rubicon 392 with its active exhaust system provides that perfect V8 muscle car sound to accompany the quick acceleration. 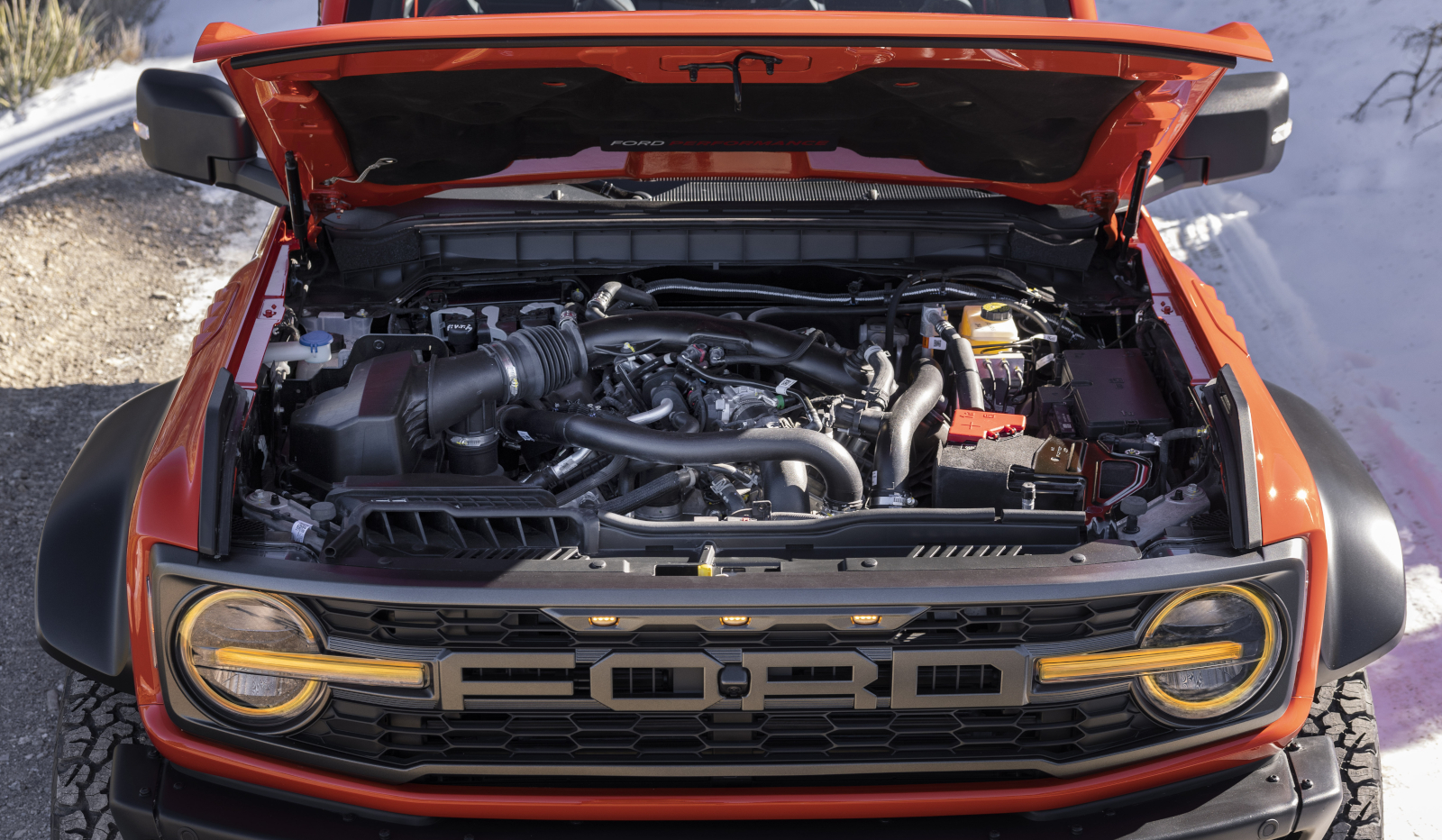 Though the Bronco Raptor will have a performance tuned exhaust system, it’s not going to hide the fact that there’s a high pitched sounding low-displacement V6 under the Bronco Raptor’s hood. This would be an easy fix if we could convince Ford to add the 2022 Mustang Mach 1’s 480 horsepower 5.0 liter Coyote V8 to the Bronco Raptor’s option list. Of course Ford’s simple answer is the V8 won’t fit, that’s not a new answer, it’s more of a copout. It was given back in 1989 when a new Thunderbird debuted without a V8 option, by the 1994 model year Ford found a way to make a V8 fit, and the V8 option returned to the Thunderbird. Additionally Ford will also be producing a low production for “off-road use only” 2023 Ford Bronco DR (DR stands for Desert Racer) which will be standard with the Coyote 5.0 liter V8. Perhaps Ford will see the light and offer in the Bronco Raptor model a V8 option in the near future like it will for the upcoming F150 Raptor R. 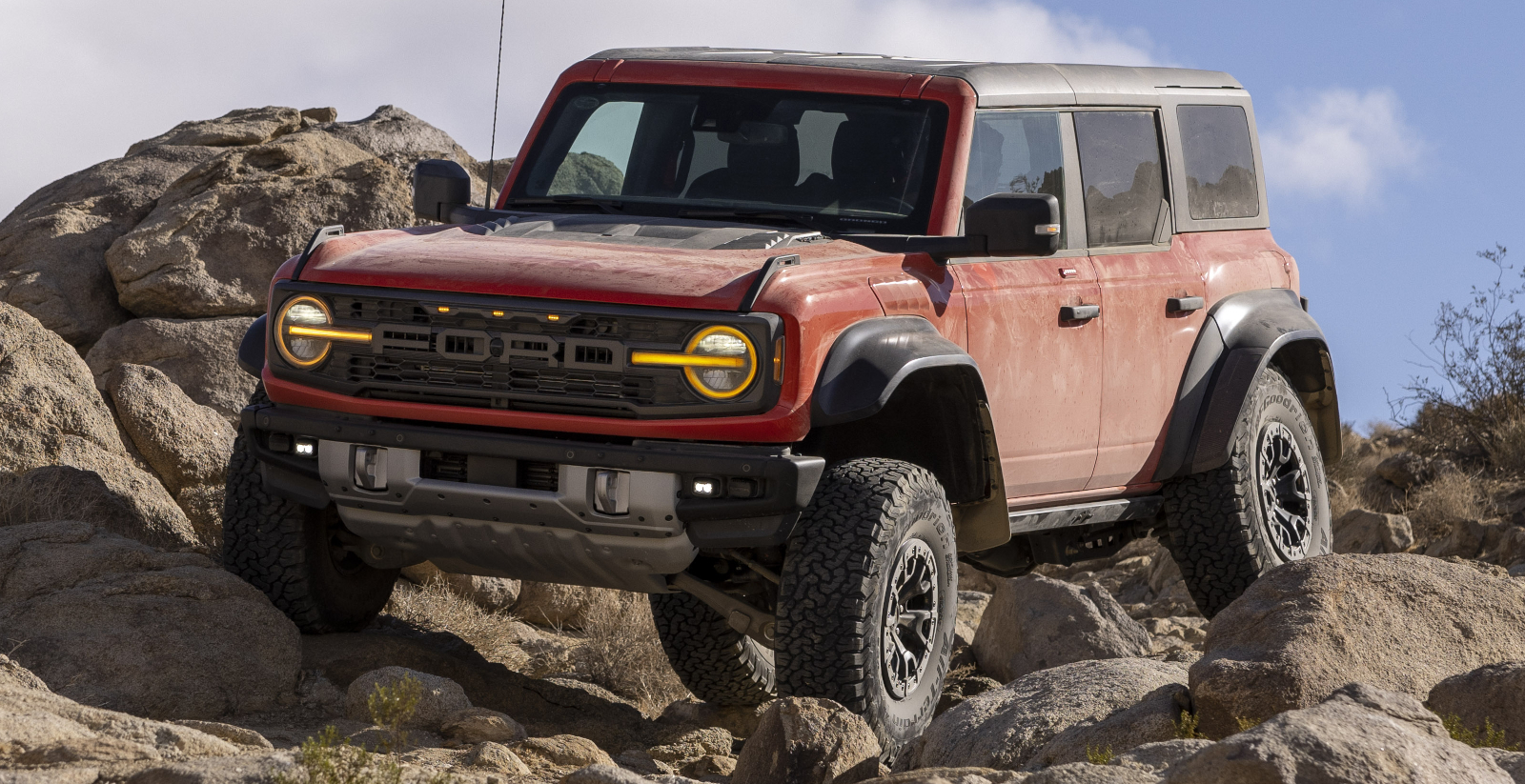 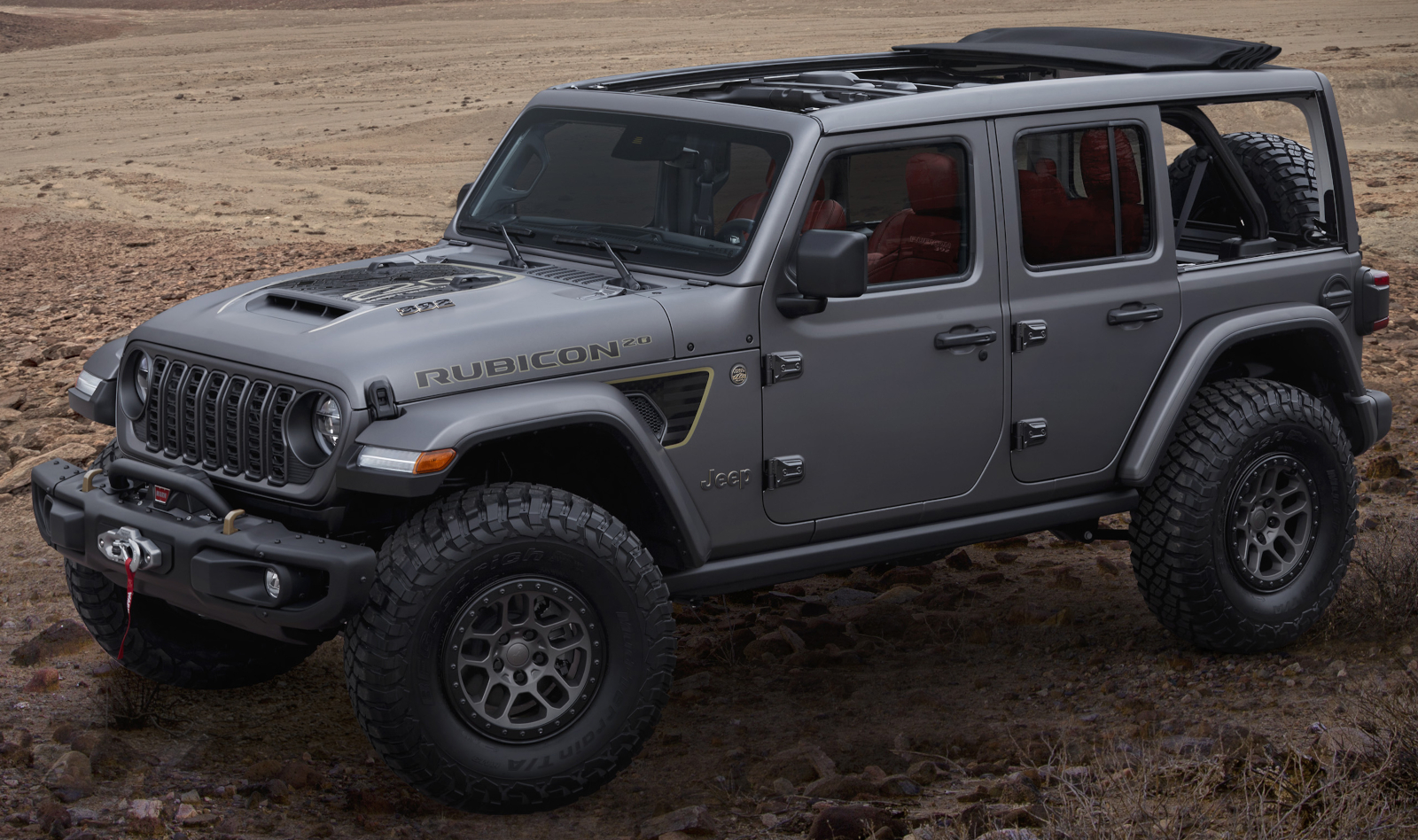 Don’t expect Jeep to let Ford cross into it’s territory with the Bronco Raptor without a serious counter-response. Jeep just unveiled its 2023 Jeep Wrangler Rubicon 392 20th Anniversary Edition Concept (as shown in the picture above) with a 2-inch lift and 37-inch tires which appears to be more of a production ready glimpse at its ultimate Wrangler for the 2023 model year rather than a concept vehicle. Both Bronco fans and Wrangler fans will continue to reap the rewards from this new Bronco vs Wrangler rivalry, as Ford and Jeep continue to engage in fierce competition in the pursuit to build the ultimate off-road capable 4×4. Ain’t competition great?

The 2022 Bronco Raptor will definitely be a big game changer. Unfortunately in the current new vehicle sales climate of high demand, over MSRP pricing, and production slowdowns due to supply chain issues don’t expect to get a good deal on a 2022 Bronco Raptor unless you happen to be one of the extremely lucky few that have already submitted an order for MSRP. If not and you’re able to buy one in the near future, when you drive it you’ll feel like you won the lottery even though you pillaged your entire nest-egg to buy a Bronco Raptor. It’s a small price to pay to own the only 2022 model year SUV with a factory stock heavy-duty off-road suspension with 37-inch tires.