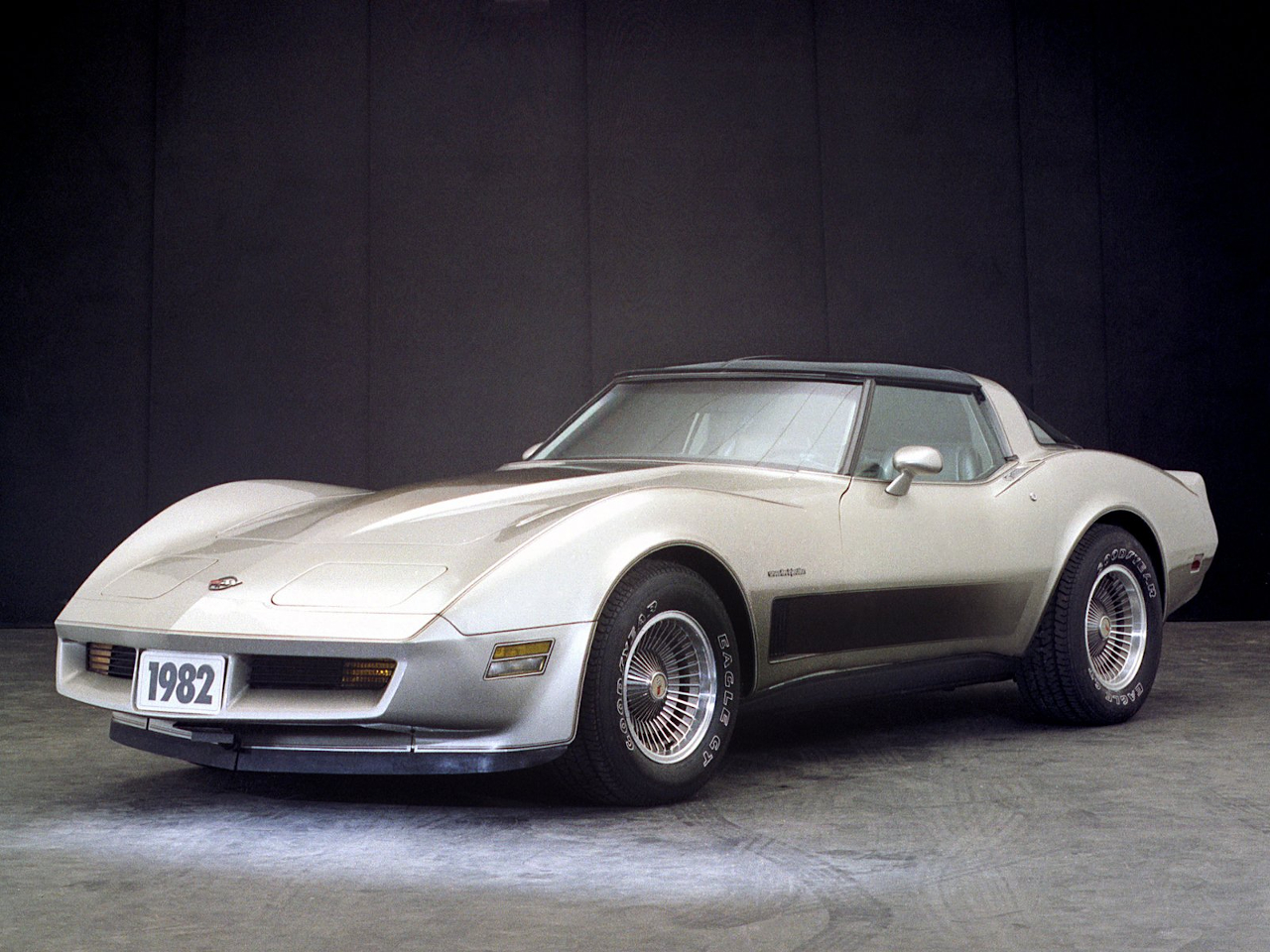 Let’s rewind back to 1981, the U.S. was encountering a very serious recession. New luxury cars overall were having a difficult time find buyers. Then add to the mix, car loan interest rates were on the average a very high 14 percent, with some financial institutions charging as much as 19 percent which also hurt car sales. American automakers were at this time trying to keep as low as possible the prices of the few performance cars still around, in order to keep sales volume up. In the preparations for the 1982 model year which began around September 1981, Chevrolet was finalizing it’s pricing for the last model year of the third generation Corvette or more commonly referred to today as the C3 Corvette. Chevrolet decided for the C3’s last model year to raise it’s base price from 1981’s $16,258 to $18,290.

This appeared to be foolishness amid a very bad recession and extremely high car loan interest rates. But that’s not the end of the story, Chevrolet decided for the C3’s last model year to offer a special edition of the Corvette, called the Collector Edition which would have a base price of $22,537. This base price was off the charts, never had a new Corvette before even adjusted to inflation had such a high base price. It was higher than both Chrysler and Lincoln’s most expensive 1982 model year luxury cars. The most expensive new American luxury car back in 1982 was the Cadillac Seville which had a base price of $23,433. This was only $896 more than the Corvette Collector Edition which was a Chevrolet that was more expensive than all the other 1982 Cadillac models. If Cadillac hadn’t produced the Seville for 1982, the Corvette Collector Edition would have been more expensive than every mass produced 1982 model year American car.

Take note of the following figures to understand how drastic Corvette prices had skyrocketed in less than a decade. For the 1976 model year the Cadillac Seville was the most expensive American luxury car with a base price of $12,479. As a comparison 1976 Corvette’s base price was $7,604 which was nearly half of the 1976 Seville’s base price. 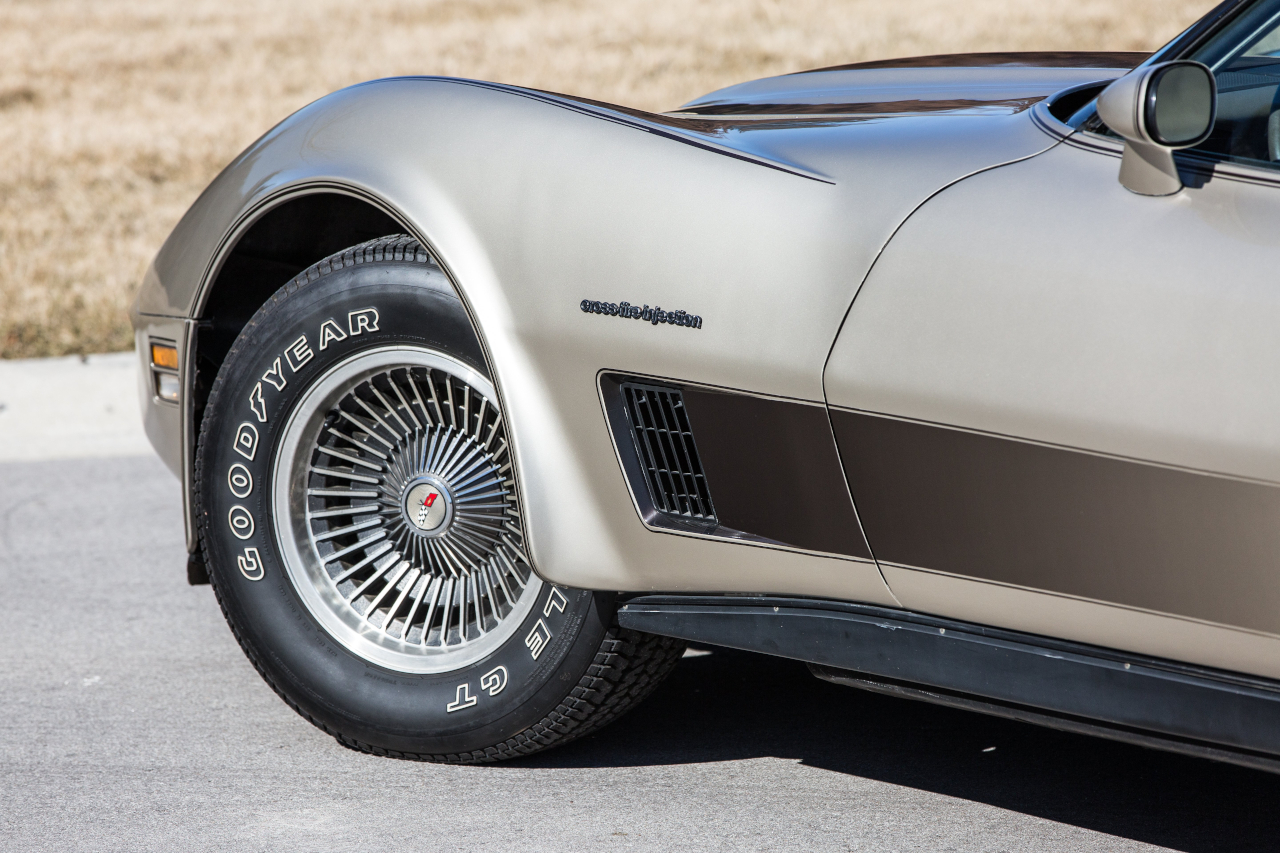 In 1982, GM’s most inexpensive car brand was Chevrolet and Cadillac was GM’s most expensive. In 1982, Chevrolet with the Corvette had one thing that no other 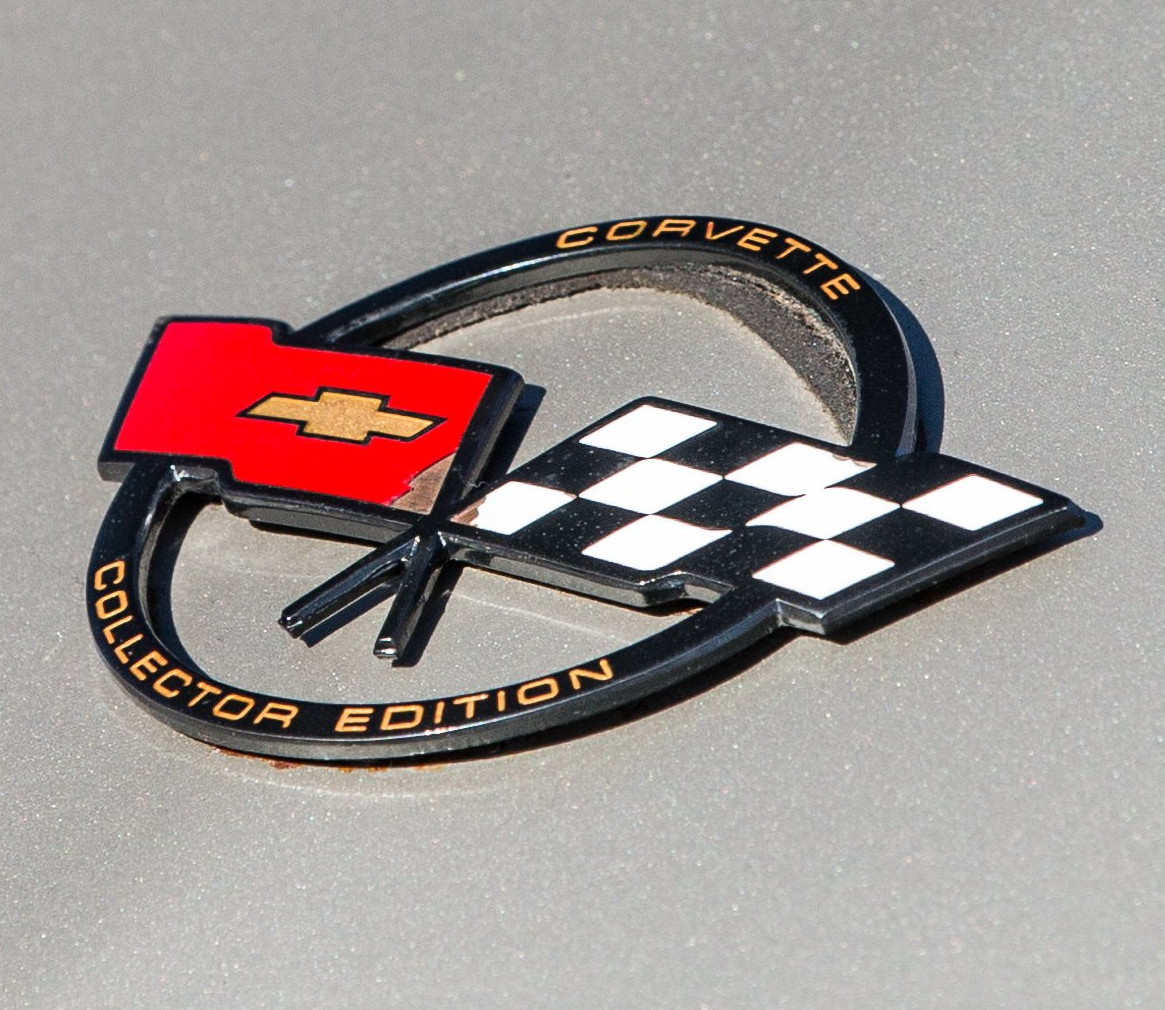 GM division had including Cadillac, and that was a 2-seat sports car. As Corvette sales flourished as the 1970s decade progressed, Chevrolet felt comfortable substantially increasing the Corvette’s base price. By the late-1970s the Corvette was still a quick accelerating car by 1970s decade standards but it paled in comparison to the high-performance Corvettes of the 1960s decade. Chevrolet could no longer market the Corvette as an ultra high performance car in the new era of emissions controls and Corporate Average Fuel Economy standards. This is why Chevrolet starting in the late-1970s made the Corvette flashier by improving its appearance and appeal with spoilers and more standard features, new options, and new luxury options. Not to mention Chevrolet released during this time a few very pricey special edition Corvettes which helped to keep buyers interested in the Corvette.

Chevrolet’s parent company GM, at this time had to devote a lot of resources to downsizing its cars and on new vehicle technologies due to the new emissions standards and the Corporate Average Fuel Economy standards. GM didn’t have the money in the 1970s to spend on an all new Corvette. This is the reason the 1968-1982 C3 Corvette had such a long production life. By 1982, its overall design was was still 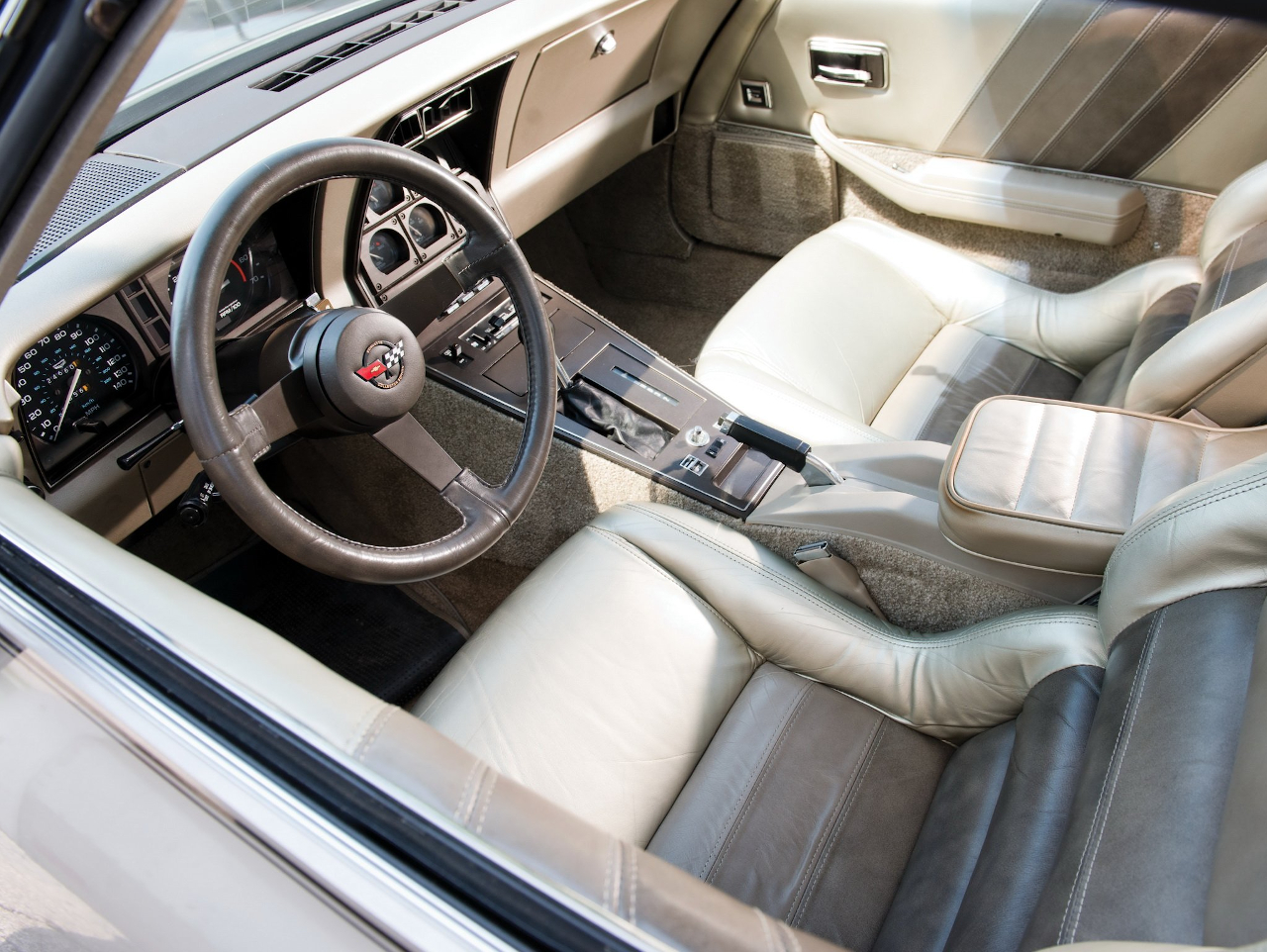 attractive but it by this time long overdue for a replacement. Chevrolet has to be given an A+ grade for its ability to continue to keep sales up by gradually modernizing and updating the C3 during its 15 production years.

Chevrolet also had another hurdle for 1982, word had already gotten out that an all new fourth generation Corvette (more common referred to today as the C4) would debut in 1983, which it did in March 1983 as the 1984 Corvette. This had many potential buyers passing on the 1982 Corvette because they were waiting for the release of the all-new C4 Corvette. Chevrolet produced 25,407 Corvettes for the 1982 model year which was down considerably from 1981’s production total of around 40,000 units. 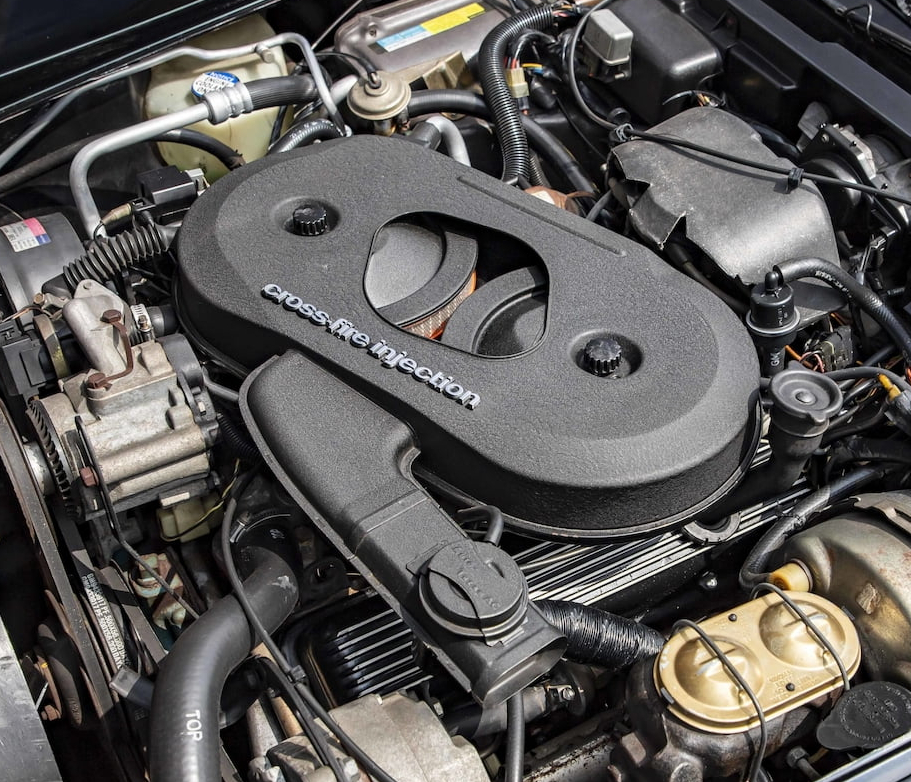 lot. It was subjectively the best looking C3 ever produced and at the time offered so many standard luxury features such as leather seats, a opening glass hatchback, unique finned aluminum wheels, a unique silver-beige exterior color with gradated decals, and many other features. It was a perfect tribute to the end of 15 successful years of C3 Corvette production. Not to mention it had a 200 horsepower and 285 lb-ft of torque Cross-Fire fuel injection 5.7 liter V8 and a great handling suspension by 1982 standards. Even with a mandatory 4-speed automatic transmission, it was the fastest accelerating American car in 1982. 0-60 mph took 8.1 seconds and the quarter mile was 15.9 seconds at 86 mph. The Corvette Collector Edition may have been expensive but it was still the best American performance car in 1982 and was worth every penny of its high price.

Today buyers have become accustomed to the Corvette being GM’s flagship car and its base base price being in luxury car territory. However the 1982 Collector Edition was the first Corvette to have a luxury car price. Ironically, it had been forgotten for many years by the car collector crowd it was originally marketed to. Thereby making the Collector Edition for many years a real bargain among classic Corvettes. However those days are now ending, in recent years 1982 Collector Edition values on the car collector market have been skyrocketing. When compared to modern high-performance Corvettes, the Collector Edition may be lacking in performance and handling but in those areas it still provides a fun driving experience. Not to mention it was one of best looking and unique Corvettes ever produced.