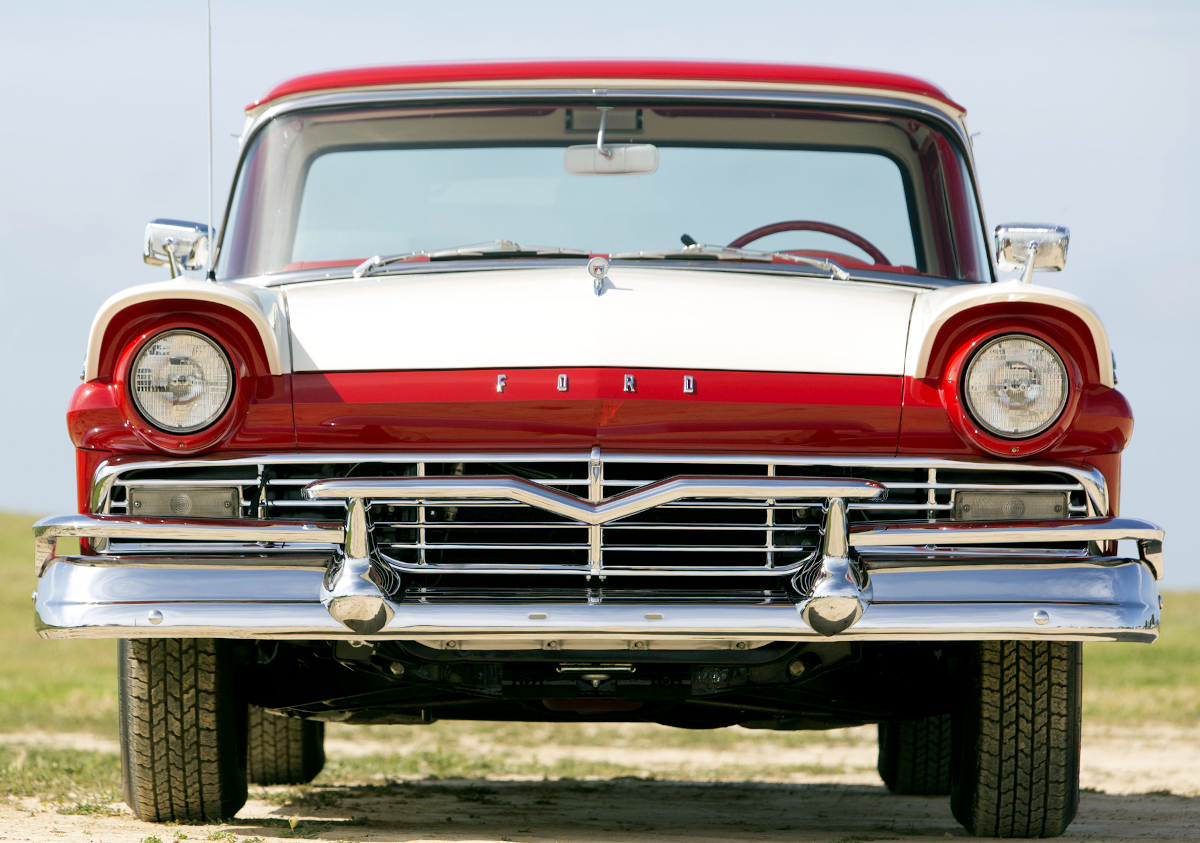 The 1950s is considered the beginning of the golden era of the automobile especially in the United States. There were many different automobile brands during the 1950s. Many of these 1950s cars fit a standardized mold of exterior and interior styling and engineering. However there were a good number of 1950s cars that didn’t follow these standards. Here’s a list of the five 1950s cars that didn’t fit the mold and were very weird but they found a dedicated audience who adored these cars and even today these cars have many fans.

When Studebaker released to the world for the 1947 model year, its entire car lineup with new exterior styling, it foreshadowed what cars would look like in the 1950s. For the 1950 model year Studebaker gave its entire car lineup a significant mid-cycle update which included a radical front-end redesign that lasted two model years. The 1950-1951 Studebaker models were available in both 2-door and 4-door configurations and these Studebakers had very strange look with this new front-end which had a bizarre torpedo look that made these Studebakers look like nothing else on the road at the time.

The 2-door Studebaker models had strange exterior proportions where the trunk area from some viewing angles looked longer than the hood area. Even with the bizarre styling the 1950-1951 Studebakers encountered very good sales. For 1953 Studebaker gave all its car models a more modern and streamlined exterior design and the torpedo look was history. Even today while many cars from the 1950s have been forgotten, the 1950-1951 Studebakers today have a very loyal fan base. 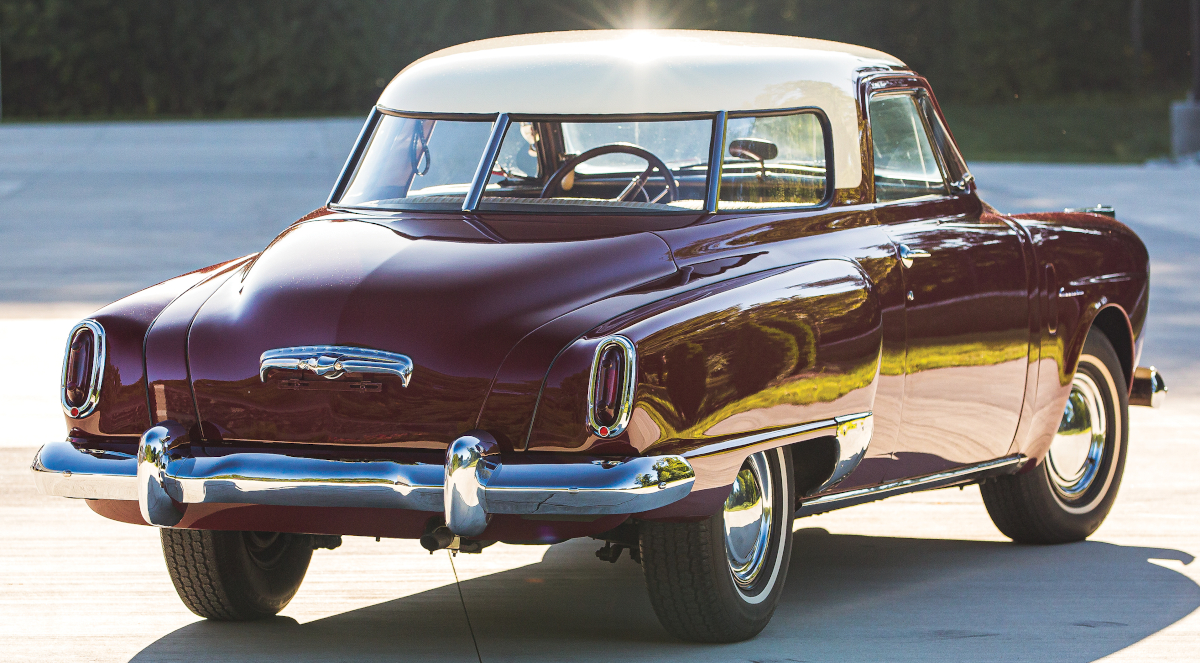 When the original Volkswagen Beetle or usually referred to as VW Beetle first arrived in America for the 1949 model year it was so much different than the average American car at the time. It was tiny by comparison, and had an odd shape that looked like a bug which is why it was nicknamed the VW Bug. Not to mention the Beetle’s engine was in the rear of the car and it was an air-cooled flat 4-cylinder engine which only produced 30-36 horsepower during the 1950s depending on model year.

Though it had seating for four adults and had reasonable headroom it was not as spacious in the interior as the average American car. However many American car buyers revered the VW Beetle. It was reliable, easy to drive, easy to maintain, and easy to park in very tight parking spaces. The little Beetle had character that appealed to many American car buyers in all income brackets. Overall the Beetle was a fun utilitarian, its sales skyrocketed in the 1950s and 1960s. The original Beetle’s appeal was so great that it was available in the U.S. market through the 1979 model year and led to the return of the Beetle in the form of the modern retro 1998-2019 VW Beetle. 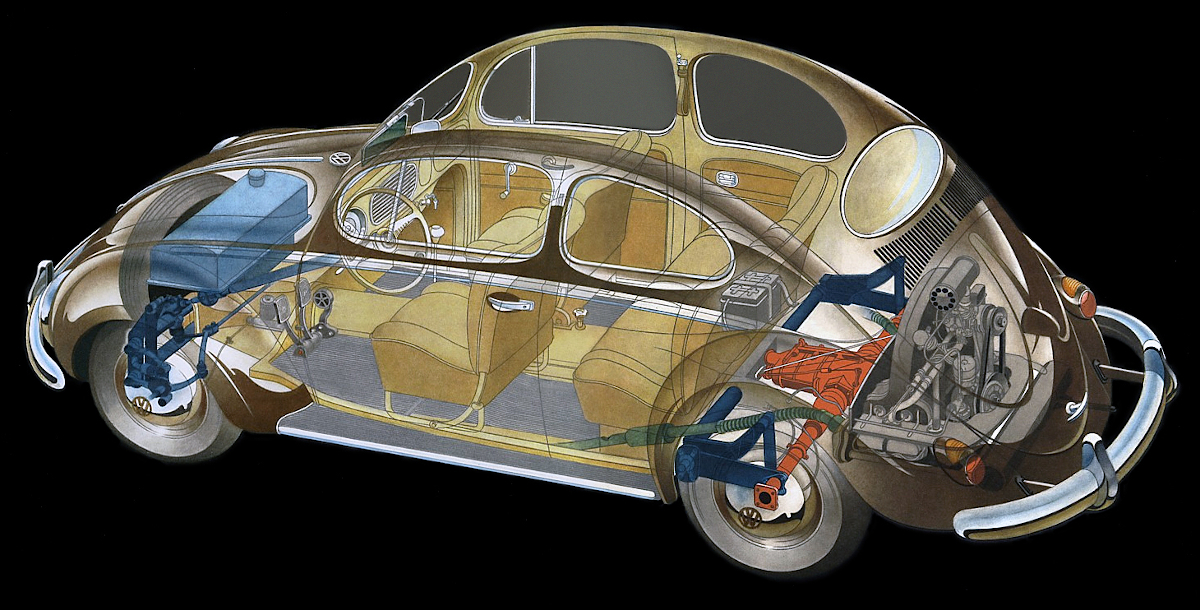 By the 1950s, if a customer wanted a large exterior cargo box, a pickup truck was the only way to get to get this exterior cargo capacity. Ford decided for the 1957 model year to offer the first car based pickup called the Ranchero which was built on Ford’s full-size car platform at the time. It looked like a 2-door full-size Ford except behind the front bench seat was a pickup truck style flat rear window and a cargo box that was surrounded by the same body styling found on the full-size 1957-1959 Ford models. The Ranchero’s rear quarter panels, rear styling, along with the rear tailgate were borrowed from Ford’s 1957-1959 full-size station wagon models. Chevrolet for the 1959 model year would release its Ranchero competitor, the El Camino which ironically long term became America’s most popular car based pickup.

What the first generation 1957-1959 Ranchero offered to buyers was a full-size car ride, car interior, car exterior styling, and the utility of a traditional pickup truck. The 1957-1959 Ranchero may of appeared strange to most people back in the late-1950s, however during its long 23 model year production run the Ranchero became mainstream and very popular with pickup truck buyers who wanted a pickup that looked like a car and drove like a car.

In the 1950s American cars were large cars in comparison to the cars manufacturered in other areas of the world at the time. Contrary to most 1950s American Automakers Nash had the foresight to see the need for a small American car, so it debuted for the 1954 model year the Metropolitan. It was the perfect car for an urban environment of heavy traffic and small parking spaces. Think of the Metropolitan as the American smart car of its era, due to its small size and mission. Compared to the VW Beetle it was smaller and weighed less.

It was also quirkier than the Beetle in that it had a backseat that was so small most were too big to sit there and this backseat had to be folded down to access the trunk until 1959 when an external opening trunk was added. For a short period the Metropolitan was also sold with slight cosmetic changes under the Hudson car brand. later on it was just sold as the “Metropolitan”. The Metropolitan was built in England at an Austin Motor Company factory and powered by Austin 4-cylinder engines. The Metropolitan was produced for 8 model years. It wasn’t the big sales success Nash originally expected due to American buyers not being ready for a very fuel efficient compact car. However today the Metropolitan is more popular than many cars from its era due to its uniqueness.

If you think car platform sharing among different automakers is a recent phenomenon, you would be wrong. Back in the early 1950s Iso Autveicoli an Italian automaker released the Isetta which was a 2-seat microcar that was produced for the Italian car market. Iso Autveicoli allowed four other companies in other countries to produce the Isetta for their respective home and other automotive markets. BMW was one of those companies, it made two models the Isetta 250 and Isetta 300. Additionally BMW produced a three wheel version of the Isetta. BMW also produced a 4-seat version of the Isetta called the BMW 600. 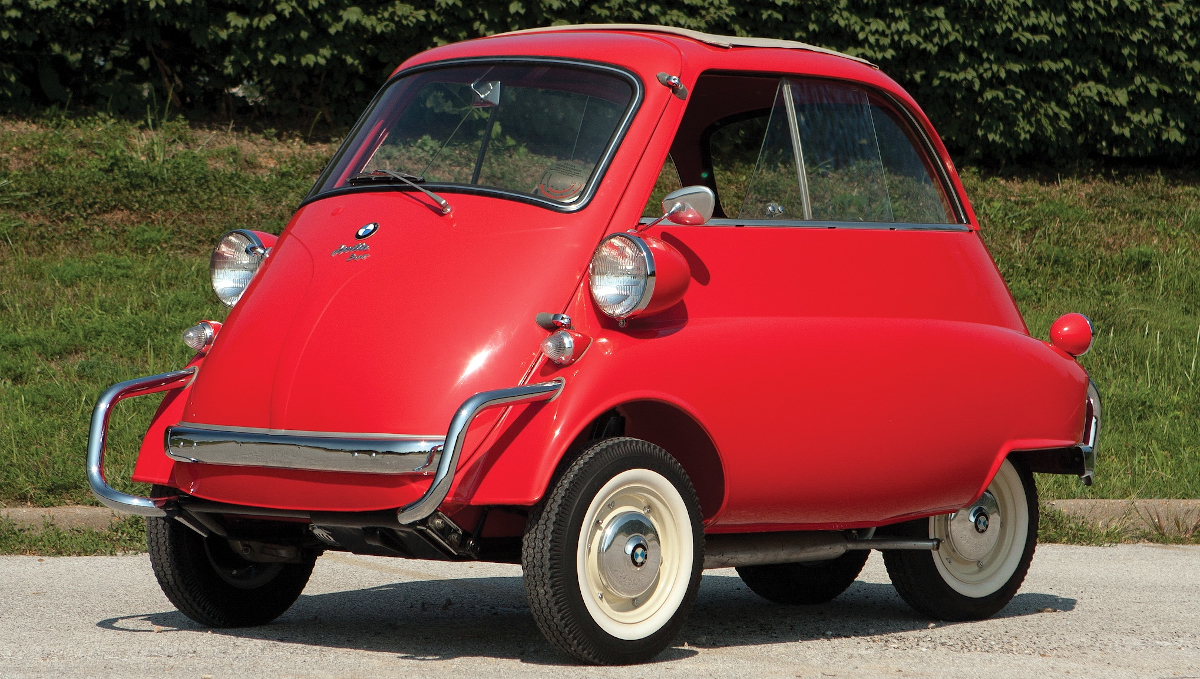 Even though the Isetta was produced by different companies it was the BMW Isetta that has become a legend due to BMW adding engineering improvements and giving its Isetta more character than the other manufacturers’ Isettas. The Isetta’s front end was essentially one big door that opened up to allow the two passengers to enter from the front of the car. The Isetta was even smaller than the Metropolitan and VW Beetle and capable of 80 mpg back in the 1950s from its BMW motorcycle derived single cylinder engine. Even though the Isetta never sold in large numbers in the U.S., it has become a very popular car at classic car shows in the U.S. due to its unique platform, styling, and features. 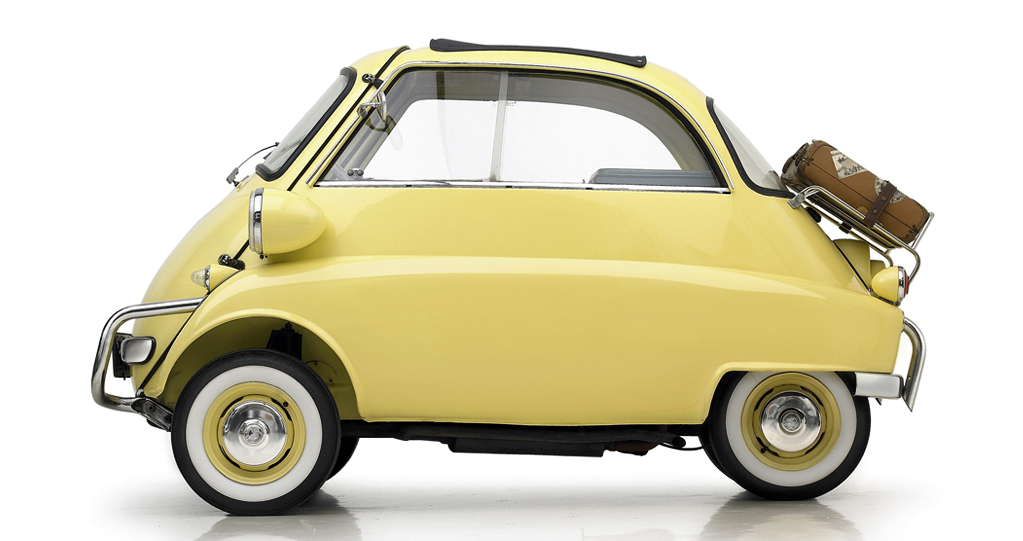