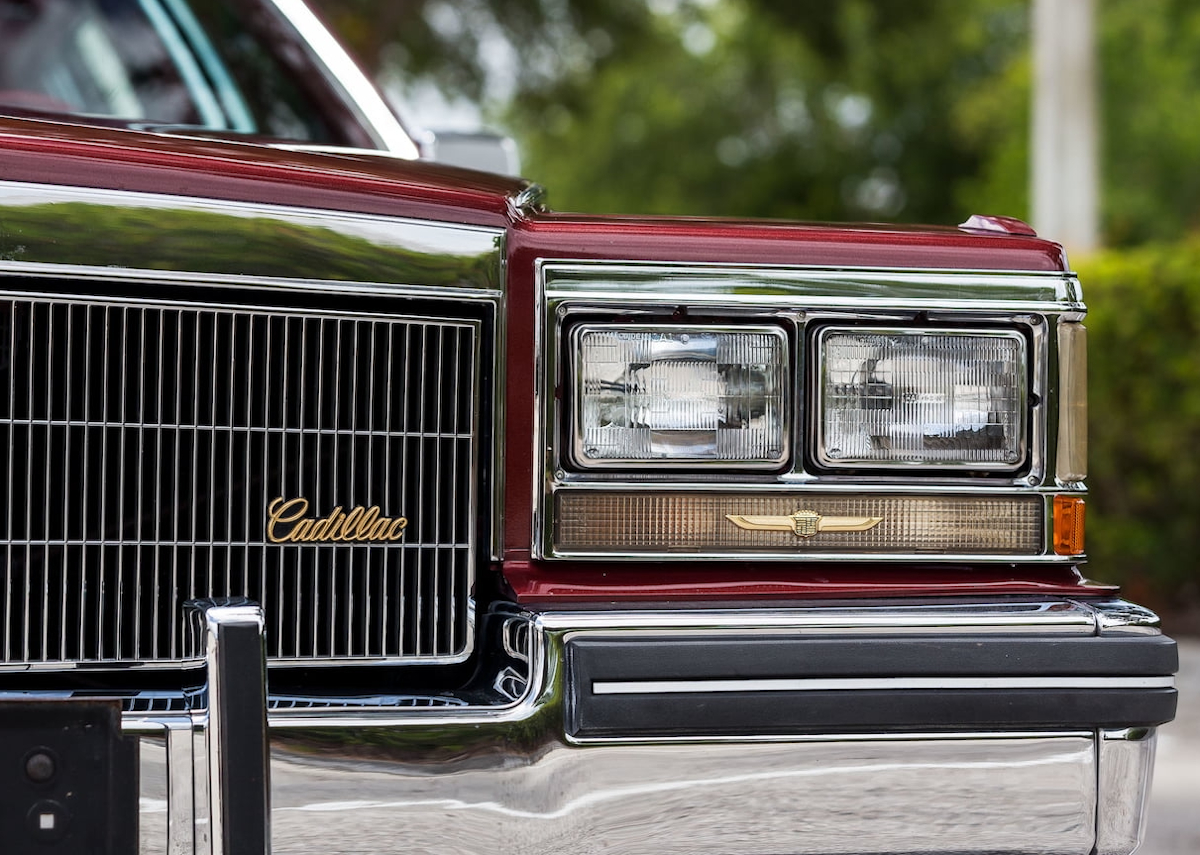 When the Cadillac Seville debuted for the 1976 model year, it was Cadillac’s most expensive car model and it was by far it’s smallest. It was a big seller for Cadillac. When Cadillac introduced the all-new second generation Seville for the 1980 model year it kept the first generation Seville’s 204 inch length but gave the Seville which was a 4-door sedan a radical redesign. This included the typical long hood found on many luxury cars and a new bustle-back rear trunk design which was reminiscent of the vintage coach-built Rolls Royces. This new Seville was a sales success for Cadillac.

Cadillac for 1980 also converted the Seville from rear-wheel drive to front-wheel drive and most buyers didn’t care. Though the 1980-1985 Seville was considered a mid-sized car it was a larger mid-sized car, had elegant and attractive looks, and it offered more luxury and convenience options than the competition. For luxury car buyers back in the day, it was a must have car. There were different gasoline V8 engines and a diesel 5.7 liter V8 engine offered during its 6 model year production run. There was even a fuel efficient 4.1 liter V6 available for the 1981 and 1982 model years. The most notorious second generation Seville engine was the fuel-injected 6.0 liter V-8-6-4 multi-displacement engine which was plagued with electronic engine management issues. The most popular engine choice from 1982-1985 was Cadillac’s compact sized 4.1 liter V8 which produced a paltry 125 horsepower for 1982 and 135 horsepower for 1983-1985. However most Seville buyers didn’t care since underpowered V8 engines were the norm during this era, and it did provide very smooth acceleration.

1981 was a big transition year for the Chrysler Corporation, it was the year it released it’s compact front-wheel drive K-car platform. The K-car platform took the Chrysler Corporation in a new direction and ended up being the basis for its most successful 1980s new car releases. Ironically this was also the model year Chrysler released the ultimate 2-door luxury coupe, the rear-wheel drive 1981 Imperial. Its overall large size and roomy interior followed the same successful formula of the 2-door luxury coupes that sold well during the 1970s decade. However the 1981-1983 Imperial’s exterior was the successful fusion of traditional luxury car styling cues and very modern aerodynamic streamlined design.

The Imperial also had laundry list of luxury and convenience options which placed it in the top tier of luxury cars in its day. Even with Frank Sinatra as a spokesman for the new Imperial and the release a special Frank Sinatra edition of the Imperial, could not prevent the Imperial from being a sales flop. The problem was the combination of a luxury car price tag and a debut during one of the worst recessions in U.S. history when luxury car sales were way down. Not helping the situation was the Imperial’s fuel-injected 5.2 liter V8 which was had electronic engine management related problems. Never-the-less the Imperial was a grand luxury car with beautiful styling that has stood the test of time and even though sales weren’t good, it was still one of the best American luxury car offerings of the 1980s.

Though the Lincoln Town Car first debuted for the 1981 model year as its own model and before that had been a Lincoln Continental trim level model for several years, it didn’t mature into the ultimate 1980s luxury car until the 1985 model year. The 1985 model year provided a mid-cycle platform update which gave the 4-door Town Car a more streamlined look. The front-end had only very slight changes but the former squarish rear trunk-area design with tailfins was replaced with a new streamlined trunk area with modern vertical taillights and a large horizontal red reflector panel which gave the Lincoln Town Car a more modern look.

The 1985-1989 Town Car had the distinguished large car styling that luxury car buyers wanted along with plenty of luxury and convenience options. Also available were special luxury editions such as the Cartier Edition. The Town Car was equipped with an electronic fuel injected 5.0 liter V8 that produced 140-160 horsepower and 250-280 lb-ft of torque which was good output for its day. This engine from 1986-1989 used a port fuel injection system while the 1985 version of this engine used a more traditional throttle body fuel injection system. When most American luxury cars were shrinking in size the Town Car remained a large car which was built on Ford’s rear-wheel drive Panther platform. It was the sales success of the 1985-1989 Town Car that ensured the Town Car model would live on for few more decades through the end of the 2011 model year built on the same rear-wheel drive Panther platform.

Chrysler cancelled its last remaining full-size 4-door sedans at the end of the 1981 model year for all its car divisions. Chrysler’s rear-wheel drive mid-sized M-body platform easily took it’s place. Starting in 1984, Chrysler’s M-body platform luxury car was called the Fifth Avenue, for 1982 and 1983 it had been called the Chrysler New Yorker Fifth Avenue. The 1984-1989 Fifth Avenue was a big hit for Chrysler. Though it had an overall length of only 206.7 inches and was overall smaller than the competition’s full-size rear-wheel drive cars at the time, it had the traditional long hood and shorter trunk-area exterior styling that luxury car buyers wanted back in the 1980s.

The Fifth Avenue was the 1980s version of Chrysler’s current rear-wheel drive 300 model. It was the right size for the 1980s, had a large roomy interior, plenty of trunk space, and exterior that looked 100% upscale luxury car. Standard was a 130-140 horsepower 2-barrel carburetor equipped 5.2 liter V8 and there was for a few model years a 165-175 horsepower 4-barrel carburetor version of the 5.2 liter V8 available only in the California market. The 1984-1989 Fifth Avenue’s attractive exterior looks, ultra luxurious interior, and numerous luxury and convenience options made it one of the most popular luxury cars of the 1980s. It’s most distinctive feature was its unique vinyl roof which covered only the rear portion of the roof behind the rear side windows. Chrysler’s biggest mistake was not continuing to produce and modernize the rear-wheel drive M-platform Fifth-Avenue for the 1990s and beyond.

For 1977 Cadillac shrunk its top luxury model, the Fleetwood, down to more reasonable proportions, which was a big success. For 1980 Cadillac gave the full-size rear-wheel drive Fleetwood Brougham an exterior and interior design update. The end result was nothing short of a work of art that was a very elegant looking large car which was 221 inches long. The Fleetwood Brougham remained virtually unchanged during the entire 1980s decade. The reason was Cadillac instead focused its financial resources on its smaller in size all-new front-wheel drive Fleetwood which debuted for the 1985 model year. 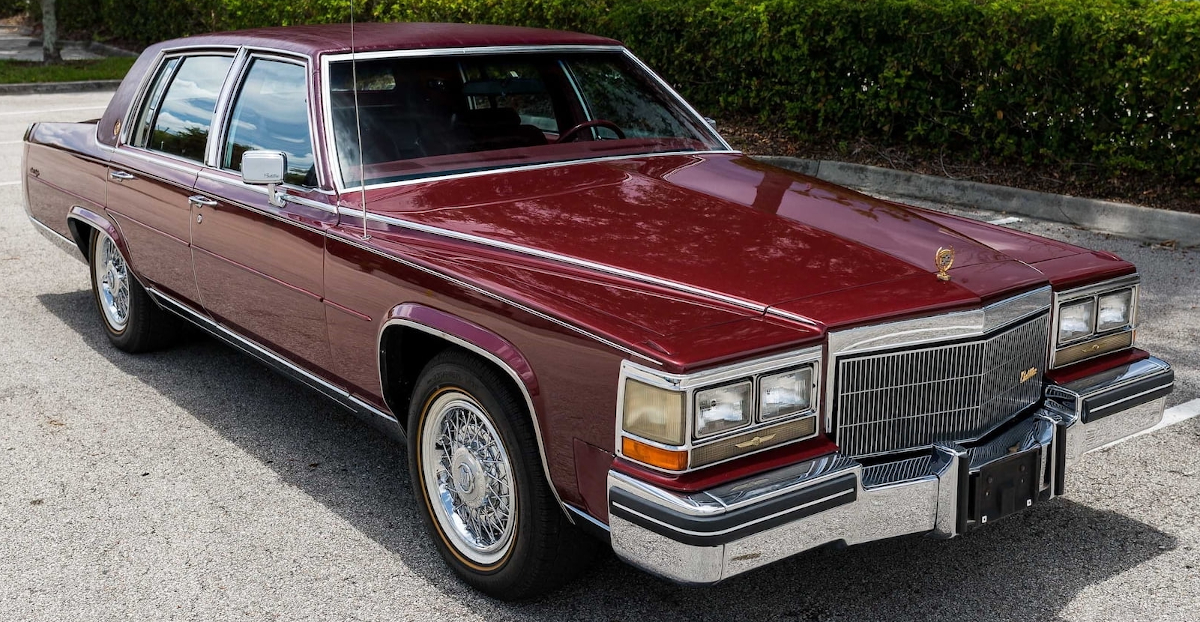 The Fleetwood Brougham had so many standard luxury features and a long list of luxury and convenience options. The Fleetwood Brougham was available in a 4-door sedan version during the entire 1980s decade and in a 2-door version during the 1980s decade from 1980-1985. The Fleetwood Brougham was powered by different V8 engines that ranged in displacement from 4.1 to 6.0 liters which even included a 5.7 liter diesel V8. For a short period of time even the following engines were available: a Buick sourced 4.1 liter V6 and Cadillac’s problematic 6.0 liter V-8-6-4 engine. The reason the 1980-1989 Fleetwood Brougham made this list was it offered a fantastic traditional luxury car ride, had great styling, a large roomy interior, large trunk capacity, lots of standard features, and plenty of luxury and convenience options.