5 1980s Cars That Should Have Never Been Cancelled 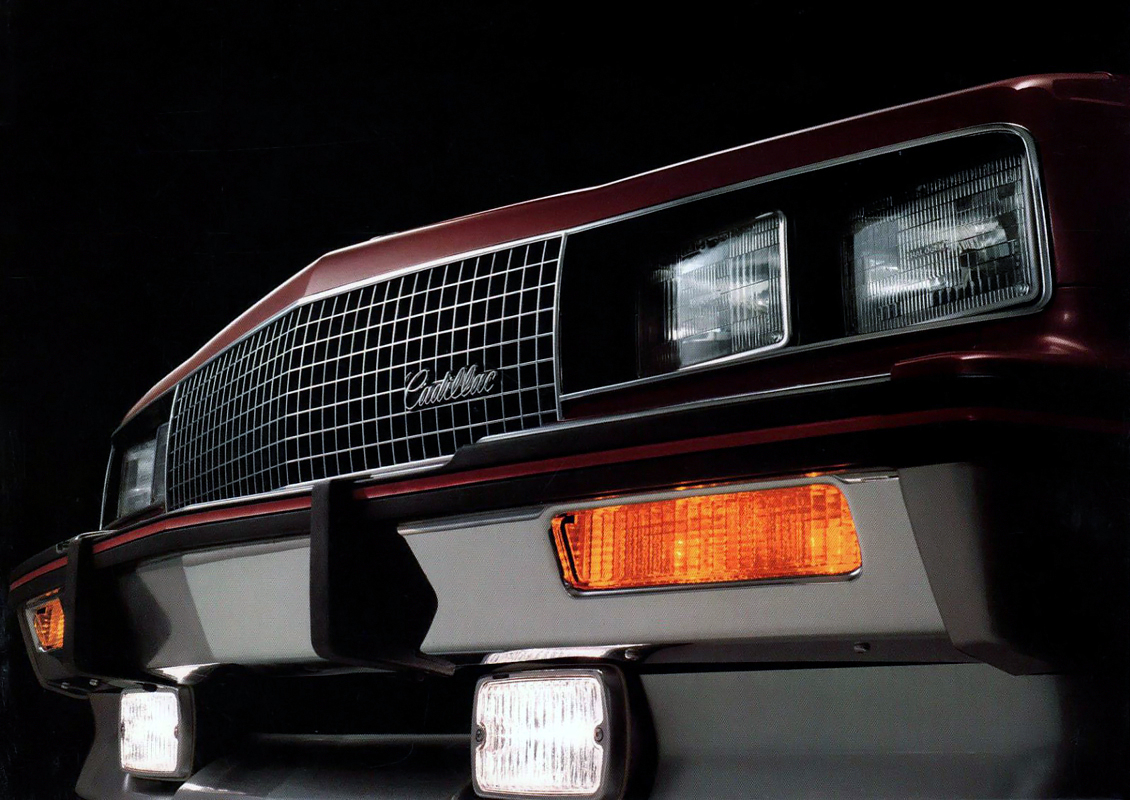 There was probably no decade in the U.S. in which cars underwent such a radical transformation than the 1980s decade. Most American cars during the 1980s shrunk in overall size, encountered massive engine displacement downsizing, and a transformation from rear-wheel drive to front-wheel drive. Also many good and popular car models went the way of the dinosaur during the 1980s. Here’s a list of five good 1980s cars that were cancelled that should have lived on into the 1990s and beyond.

The 1980-1988 AMC Eagle was a car ahead of its time. AMC had done a good job of hiding the age of the Eagle’s platform and styling which first appeared when the AMC Hornet debuted for the 1970 model year. The Eagle was generally fairly well equipped with options. Leather seats along with many power and convenience options were available. At the beginning of the Eagle’s run the Eagle was available in a sporty 2-door hatchback, 4-door sedan, and 4-door station wagon. Only the wagon survived until the end of Eagle production. Its very torquey 4.2 liter inline 6-cylinder engine was the same engine available in the Jeep CJ7 and early first generation Jeep Wrangler. For some model years a a 2.5 liter 4-cylinder engine was also available. 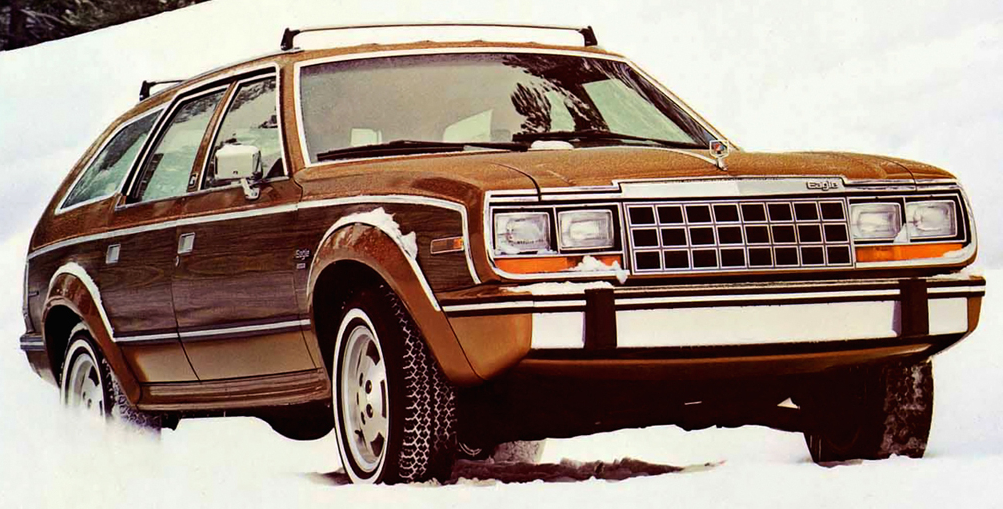 What made the Eagle a car of the future was its state-of-the-art four wheel drive system, the Select Drive system, which debuted in the middle of the 1981 model year. For the 1984 model year this system allowed the engagement and disengagement of 4-wheel drive while the Eagle was in motion. The Eagle had substantial elevated ground clearance for a car and had a good on road manners however it was just as capable off-road as most AMC produced 4-wheel drive Jeeps at the time. The Eagle deserved to live on into the 1990s decade, the Chrysler Corporation after purchasing AMC should have given the 4-wheel drive Eagle the platform and styling updates it deserved. Instead the Eagle became a very short lived new car brand. If the 4-wheel drive Eagle hadn’t been cancelled during the 1988 model year it would certainly still be around today in at least wagon form to compete with the very popular all-wheel drive Subaru Outback wagon.

When there was a resurgence of V8 powered rear wheel drive muscle cars during the 1980s, Buick went a different direction. It produced the 1984-1987 Buick Grand National which was a modern 2-door muscle car powered by Buick’s Turbo 3.8 liter SFI V6. It was available only in a black exterior color and it was one of the coolest looking cars on America’s streets during the 1980s. The first Grand National was the 1982 Buick Grand National which had a two-two gray and silver exterior color, however it was just an appearance package. Out of the only 215 produced for 1982 very few were equipped with Buick’s Turbo 3.8 liter V6. It was Buick’s return of the Grand National for 1984 in it’s new all black exterior paint scheme and equipped with every performance part Buick could muster, that created the legendary Grand National that was the best muscle car of the 1980s.

Back in the late-1970s and early-1980s Cadillac had done everything right researching and identifying what would be become one of the future’s largest growing market segment in luxury vehicles, compact luxury cars. Why are compact luxury cars so important? First, they can be more easily sold in much higher volume than more expensive luxury cars. Second they bring into a car brand a new pool of young buyers who will buy more expensive models of that luxury car brand in the future as their income and financial well-being increases. This is where the front-wheel drive 4-door 1982-1988 Cadillac Cimarron came into the picture. It was supposed to offer Cadillac luxury, technology, and quality to younger buyers.

On the surface it was a brilliant plan. After-all Cadillac had done the same before with the successful release of the smaller rear-wheel drive 1976 Cadillac Seville which was partial based on the budget oriented Chevrolet Nova’s X-platform. But the Cimarron was a disaster where the 1976 Seville didn’t look like a 1976 Nova, the 1982 Cimarron looked like a rebadged 1982 Chevrolet Cavalier – both shared the same GM J-body platform and many common parts. Cadillac unfortunately hadn’t spent the time giving the Cimarron its own distinctive exterior styling to go with its leather interior. By 1985 a 130 horsepower 2.8 liter V6 was now optional giving the Cimarron the infusion of power it needed. The underpowered 4-cylinder engine would be gone by 1987. When equipped with a 5-speed manual transmission the 2.8 liter V6 Cimarron provided a European touring car like driving experience with very good handling and acceleration. By 1987, Cimarron exterior styling looked more Cadillac than Chevrolet. When Cadillac finally evolved the Cimarron into the car it should have been back in 1982, GM cancelled its productin at the end of the 1988 model year. Had the Cimarron been given a second generation which would have included sleeker more unique exterior styling and an infusion of more power that would have caused Cadillac to attract many new young car buyers during the 1990s and beyond. Thus making Cadillac a much more popular car brand today than it currently is.

Mitsubishi was late entering into the U.S. car market compared to Honda, Toyota, and Datsun. However its market share in the U.S. expanded quickly during the 1980s because of its business association with the Chrysler Corporation which first allowed Mitsubishi to enter into the U.S. market in the 1970s by producing Dodge and Plymouth models that were rebadged versions of its cars. It continued to produce cars for the different Chrysler Corporation brands during the 1980s and 1990s. It also began selling its cars and trucks under the Mitsubishi brand name starting in the early-1980s. At this time it debuted the rear-wheel Starion for the 1983 model year to compete in the American 2+2 sports coupe market. The Starion had a 145 horsepower turbo 2.6 liter 4-cylinder engine that gave it great performance for its day.

However it was the 1986-1989 Starion ESI-R which was the wide body version of the Starion which gave the Starion true performance car credentials. It had the intercooler version of the Turbo 2.6 liter 4 which had 176 or 188 horsepower depending on model year. The Starion ESI-R was fun to drive, had great handling, and was a fast car that bested many performance cars of its era. Not to mention it was one of the best looking performance cars of its era, it looked like a sleeker and more muscular version of the Porsche 944. Mitsubishi also offered different versions of its Starion under the Conquest model name which was sold during different model years in the 1980s under the Dodge, Plymouth, and Chrysler brand names. The Starion was replaced by the front-wheel drive and all-wheel drive Mitsubishi Eclipse and the front-wheel drive and all-wheel drive Mitsubishi 3000GT. These cars would be successful but they didn’t have the character or the looks of the rear-wheel drive Starion ESI-R.

Just like the Cimarron mentioned earlier, the Pontiac Fiero was cancelled before it could become the car it was destined to be. When the Fiero was first released for the 1984 model year, it was America’s first mid-engine sports car. However to get the Fiero approved for production by GM management, Pontiac was forced to cut corners for budgetary reasons. This meant the first year 1984 Fiero was not the well-rounded sports car Pontiac wanted to build. The 1984 was a 2-seater sports car that handled well and looked like a European mid-engine sports car but was only equipped with an underpowered 92 horsepower 2.5 liter 4-cylinder engine and its steering feel was not very precise. For 1985 a 140 horsepower 2.8 liter V6 with multi-port fuel injection was now optional, giving the Fiero the power boost it needed.

Gradually year-by-year Pontiac improved the Fiero and by 1988, the GT and Formula models had power output, handling, steering feel, and braking that were all very good. Unfortunately sales by 1988 had really declined from the 136,840 Fieros produced for 1984 and GM cancelled the Fiero in the middle of the 1988 model year. Why the Fiero deserved to live on, was a new sleeker 2nd generation Fiero that would have weighed no more than 3,000 lbs was scheduled to be released for the 1989 or 1990 model year with an available 3.4 liter DOHC V6 which would have produced anywhere from 200 to 220 horsepower. This lightweight high performance Fiero would have given Pontiac a reasonably priced genuine high-performance 2-seat mid-engine sports car that at the time would have competed with the much more expensive 2-seat sports cars from Europe. 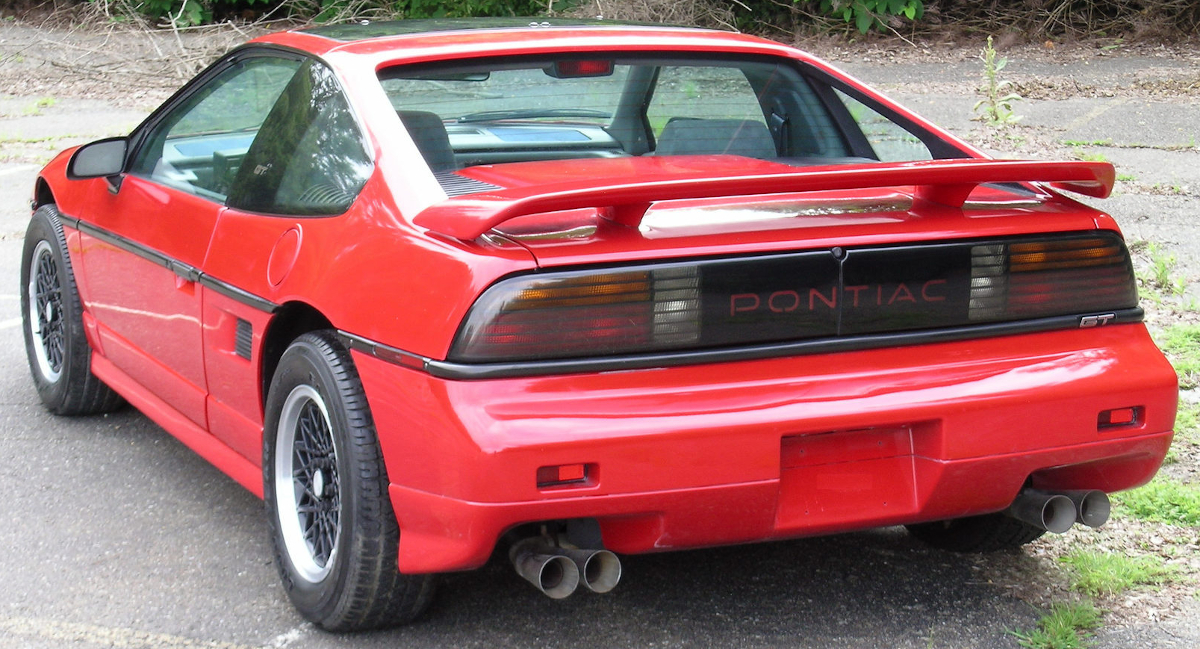