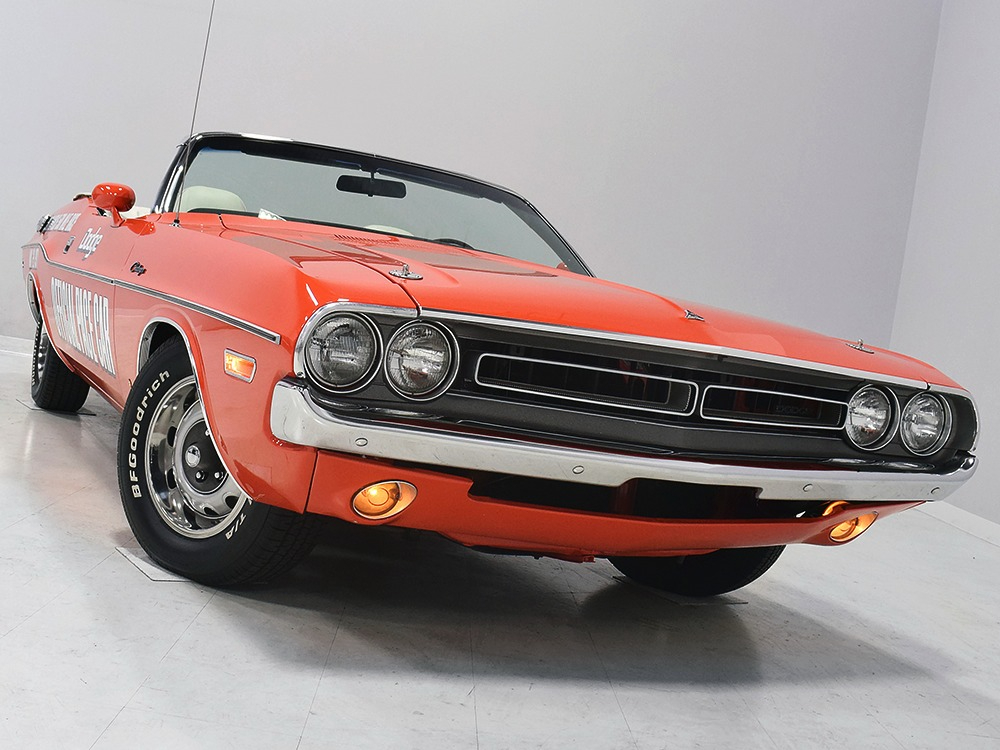 By the 1970s, most automobile manufacturers began marketing their cars that were used as professional race pace cars in order to boost car sales. This usually entailed these automobile manufacturers offering through their dealership networks in limited production numbers special pace car editions which were exact copies of their genuine race pace cars. These pace cars generally were more decorative and colorful than the standard production versions of the same car models. Pace cars also needed to have a powerful engines to be able to accelerate very quickly and easily reach speeds of over 100 miles per hour. Though there were a lot of legendary pace cars during the 1970s, here’s a list of the 3 best pace cars from 1970 to 1975.

1971 was the peak of the original muscle car era and the Dodge Challenger was the quintessential muscle car of 1971. The 1971 Indianapolis 500 race (or Indy 500 for short) selected the 1971 Dodge Challenger as its official pace car. For this race Dodge offered a very memorable and striking beautiful 1971 Challenger convertible that had a Hemi Orange exterior with a white interior and a white convertible soft-top. The Chrysler Corporation didn’t have any involvement in the creation of or development of this pace car, it was the Central Indiana Dodge dealers that created the 50 pace cars that were showcased at the 1971 Indy race.

Over the years Oldsmobile had been one of the more popular automobile brands to pace the Indy 500 race. So it was no surprise when an Oldsmobile was selected to pace the 1972 Indy 500 race. However for 1972 it was different because the limited production Hurst/Olds was selected. The Hurst/Olds was the byproduct of a special collaboration between the Hurst Performance company and Oldsmobile to build a special limited edition muscle car. The 1972 Hurst/Olds was based on the 1972 Oldsmobile Cutlass and was the third in a series with the 1968 being the first Hurst/Olds. There were a total of 635 Hurst/Olds produced for 1972, 130 were convertibles, 499 were hardtops, and 6 were station wagons which were used as special use vehicles for the race. It was the perfect muscle car of its era and the perfect pace car for the 1972 Indy 500 race.

All U.S. market cars starting in 1972 were no longer rated in gross-horsepower ratings but the new more stringent net horsepower ratings, this gave all 1972 model year cars lower horsepower ratings than 1971 and earlier. The 1972 Hurst Olds still had plenty of power under the hood with a standard 270 horsepower 455 cubic-inch big-block V8 or the optional 300 horsepower 455 cubic-inch big-block V8. All 1972 Hurst/Olds had exteriors that were painted white and had gold decals, gold rally wheels, the W25 Ram Air hood induction system, a black interior with front bucket seats, a center console with a Hurst Dual-Gate shifter, and a 3-speed automatic transmission. The exception was some or all of the station wagons had tan colored interiors.

Most cars chosen for Indy Pace car duties are performance oriented. For 1973 that wasn’t the case. The ultimate American luxury car at the time, the 1973 Cadillac Eldorado convertible was chosen. Not only was it luxurious but it was a very attractive large car which had a suspension that provided a very comfortable luxury car ride. The 1973 Eldorado convertible had a 235 horsepower and 400 lb-ft of torque 500 cubic-inch V8. The very heavy 1973 Eldorado which had a curb weight of 5,094 lbs didn’t accelerate as quickly as the performance cars of its era. It took what seemed like an eternity to reach 100 mph, so Cadillac added performance modifications and other changes to the two Eldorado convertibles designated for race track pace car duties which gave them rapid acceleration to well-over 100 mph and much better cornering ability on the high bank turns at the Indy track.

Cadillac produced a total of 566 Eldorado convertible Pace Car Editions which it called Pace Car Replicas, 51 were used as promotional cars at the race. All replicas and the two official pace cars had a white exterior with red pin-striping, a white convertible soft-top, and a red leather interior. And like most pace car editions of the 1970s it was the owner’s decision whether or not the dealer installed the official pace car decals on the exterior.