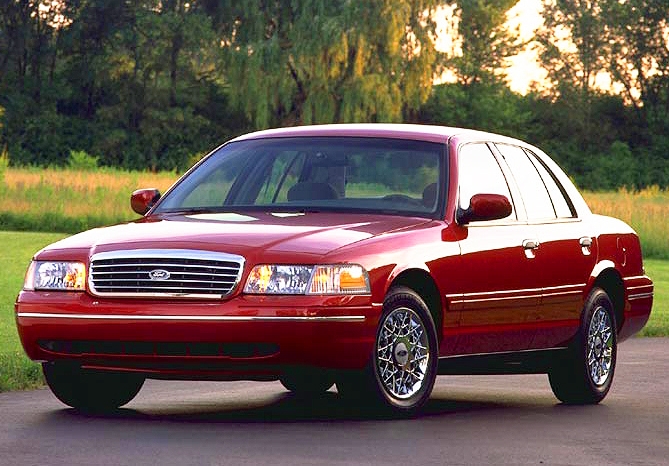 There are very few cars that have such a loyal following that they can continue to be produced for many years and even decades with very few changes and still encounter strong sales. One of these cars is the full-size rear-wheel drive 1992-2011 Ford Crown Victoria. For 20 model years the big aerodynamic Crown Victoria or Crown Vic for short, had the same basic body shape with only very mild exterior and interior updates. In an era where the traditional big American car was a dinosaur, Ford still managed to sell 1.6 million Crown Vics during these 20 model years. The formula was real simple, the Crown Vic was a large 4-door sedan, no station wagon or 2-door models were available.

The 1992 Crown Vic was the result of a radical exterior and interior design of Ford’s full-size car which used the full-size Ford Panther platform – a body on frame design. The Panther platform was first introduced for the 1979 model year. Ford’s full-size Panther car back then was called “LTD” which a few years later changed to “LTD Crown Victoria” and in 1992 became just “Crown Victoria”. Back in 1979 the full-size Ford’s body panels were boxy and remained so through the 1991 model year. The sleek streamlined aerodynamic styling introduced with the Crown Vic for 1992 mimicked the aerodynamic styling of Ford’s very popular 1992-1995 Taurus. The styling was a big hit with Crown Vic buyers and kept Crown Vic sales humming until the end of the 2011 model year when the Panther platform was discontinued. In other words the Ford Panther Platform lasted from the era of Disco until the era of the iPhone. The truth of the matter is that Ford could have kept producing the 2011 Crown Vic and the Panther Platform it resided without any changes and it would still have profitable sales volume today 8 model years later. In fact there are still Police departments and taxi cab companies currently using them day-to-day and refusing to retire them.

There were two iterations of the Crown Vic, first was the 1992-1997 which had the 1992-1995 Taurus type short height but long horizontal headlights and conservative short height wrap around rear taillights. The 1992 Crown Vic also had no front grille which was the popular styling trend at the time at Ford which preferred space-age streamline very aerodynamic styling, in the center part of the front-end where the front grille should have been there was just an oval hole with a blue oval Ford badge in the center. The 1993-1997 Crown Vic had the same headlights but a tiny front grille with the Ford Blue oval badge in the middle. The second iteration was the 1998-2011 which consisted of taller and larger front head lights that weren’t as long horizontally as the previous iteration, a large conservative front grille, and taller and more rounded taillights. The roofline was also slightly revised. These styling touches were a nice evolution and gave the exterior a more upscale look. The 1998-2011 has become the more popular styling among the two iterations. There were slight front grille design changes for some of the model years during this time period.

This all sounds nice but what’s the real appeal of the 1998-2011 Crown Vic? Why are people scouring used car lots to try to find them? The simple answer is function. The Crown Vic is attractive but most buy it for the great function it provides. Its reliable with a driveline configuration that can take punishment 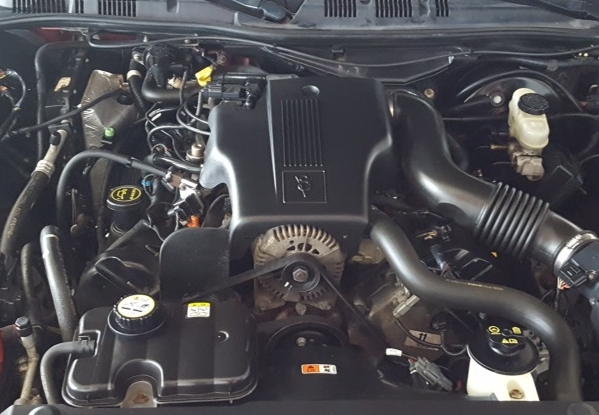 and easily last at least 200,000+ miles. From the solid rear axle to the ultra reliable 4.6 liter SOHC V8 and 4-speed automatic transmission, the Crown Vic will last longer than most front-wheel drive cars of the same vintage. The sturdy body-on-frame structure is Sherman tank strong. Its size is ultra big in today’s car market with a 212-inch length, 77.3-inch width, and 114.7-inch wheelbase. Today large cars, even very expensive ones, don’t usually surpass the 200-inch length mark. Ironically back in 1976 the Crown Vic’s portions would have been considered to be that of a mid-size car. For instance the mid-size 4-door 1976 Ford Gran Torino was slightly bigger than the Crown Vic with a length of 218.1 inches, a width of 79.3 inches, and a wheelbase of 118 inches. Worth noting from 2002-2011 a long-wheelbase version of the Crown Vic which gave rear seat passengers more legroom was available. Even with the standard wheelbase the interior cabin was massive. Plenty of room for 6 full-size adults and a massive trunk. There were some Crown Vics which came equipped with center consoles or just bucket seats with no console, these cars had seating for 5 adults. Headroom and leg-room were limousine proportions. The ride quality of the Crown Vic was top notch, it had a smooth comfortable ride and surprisingly for a big comfy car it didn’t feel too out of place on a curvy road, this was especially true with the the ones optioned with the Interceptor package which was used for Police duties and had a better handling suspension. The SOHC 4.6 liter V8 found in all Crown Vics may have varied in horsepower but it provided responsive acceleration and fantastic low end torque. Highway gas mileage was around 25 MPG which at the time was very good for a V8 that was propelling a 4,100-lb large car.

Ironically Ford for the 1998-2011 model years, really didn’t promote the Crown Vic, in fact halfway through its run it was trying all it could do to retire it. For 2005, Ford promoted its new Five Hundred a Volvo derived full-size front-wheel car which had a length of 200.7 inches while trying to snuff out the Crown Vic. The plan didn’t work, the Five Hundred was soon renamed the Ford Taurus and Crown Vic sales still remained strong. Ford then went the next step and for the 2008-2011 model years only offered the Crown Vic for fleet sales and not to the general public. Buyers who wanted a genuine full-size rear-wheel drive Ford product had to buy a Mercury Grand Marquis or Lincoln Town Car for 2008-2011.

We all want to travel like royalty where we are comfortable and not packed in a car’s cabin like sardines or have to climb into a high SUV to get this type of roominess. When one could still buy a brand-new Crown Vic, the average person had the opportunity to travel like a royalty for a very reasonable price. Unfortunately now, we have to visit used car lots and look through the online classifieds to find one. It’s worth the trouble because when found a good conditioned 1998-2011 Crown Vic will have you riding in styling for many years, not to mention you’ll own a great American full-size car that American automakers will never again have the guts to produce.