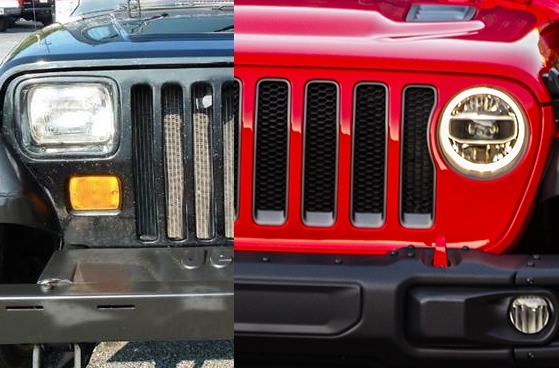 The Jeep Wrangler which has been around for a little over 3 decades, first made its appearance as a 1987 model offering in 1986. It was a smash success. This first generation Wrangler would soldier on with minimal updates through the 1995 model year. What made this Wrangler so unique was it had square headlights, all the previous Jeep CJ models and every Wrangler after it had round headlights. The first generation was the YJ platform Wrangler. The second generation Wrangler, the TJ platform Wrangler was introduced in 1996 as a 1997 model year offering. It too was a big success taking the Wrangler to the next level of an ultimate off-road vehicle, it lasted through the 2006 model year. It would be replaced by the JK platform Wrangler in 2007 which would take the Wrangler from a popular niche vehicle to a desirable high-volume SUV which was more capable off-road than ever. JK Wrangler production is scheduled to end on April 7, 2018. Its replacement the highly praised JL platform Wrangler began rolling into Jeep dealerships in January 2018.

There’s no current Jeep model that has a bigger job than the JL Wrangler, since it has to remain true to its roots by being the most capable off-road SUV on the market. A large corps of Jeep Wrangler buyers demand nothing less than this. This tradition dates back to the original World War II 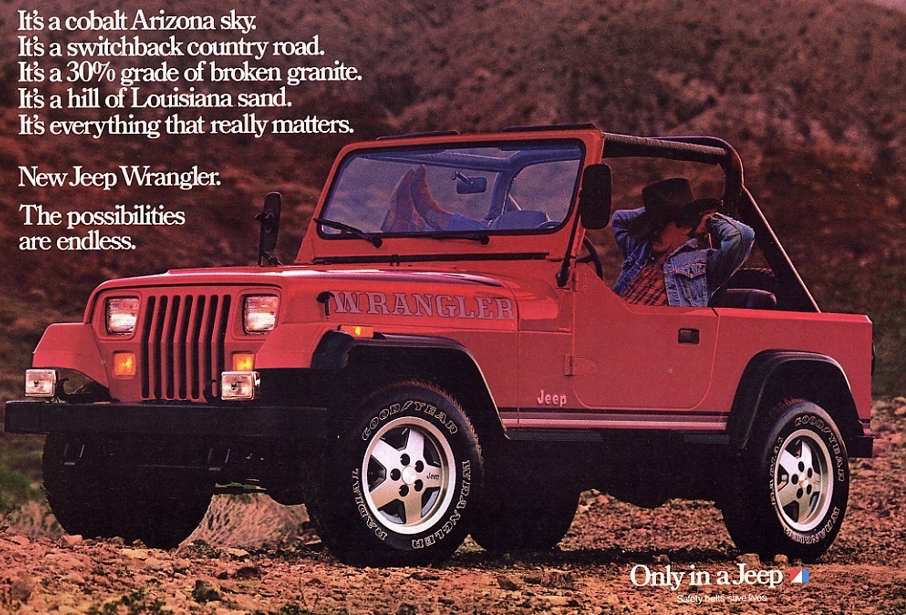 Willys Jeep. And the JL not only delivers but surpasses most of these fans expectations. The tight rope Jeep must walk with the JL Wrangler is that along with being the ultimate off-road warrior, the YJ must offer all the convenience and luxury options that SUV buyers now demand and have very civilized on-road manners. It’s almost the impossible, but Jeep has indeed done the impossible with the release of the new JL Wrangler which now comes the closest it ever has to providing all things to all people.

A quick rewind back in time, the 1987 YJ was only available in a 2-door model and it was standard with a removable soft top and removable half side doors which had side zipper plastic windows attached to the top of the doors. The 1987 YJ could be equipped with a removable hardtop which required removable full steel doors that had roll up glass windows. There were three Wrangler models back then, the standard Wrangler the more upscale Wrangler Sport (which had the Sport decor package) and the top-of-the-line Laredo which had a chrome front grille, chrome bumpers, and chrome towing hooks.

The 2018 JL Wrangler is available in a 2-door version known as just the Wrangler and a 4-door version known as the Wrangler Unlimited. It has been this way since the introduction of the 2007 JK Wrangler. All 2018 JL Wranglers will have removable steel full doors. Removable half doors will be a factory option for the JL Wrangler, starting with the 2019 model year. The 2018 JL Wrangler is available with a removable soft-top or a removable hardtop. If you can’t decide which one you want, you can get the dual top group option which gives you both. There is also a power retractable top option. The 2018 JL has three main models – the Sport (which available in either standard Sport trim or more upscale Sport S trim), Sahara, and Rubicon. 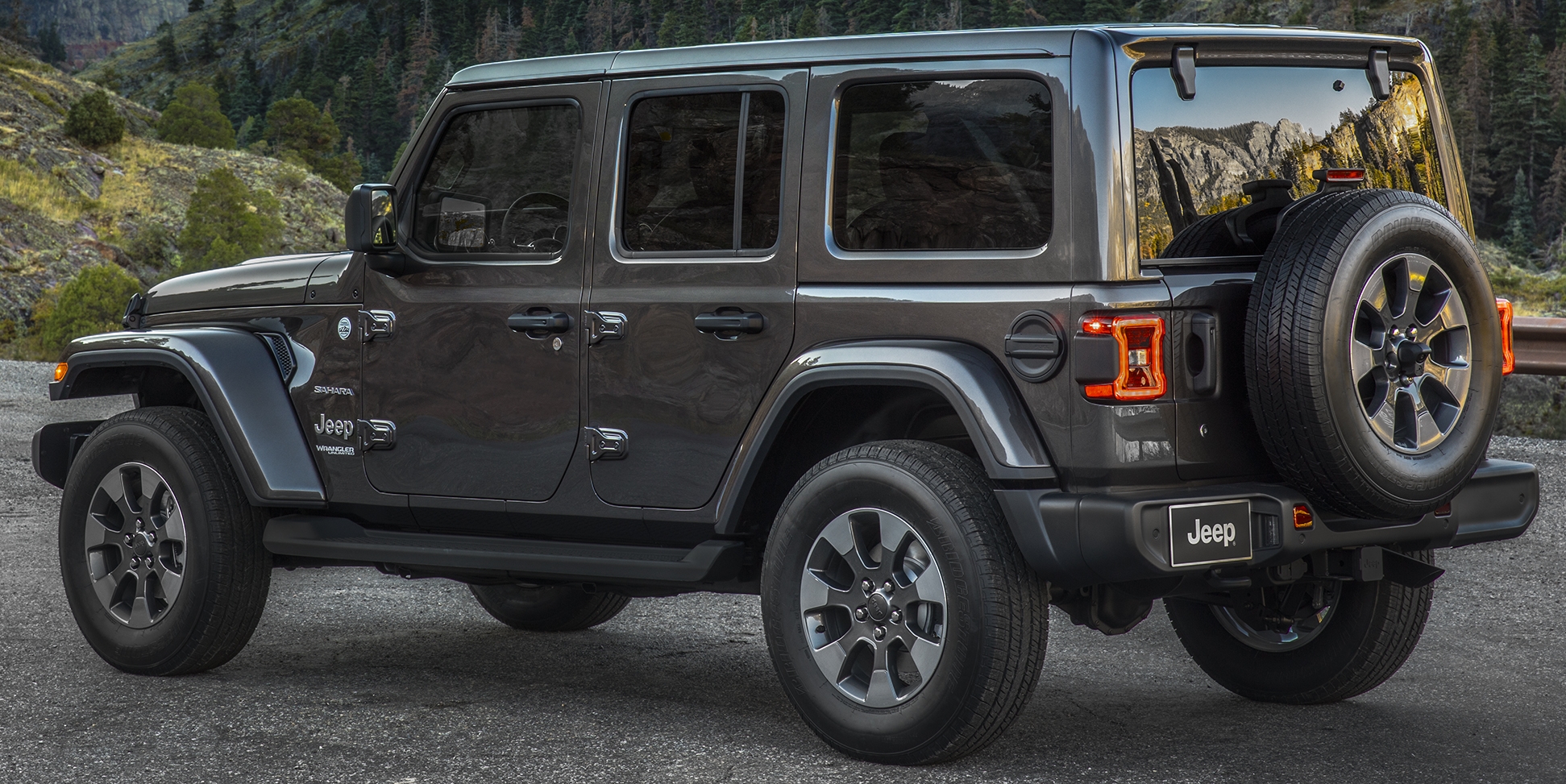 Even though there’s a massive age gap between the 1987 YJ and the 2018 JL, in terms of general body design they are almost brothers. Just like previous CJ models, both have boxy styling that dates back to the World War II Willys Jeep. It’s this boxy shape that is so much different than the other excessively streamlined SUVs currently on the market. Where the 2018 JL really shines is that it retains a boxy shape while having superior aerodynamics when compared to its predecessors. Only upon close inspection can one see the all the slight exterior aerodynamic body curves that Jeep has given to the JL to provide its boxy shape the best possible aerodynamics. 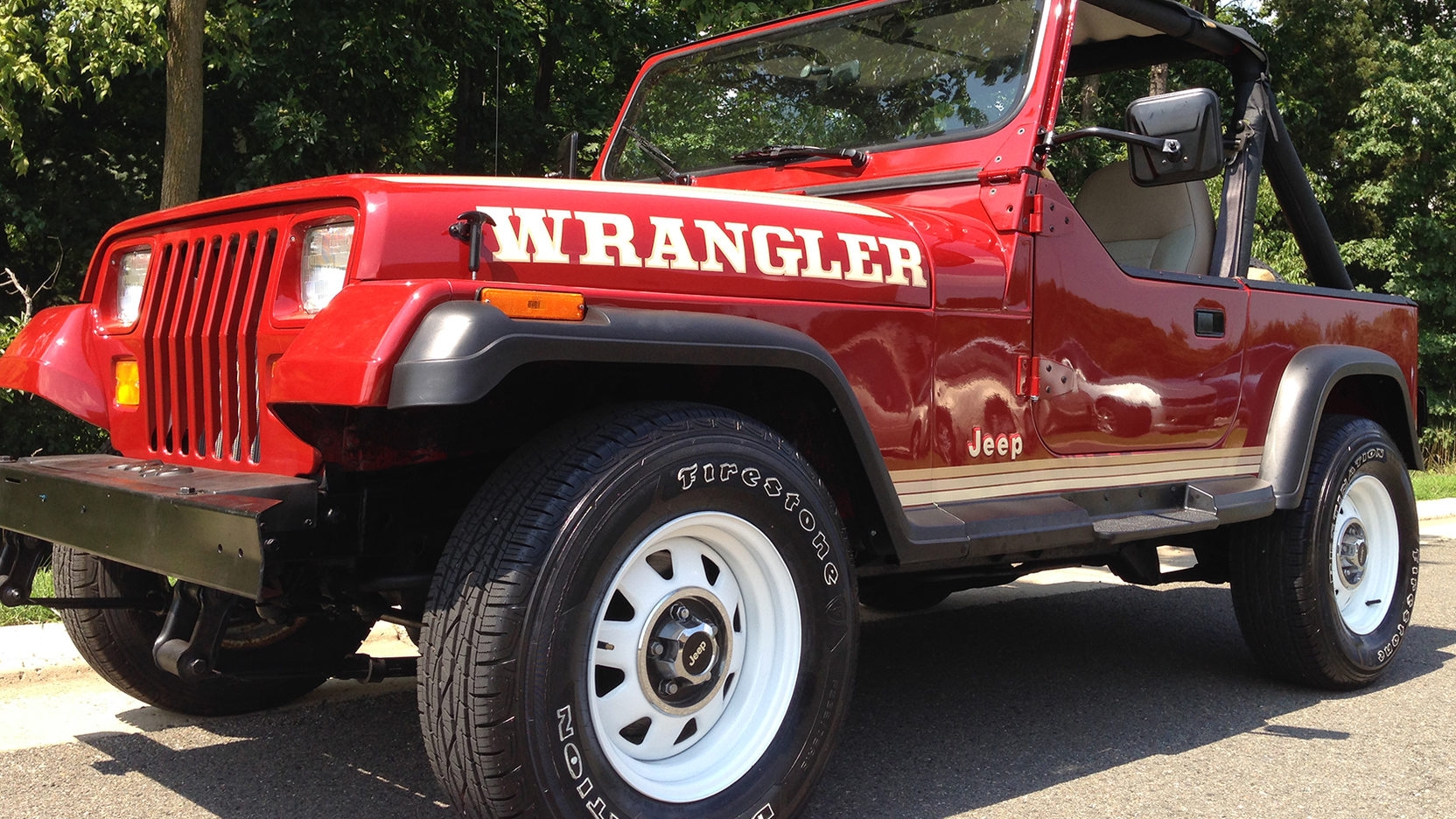 When the 1987 YJ Wrangler first arrived on the scene, it’s interior and especially its attractive dash design was a massive leap forward from the CJ7 it replaced. The YJ Wrangler was devoid of many of the options available in most cars at the time. The 2018 JL is the exact polar opposite, even a stripped down 2018 JL Wrangler Sport is luxurious by comparison to a loaded 1987 YJ. A loaded with options 2018 JL Wrangler Sahara or Rubicon has enough luxury and convenience options to keep even pickiest of luxury car buyers happy. 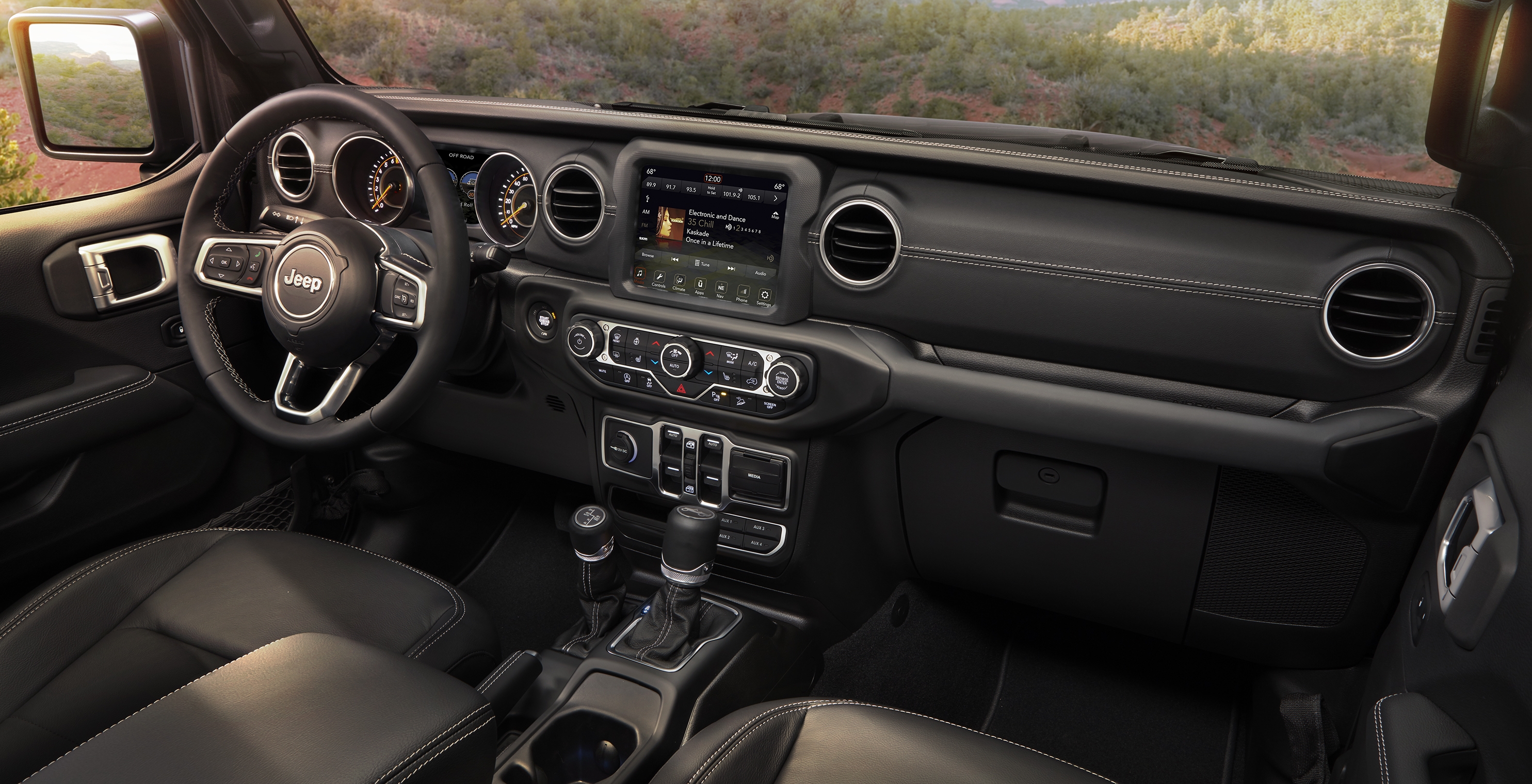 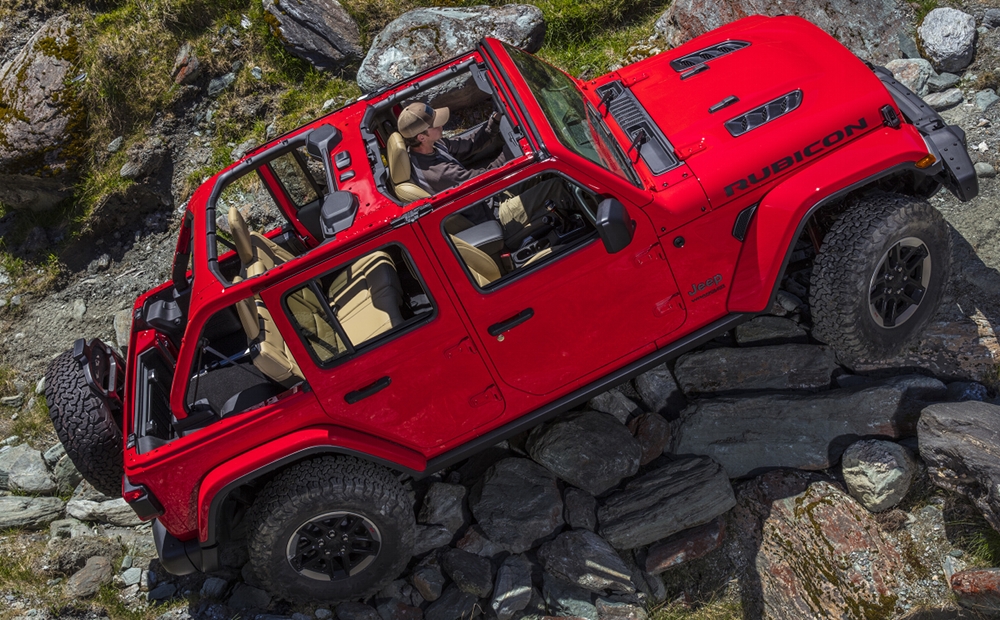 The 2018 JL Wrangler Sport and Sahara are standard with the part-time Command-Trac 4-wheel drive system. For the Sahara the full-time Select-Trac system is optional, this is the first time a full-time 4-wheel drive system has been available with a Wrangler. The Rubicon is mandatory with the heavy-duty Rock-Trac 4-wheel drive system. Another area where the Wrangler has improved over the years has been tire size, the 1987 YJ’s biggest available tire package consisted of P215-75R15 Goodyear Wrangler tires, while the 2018 JL’s biggest available tire package consists of massive 33-inch BF Goodrich All Terrain KO2 tires. 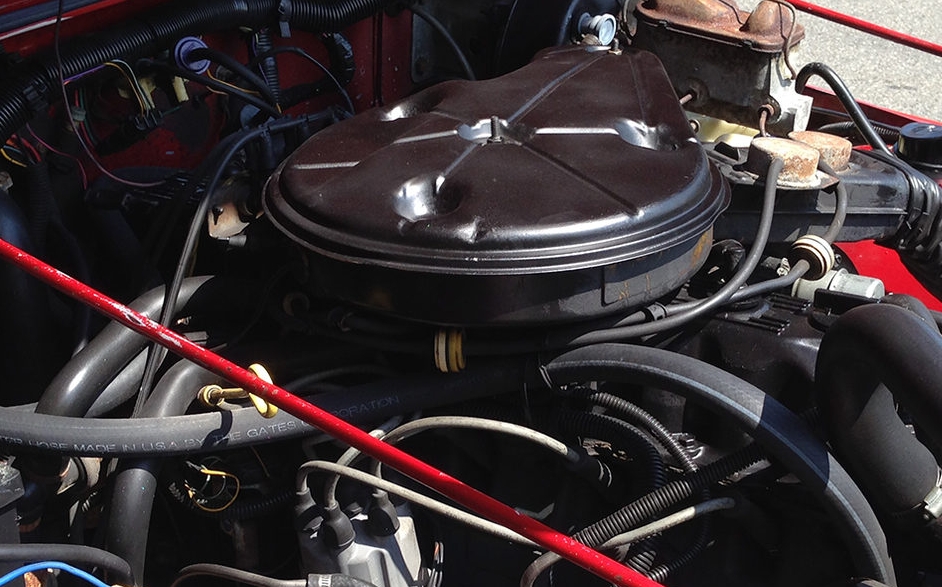 The 1987 YJ Wrangler was standard with a fuel-injected 2.5 liter 4-cylinder engine that produced 117 horsepower and 135 lb-ft of torque. A floor mounted 5-speed manual transmission was mandatory. Optional was the 112 horsepower 2-barrel carburetor equipped 4.2 liter straight-six which produced 210 lb-ft of torque at a very low 2,000 rpm. The 4.2 liter was light on horsepower but its good low-end torque at an extremely low rpm figure, made it a great engine for off-roading and for driving around town. A floor mounted 5-speed manual transmission was standard with the 4.2 liter, while a 3-speed automatic with the shifter on the column was optional.

The 2018 JL is standard with the 285 horsepower and 260 lb-ft of torque fuel-injected DOHC 3.6 liter V6 which has been with the Wrangler since 2012 with the same horsepower and torque ratings even though this engine has a few very minor updates for 2018. With this engine a 6-speed manual transmission is standard with an 8-speed automatic transmission being optional. In January 2018, the online version of Motor Trend magazine tested a 2018 JL Wrangler Unlimited Sahara with the 8-speed automatic and 3.6 liter V6 and obtained 0-60 mph in 6.9 seconds and the quarter mile in 15.3 seconds at 89.9 mph. As a comparison it took almost double the time for a 3-speed automatic and 4.2 liter straight-six equipped 1987 YJ to run 0-60 mph, 13.9 seconds to be exact. The 2018 JL has an optional 268 horsepower and 295 lb-ft of torque turbocharged 2.0 liter 4-cylinder engine with a mandatory electronic assist motor. The much anticipated turbocharged 3.0 liter V6 diesel engine won’t be on the JL Wrangler option list until the 2019 model year.

The 1987 YJ and 2018 JL are brothers in arms, they are both game changers. The 1987 YJ was so civilized when compared to the CJ7, that it’s “YJ” moniker took on the nickname of “Yuppie Jeep”, but it also was more capable off-road than any previous Jeep model before it. The same can be said of the 2018 JL, it is more civilized than any previous Wrangler and more capable off-road than any previous Jeep model. The more things change the more they stay the same with the Wrangler, which means Jeep gets an A+ for the new 2018 JL Wrangler. The only problem Jeep will have, is providing enough supply of JL Wranglers to fulfill the massive demand from the many current loyal Jeep customers and new customers who are going to want to buy one – for Jeep, that’s great news. On the flip side of the coin, for those who can’t afford a new Wrangler or just want a vintage Wrangler and don’t mind the lack of modern convenience options or the tougher ride, you can’t go wrong buying a 1987 YJ Wrangler.