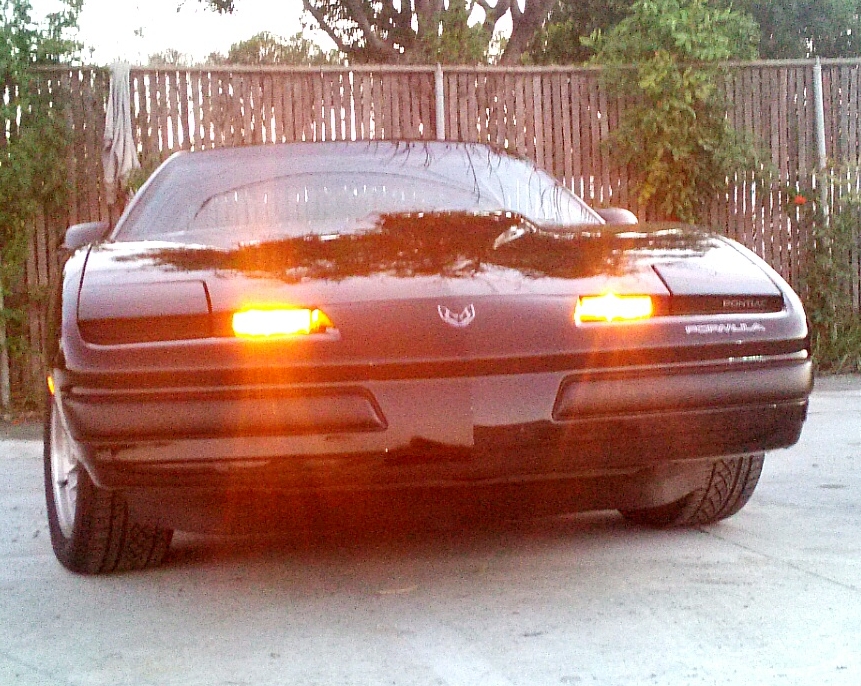 When the 1980s decade began, performance was at a low point in the U.S. car market. If a car could obtain below 10 seconds from 0-60 mph, the car was considered a genuine performance car. Very few cars during the early-1980s could perform this feat. Fortunately performance by the mid-1980s had made a comeback with some cars obtaining 0-60 mph in the 7-second range and even a few in the 6-second range and a rare few were just slightly faster. A majority of these cars were expensive especially the exotic sports cars from Europe and out of reach of the average American buyer. Even the rear-wheel drive V8 powered American performance cars by the mid-1980s were getting a little pricey. The exception was for 1985, Ford offered the 1985 Mustang GT’s 210 horsepower 5.0 liter (302 cubic-inch) H.O. V8 in its budget Mustang – the LX. This wasn’t the first time the Mustang GT’s 5.0 liter H.O. V8 was available in the LX. It had a base sticker price of only $9,885. It was a big hit with the performance car buyer who had very limited funds. However the 5.0 liter H.O. powered Mustang LX didn’t have the flash and sportiness of the more expensive 1985 Mustang GT.

Over at Pontiac at this time, Trans Am and Pontiac sales were very good, however the Trans Am was moving up the price scale and the Trans Am’s top performance motor was not available in the less expensive Firebird. This had been the case since 1982. Pontiac realized the problem and relaunched the Firebird Formula for 1987, the Formula had been a series performance oriented Firebird model in the 1970-1981 Firebird lineup. So it was no surprise that the 1981 Firebird Formula was the last Firebird to be available with the Trans Am’s top-of-the-line engine. With the return of the Formula for 1987, Pontiac now had a genuine performance car with a base price of only $10,759 which was extremely close to the 1987 5.0 liter Mustang LX’s base price of $10,575, add to that the Formula was also a great looking performance car. It was thousands of dollars less than than the 1987 Trans Am which had a base price of $13,259. 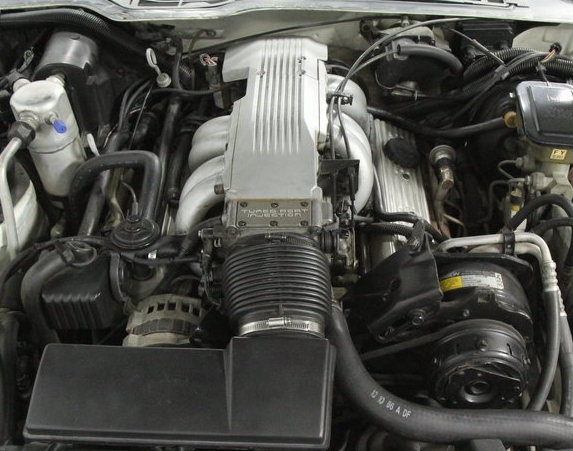 From 1987-1992 Pontiac offered a top-of-the-line Trans Am model which was the Trans Am GTA, the GTA package was standard with the 5.7 liter TPI V8, the WS6 suspension package, and many other goodies. The downside was it was very pricey, for instance a 1987
Trans Am GTA started out at a little over $16,000 with extra options it easily hit the $20,000. The Trans Am GTA was marketed as an upscale performance car, it was Pontiac’s version of the Corvette. Now this is where the Formula comes into the picture, it could be 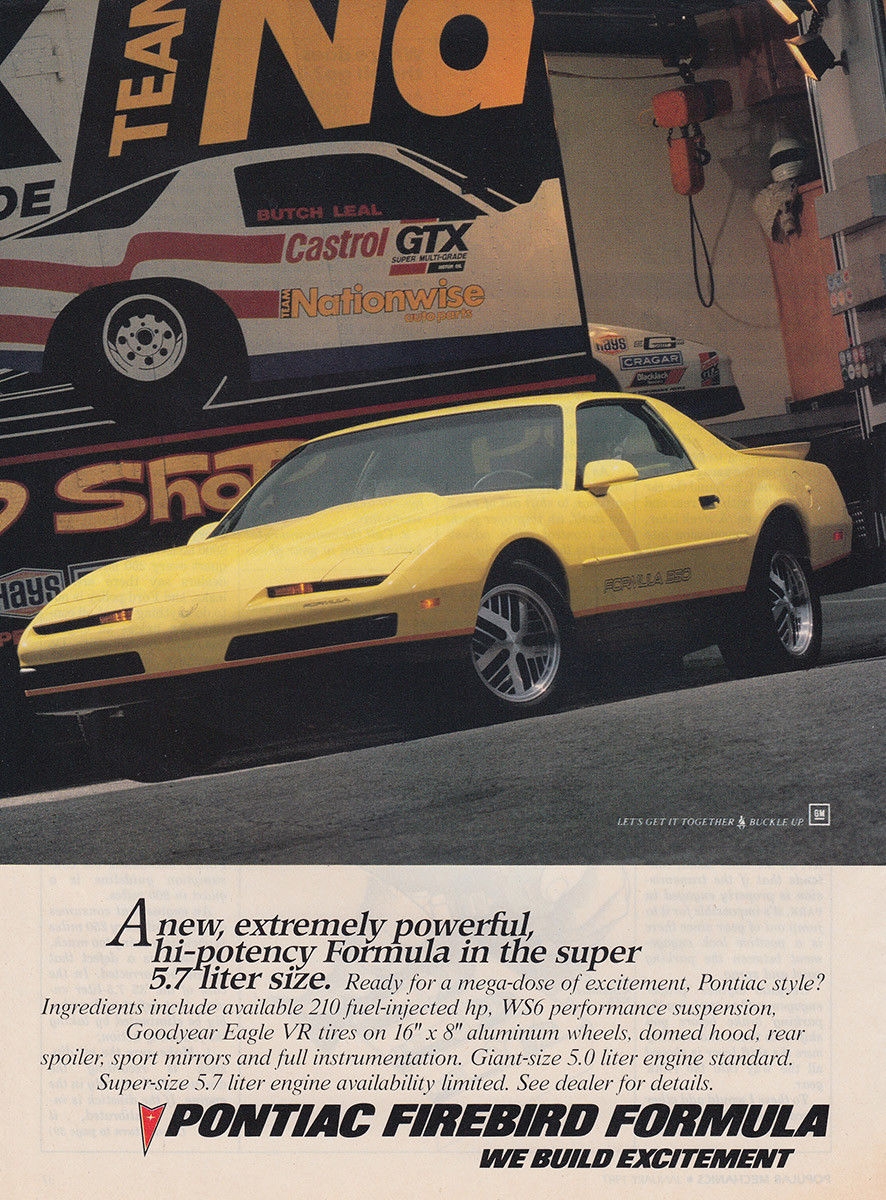 equipped with the same 5.7 liter TPI V8 and WS6 handling package and the sticker price was still under $12,000. In other words the world class handling and performance of the Trans Am GTA was available on the Formula for several thousand dollars less than the GTA. But that wasn’t the best part, the Formula was few hundred pounds lighter than the heavier GTA. It was also lighter than the 1987-1992 Trans Am, 1987-1990 Camaro Iroc-Z, and 1991-1992 Camaro Z28 which were all available with the 5.7 liter TPI V8. So during this time the Firebird Formula was the true 5.0 liter Mustang LX and Mustang GT competitor. The Firebird Formula with the 5.7 liter TPI V8 could go toe-to-toe with the lighter in weight 5.0 liter LX and GT. For instance the 1987-1992 Formula with the 5.7 TPI V8 could hit the quarter mile on the average in high-14 second range and in some cases the mid-14 second range. And if a buyer wanted a manual transmission equipped Formula, back in the day Road & Track magazine tested a 5-speed manual 5.0 liter TPI equipped 1987 Formula and a obtained a very impressive 0-60 mph in 6.3 seconds and the quarter mile in 14.9 seconds. These 5.0 liter TPI and 5.7 liter TPI Formula performance times were on par with the performance times of the 5.0 liter Mustang LX and GT at the time. The 5.0 liter LX may have been slightly cheaper but it looked all budget, both inside and out, it was the plain Jane taxi cab of performance cars. The Formula on the other hand looked upscale, though it didn’t have the Trans Am’s lower body spoilers, the Firebird looked sleek like a European sports car. It had a body colored rear spoiler, the 1982-1984 Trans Am’s hood scope, and optional two-tone paint scheme with lower body horizontal stripes. Combine this with a standard cloth interior, bucket seats, center console, and one of the best looking dashboard layouts in the business, and you’ll quickly realize no other performance car during this time gave so much to the customer for the dollar. The Formula for 1991-1992 received a new front-end, updated rear bumper, updated rear spoiler, and slightly revised interior. 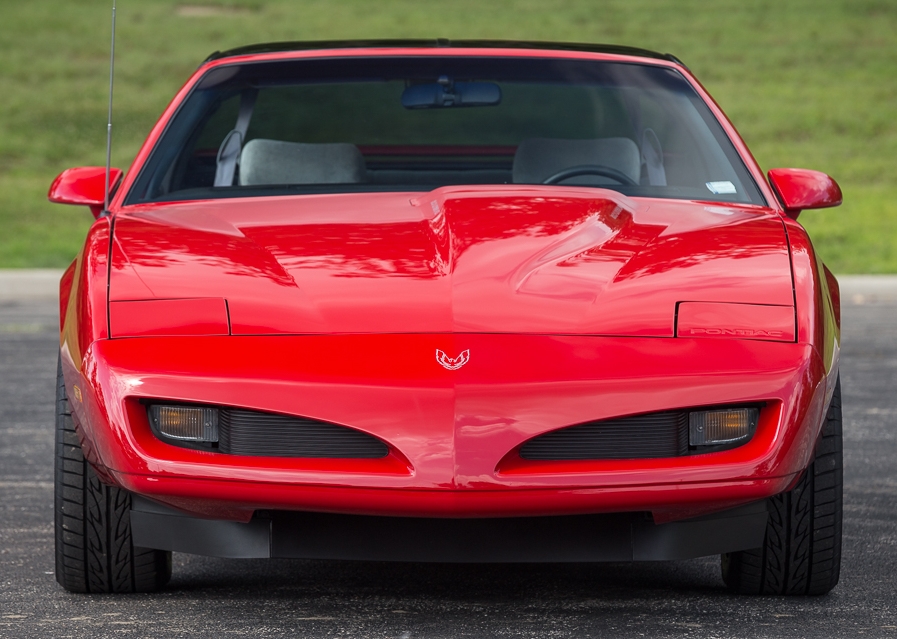 The WS6 handling package was a finely tuned suspension with standard 4-wheel disc brakes, and 16 x 8 inch wheels with wide P245-50VR16 Goodyear Gatorback tires. The 5.0 liter Mustang LX and GT had mandatory rear drums. The WS6 gave the Formula handling on par with the Corvette – one of the best handling cars in the world back then. Though many Formulas had disc brakes some had rear drum brakes, one example of this was when Pontiac’s supply of rear disc brakes ran out towards the end of the 1991 model year, it was forced to use rear drum brakes as a substitute for a brief time period during that model year. 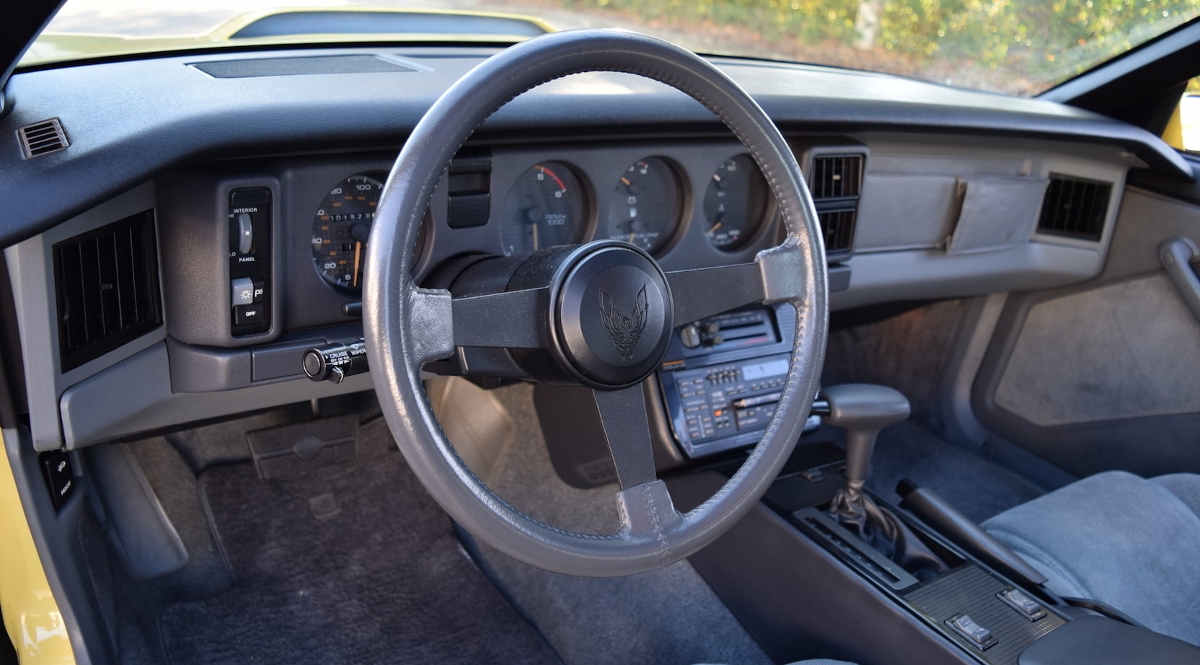 There were a few 1LE factory optioned Formulas produced towards the end of the 1987-1992 Formula production run. These cars had a race prepped suspension, bigger brakes, and other performance oriented goodies – air-conditioning was deleted when the 1LE
option was ordered. The most famous Formula is the 1991-1992 Firehawk which was produced by SLP. A buyer could order a 1991-1992 Formula from the factory with RPO code B4U which upgraded the Formula to a Firehawk. The Firehawk package started out at just a little under $40,000 and with every option selected the price was a little north of

$50,000. A set of unique 17-inch wheels with wide P275-40 17-inch performance tires, a modified 5.7 liter TPI V8 which produced 350 horsepower and 390 lb-ft of torque, a performance exhaust system, a 6-speed manual transmission, and many other performance goodies were standard. On the option list were such items as the Ferrari F40’s 4-wheel disk brakes, a racing roll bar, and many other performance goodies. Only 25 1991-1992 Firehawks based on the Formula were built, all of these had a red exterior. The Firehawk was the ultimate super car with race car acceleration, handling, and braking. 0-60 mph arrived in a really quick 4.6 seconds and the quarter mile took only 13 seconds flat at 106 mph. The Firehawk was the perfect sign-off to the 1987-1992 Firebird Formula production run. The Formula not only was the best performance bargain of the late-1980s and early-1990s it was one of the best performance cars of this time period.