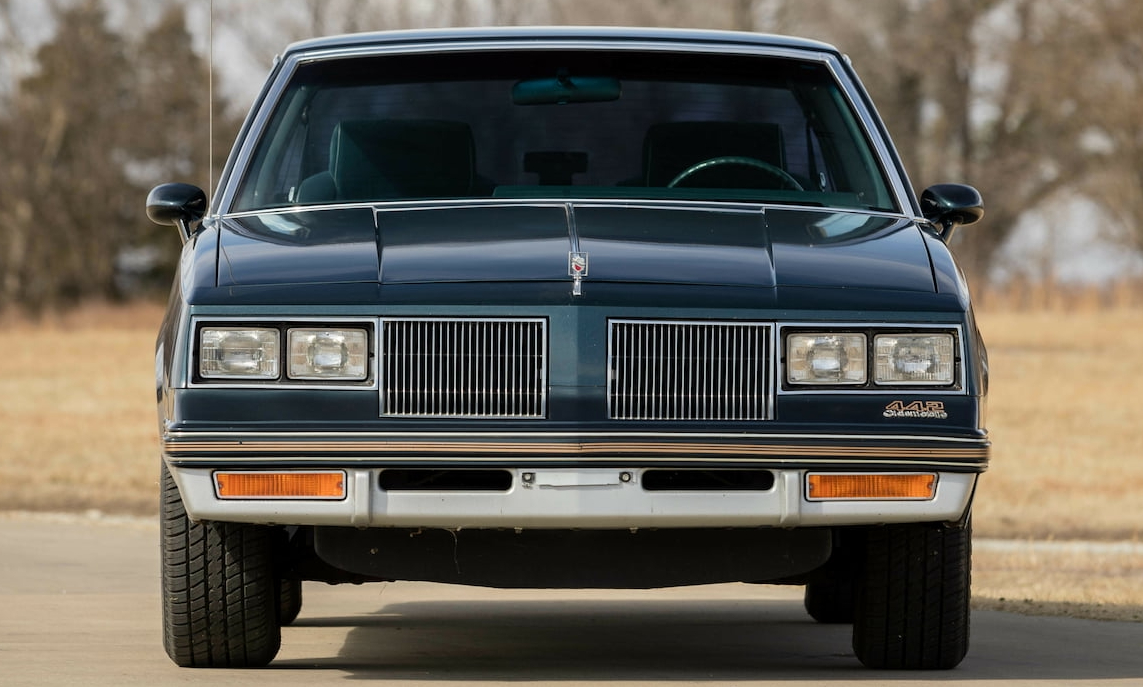 Oldsmobile which was a former car division of GM produced its share of legendary cars for a little over a century. It begin as a small car company in 1897 and soon grew to one of the most formidable automobile brands in the world. Unfortunately the Oldsmobile story ended when GM permanently shutdown Oldsmobile operations in 2004. For American performance car traditionalists, Oldsmobile was gone many years before 2004. Oldsmobile’s fine tradition of producing a true traditional American performance car had ended when the 1987 model year ended. This is when its V8 powered rear-wheel drive muscle car, the 442 was permanently cancelled. The “442” name would return again for the 1990-1991 model year when it was given to a front-wheel drive compact Oldsmobile powered by a DOHC 4-cylinder engine.

The 442 was Oldsmobile’s premier muscle car for many years, it was a fierce competitor and was powered by some of Oldsmobile’s best high performance V8 engines during the Golden Era of the Muscle Car. After an absence of several years, the Oldsmobile 442 was back on track starting in 1985. It had the 2-door Oldsmobile Cutlass’s extremely popular exterior styling which consisted of a longer hood, short decklid, and a formal roofline. From 1978-1983, the Cutlass had been the best selling car in America for 5 out of 6 years. The 1985-1986 442 had the 2-door Cutlass’s very popular concave dual front grille design which was surrounded by 4 square headlights. For 1986 the grille pattern changed and was now colored black. For 1987 the 2-door Cutlass and 442 received a front-end update with modern flush headlights and dual flat grilles which on the 442 were colored black giving the 1987 442 a more attractive and modern look. It also had a modern version of Oldsmobile’s vertical taillights.

Even though the 442 with its 2-door Cutlass styling by 1985-1987 had become dated, it still looked modern and very sporty. Additionally with the 1985-1987 442’s few exterior color choices, two-tone color scheme, and gold accents and decals it looked the part of a modern 1980s muscle car. Ironically the 442 didn’t follow the trend of performance cars of this era which had blacked-out trim and/or body colored trim. The 442 did have some black trim pieces but still kept a lot of the 2-door Cutlass Salon’s chrome trim. The Salon was the Cutlass model the 442 was based on, essentially the 442 a Cutlass Salon with the W42 option packaged added. The 442 even kept the Salon’s luxury hood ornament. This was Oldsmobile’s way of reminding buyers its performance car was indeed a real Oldsmobile.

The interior was 100% Oldsmobile, it was sporty yet plush and luxurious for a muscle car. There were plenty of options available including removable T-Top roof panels and a high end stereo system. The interior was one of the classiest you were going to find in a 1980s American performance car and the attractive instrument cluster with round rally gauges was a nice added bonus which was a standard feature. The 442 was just the type of performance car that you wanted to take on long trips due its very comfortable cloth seating for 5 people and its plentiful trunk space. 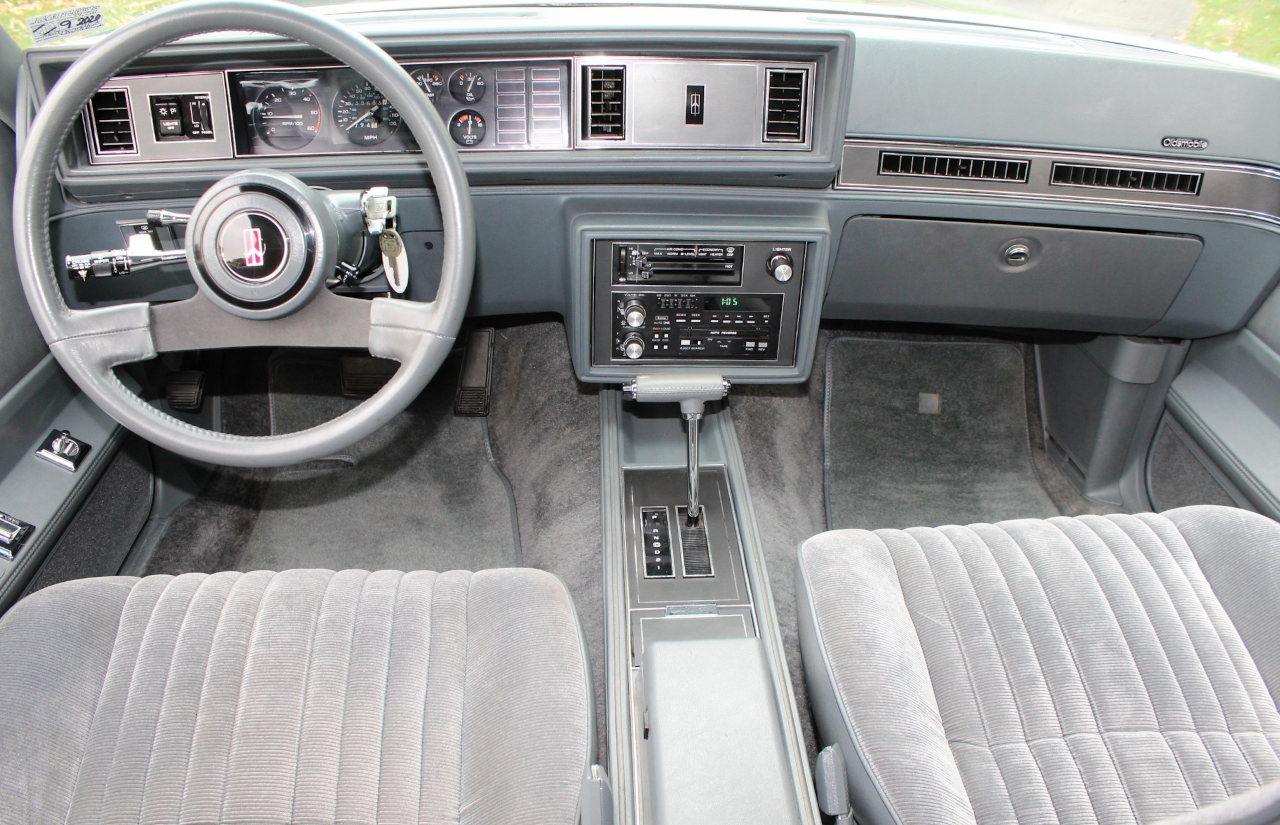 Ironically Oldsmobile had teamed up with Hurst Performance for 1983 and 1984 to build the low production Hurst/Olds which was also based on the 2-door Cutlass Salon. It had a flashy exterior paint scheme (a different one for each year), a wild rear wing spoiler, a hood scoop, and a racing style Hurst lighting rods automatic transmission gear changer. It was this successful return of the Hurst/Olds for 1983-1984 that forced Oldsmobile to revive the 442 again starting in 1985 to replace the Hurst/Olds.

The 1983-1984 Hurst Olds was powered by Oldsmobile’s High Output version of its 5.0 liter (307 cubic-inch) V8 which produced 180 horsepower and 245 lb-ft of torque. It had a Rochester Quadrajet 4-barrel carburetor just like the golden era Oldsmobile muscle cars except it was computer controlled. This engine carried over to the 1985 442 unchanged with the same horsepower and torque figures. However during the middle of the 1985 model year the 5.0 H.O. V8 received a roller cam and new heads in order to improve emissions and fuel efficiency. Unfortunately horsepower dropped to 170 but torque increased to 250 lb-ft and it would also power the 1986-1987 442. However there are rumors that Oldsmobile also produced this engine with the roller cam and older style heads in late 1985 and possibly into the 1986 model year. This would explain why Oldsmobile gave the 1986 442 a 180 horsepower rating exactly like the 1985 442. The 1985-1987 442 was mandatory with a 4-speed automatic transmission, a performance oriented 3.73 rear axle ratio, and a a fantastic sounding free-flow dual resonator exhaust system. The 1985-1987 442 went 0-60 mph in around 9.0 seconds. This was quick for its day and quick enough to give honor to the 442 name. 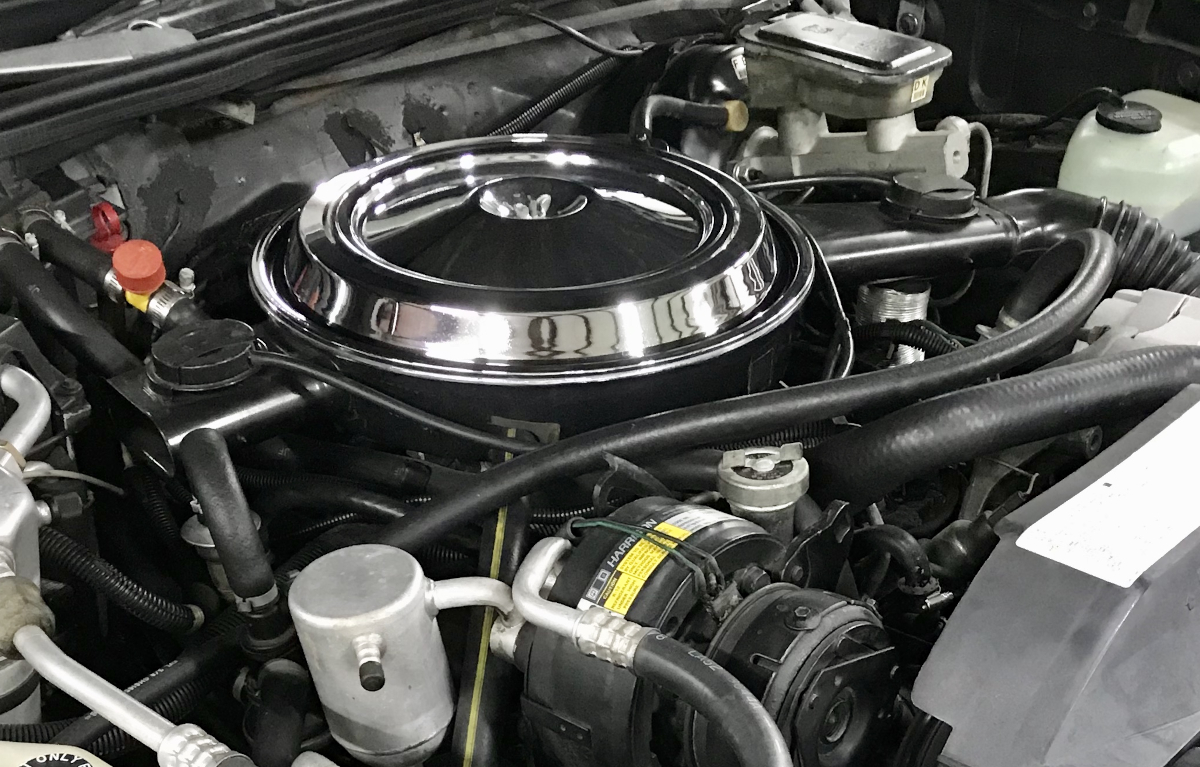 Oldsmobile with the 442 offered the handling, steering, and braking that 1980s performance car customers wanted. Unfortunately where the 442 fell short was it didn’t have a four wheel disc brake option, fuel injection, and at least 200 horsepower. But what the 442 had was enough to make it a serious traditional muscle car in the 1980s decade. It would be the last traditional V8 powered muscle car that Oldsmobile offered to its customers, someday the car collector community will discover how special the 1985-1987 Oldsmobile 442 is and prices will skyrocket. Until then the 1985-1987 442 remains a bargain for anyone wanting a fun to drive traditional muscle car from the 1980s – after-all subjectively it was the last of the great Oldsmobiles.