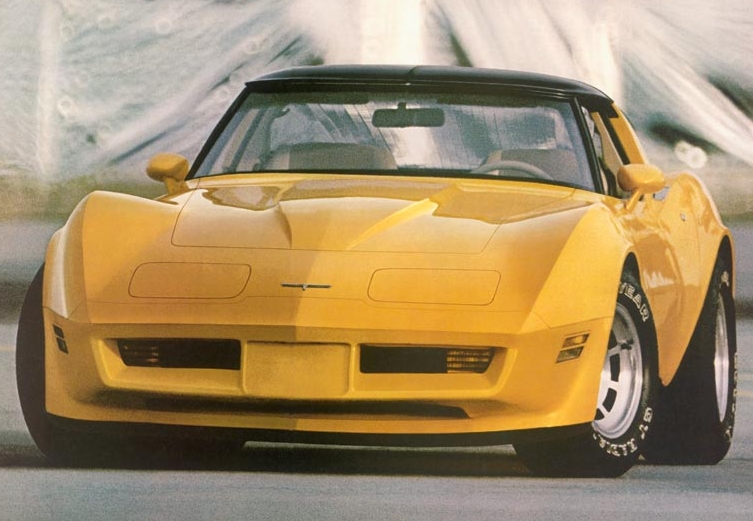 For the 1953 model year, the Chevrolet Corvette began life as a 2-seat speciality car rather than a true performance car, it was stuck with a meager 150 horsepower Blue Flame straight-six engine and a 2-speed Powerglide automatic transmission. By the late-1950s the Corvette was transforming into a serious performance car as more power was being extracted out of the Chevrolet small-block V8 under its hood. By the mid-1960s with the introduction of the Chevrolet big-block V8 option in the Corvette, the Corvette’s legendary performance reputation was solidified. By 1975 the Corvette’s standard engine was a low-compression 350 cubic-inch small-block V8 which was laden with emissions control devices and rated at a meager 165 horsepower. Fortunately there was a 205 horsepower 350 V8 available at extra cost for 1975. It was during the mid-1970s that the Corvette had made the transition to an elegant luxury 2-seat sports car. Chevrolet had softened the once blunt front and rear styling by the mid-1970s, thus transforming the Corvette into a work of art leading to increased sales. By 1975 Corvette sales were better than ever. Chevrolet would continue to rely on the Corvette’s looks to sell Corvettes while very gradually improving performance again.

The third generation Corvette or sometimes referred to as the “C3”, spanned from 1968-1982. For the 1980 model year, Chevrolet gave the Corvette an attractive front and rear-end redesign which made the Corvette look modern even though its basic overall body lines dated back to 1968. Even though it was an old platform the redesign gave the Corvette a new lease on life and kept sales strong. The front-end for 1980 was now more aerodynamic and had a lower front air dam – overall the front-end had a more streamlined look than its predecessor. The dual horizontal front grilles were now more rectangular and smaller. The parking lights were in the outside outer edges of these grilles. The headlights were the familiar four round pop-up units which all C3 Corvettes had. The rear still had 4 round taillights which were similar to those found on previous C3 Corvettes, what was new was the very pronounced integrated rear decklid spoiler. This was different than the bolt-on rear decklid spoiler that was standard on the 1978 Corvette Indy Pace Car Edition and optional on the 1979 Corvette. Also new to the exterior for 1980 were modern looking front quarter panel air extractors (one on each front quarter panel). The 1980 Corvette had fiberglass body panels like all previous Corvettes. The 1980 Corvette’s fiberglass hood had a more streamlined design and the hood bulge had a more triangular look than previous C3s.

Chevrolet had done a great job of updating the Corvette’s interior, its last update had been for 1978. The 1980 Corvette’s interior looked the part of an upscale luxury sports car especially when leather seats were ordered in lieu of the standard cloth seats. 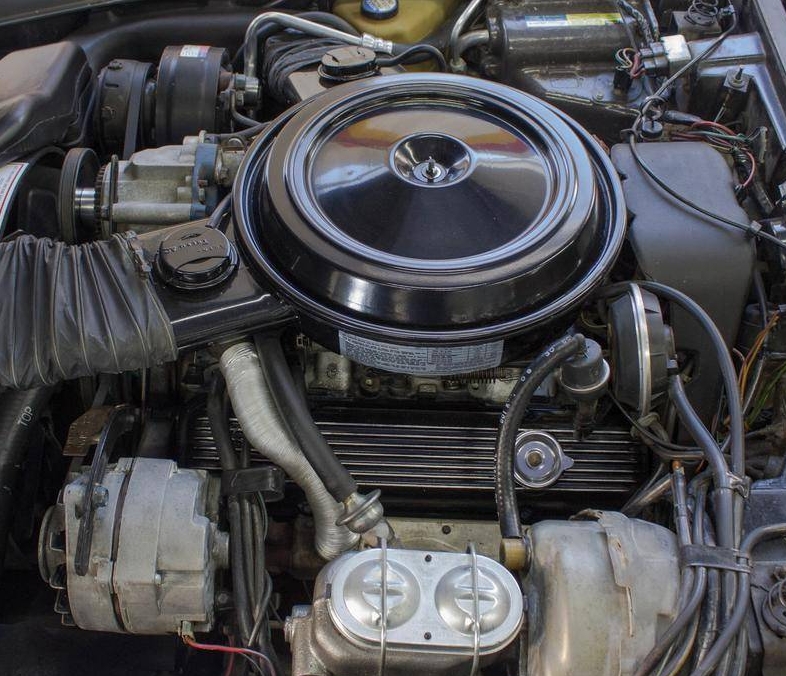 The 1980 Corvette carried over to 1981 and 1982 virtually unchanged. There were some exterior color differences over the three model year period and some interior color differences, but by-in-large Chevrolet left the big stuff alone and made no major changes. For 1981 there was only one available engine – the 190 horsepower L81 350 cubic-inch V8. It was available with with both a 4-speed manual transmission and a new 4-speed automatic transmission. Unfortunately performance wasn’t as good as the 1980 L82 Corvette but still respectable with the 4-speed equipped L81 1981 Corvette hitting 0-60 mph in 8.1 seconds and the quarter mile in around 16 seconds flat. 1981 Corvette production was very good at 40,606 units which was only 83 units less than 1980.

For 1982, Corvette production dropped to 25,407 units. The main reason for the drop was that word had leaked of the upcoming release of an all-new C4 Corvette. The big news for 1982 was the return of fuel injection to the Corvette, fuel injection had been 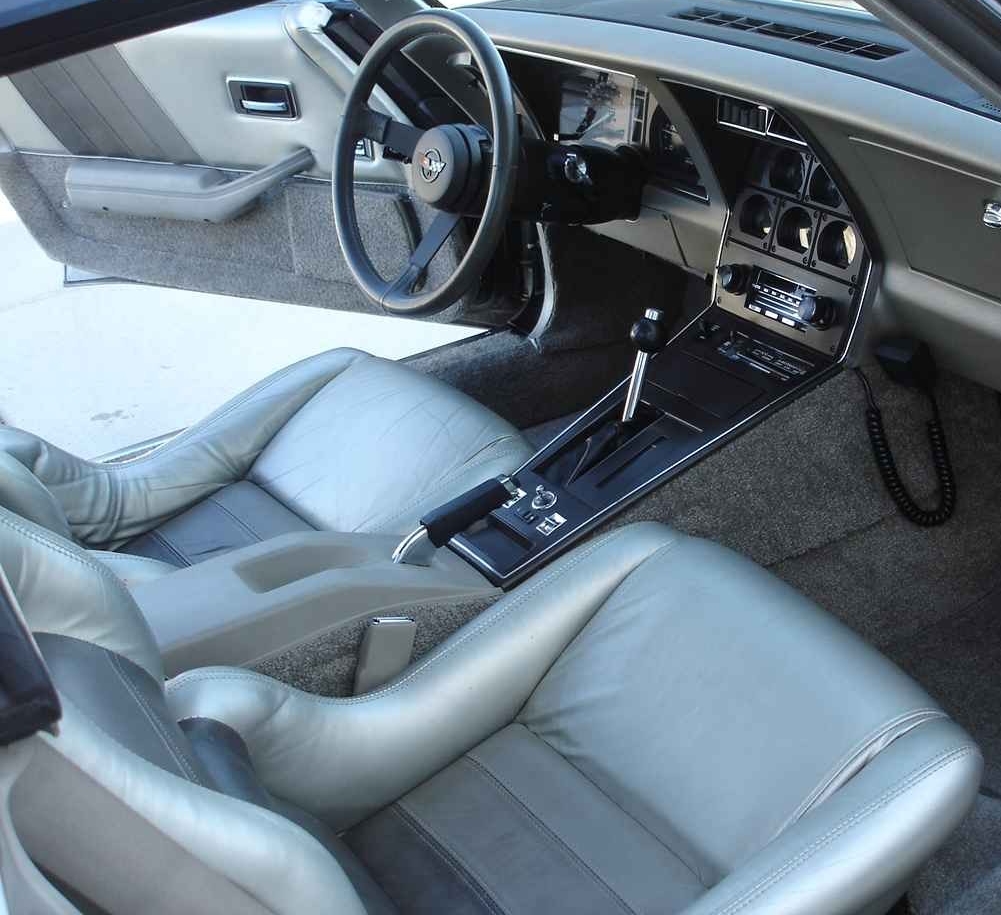 absent under the hood of the Corvette since the 1965 model year when it was optional. Back then it was a mechanical fuel injection system. For 1982 it was a computer controlled dual throttle body fuel injection system called “Cross-Fire Fuel Injection” or also known as the L83 350 cubic-inch V8 – it produced 200 horsepower, 10 horsepower more than the 1981 Corvette. Unfortunately a manual transmission was not available, a 4-speed automatic was mandatory. The 1982 Corvette went 0-60 mph in 8.1 seconds and the quarter-mile in 15.9 seconds. The great news for 1982 was that Chevrolet was celebrating the last year of C3 production with the “Collector Edition” Corvette which was mandatory with a beautiful silver-beige exterior color with gradient decals and silver and gray combination leather seats. The Collector Edition was loaded with many standard options including a unique set of finned 15×8-inch cast aluminum wheels and a rear glass lift hatch for easy access to the cargo area. It was the only C3 Corvette to have this lift hatch feature, all other 1978-1982 Corvettes had the fixed rear fastback window. The Collector Edition was the first Corvette to have a base price of over $20,000. Even with this hefty price tag 6,759 1982 Corvette Collector Editions were produced.

When 1982 Corvette production came to a close it was an end of an era. The all-new 1984 Corvette which replaced it was a new bred of Corvette engineered to compete with European sports cars. It would still have some traditional Corvette DNA but the familiar C3 curvy styling with the humps above the wheel wells was gone forever. The 1980-1982 Corvette bridged the gap between the old school Corvettes and the newer European inspired Corvettes. This is why the 1980-1982 Corvette is so special and makes for the perfect addition to any car collector’s collection.