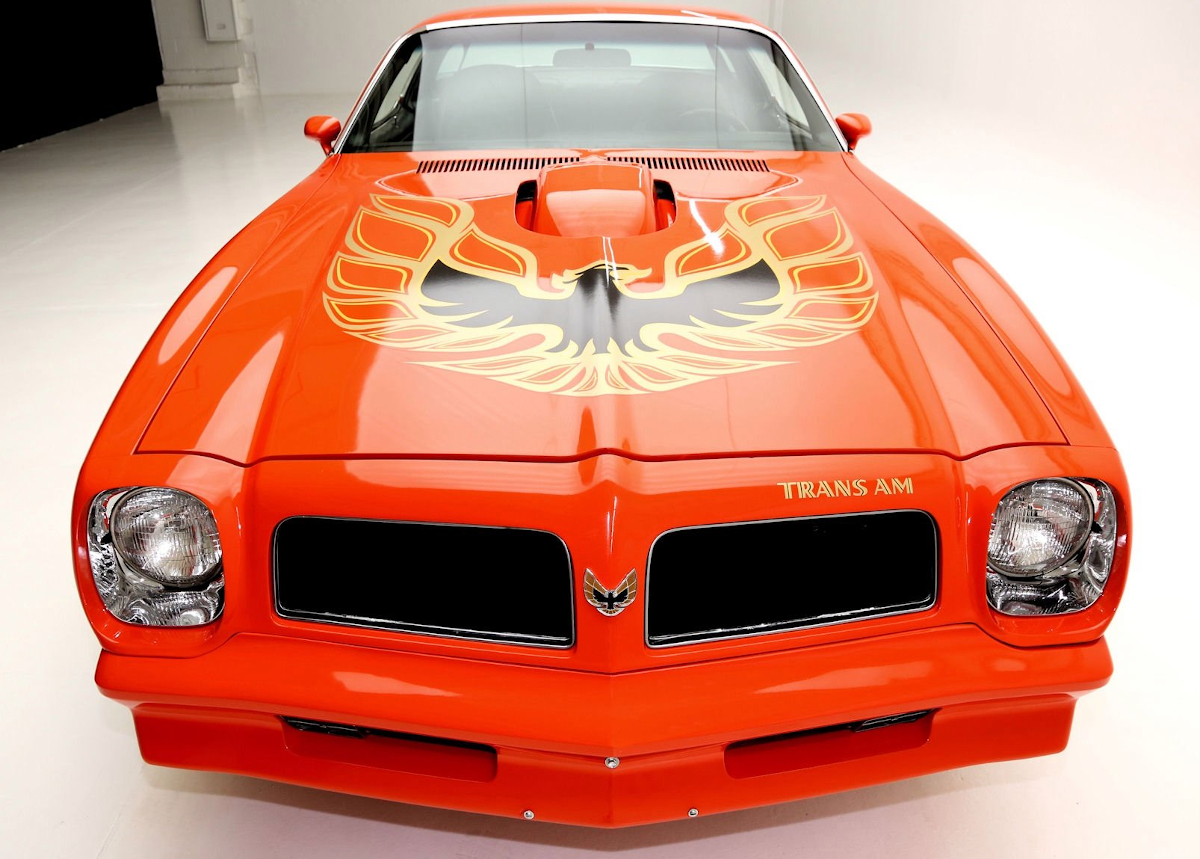 By 1976, the golden era of the muscle car was over. Most American muscle cars were gone, the few that remained had V8 engines with lower horsepower ratings. For 1976 the largest and only displacement size available in the Chevrolet Corvette was a 350 cubic inch small-block V8. For 1976 the Chevrolet Camaro didn’t have a performance model. The performance oriented Camaro Z28 last made its appearance during the 1974 model year. The 1976 Ford Mustang was called the Mustang II and it’s best performance engine was a 134 horsepower 302 cubic-inch V8. For 1976, the Dodge Charger Daytona was the top-of-the-line Charger and could be equipped with an optional 400 cubic-inch big-block V8 engine but the Charger was now a 2-door personal luxury car and not a performance car. In other words it was bad times for American performance car buyers.

The one bright spot for muscle car and performance car fans for 1976 was the Pontiac Trans Am. It was the bridge connecting the past with the future. It was pure muscle car yet its styling would foreshadow the way of the future. It’s ironic that the 1976 Trans Am would be this car, it should have been replaced with an all-new Trans Am by 1976 at the latest. This second generation GM f-body platform that the 1976 Firebird, and 1976 Trans Am used along with the 1976 Camaro was an aging platform by the mid-1970s. It first debuted in 1970 and by 1976 it was 7 model years old which was considered dated by car industry standards at that time. Car development budgets at GM were very tight during the 1970s and during the mid-1970s there wasn’t the extra funds for the development of a new GM f-body platform. However Pontiac spent wisely its limited resources on mild periodic updates to the second generation Trans Am. The strategy was successful, second generation Trans Am sales kept skyrocketing and finally reached a yearly production peak of 116,535 units for the 1979 model year. Sales continued to remain strong through the 1981 model year which was the second generation Trans Ams last model year of production.

With the 1976 Trans Am it was like the original muscle car era never ended, standard was a 185 horsepower 400 cubic-inch V8 and there was an optional 200 horsepower 455 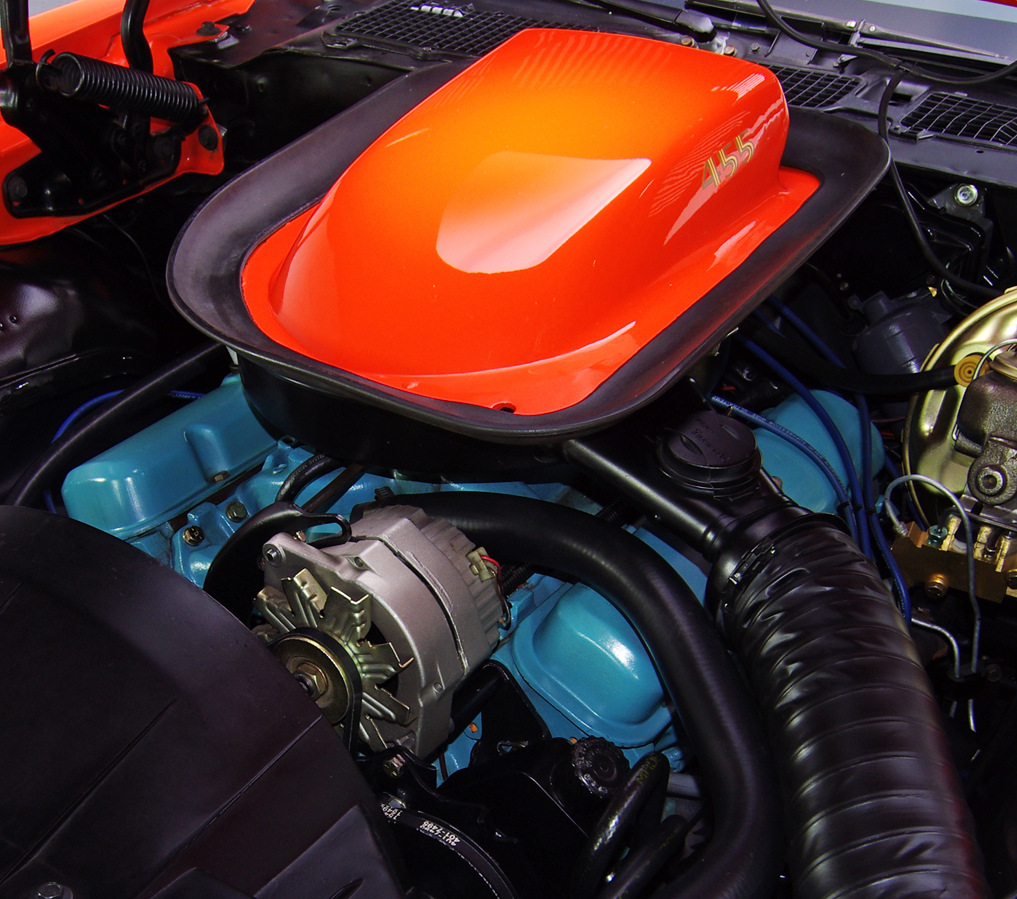 cubic-inch V8. Horsepower may have been down considerably due to new government mandated engine pollution control devices and low compression ratios, but the 1976 Trans Am equipped with the 455 was the top 1976 American performance car. The 455 had an extremely low 7.6:1 compression ratio, a mandatory 4-speed manual transmission, and a performance oriented 3.23 rear axle ratio. Car and Driver magazine back in day with the 455 V8 powered 1976 Trans Am obtained the quarter mile in 15.6 seconds at 90.3 miles per hour and 0-60 mph in 7.0 seconds. By 1976 standards this was lightning quick especially when you consider the 1976 Trans Am had a heavy curb weight of 3,750 lbs. The only other American performance car at the time that could accelerate this quickly was the 210 horsepower L82 350 cubic-inch V8 powered 1976 Chevrolet Corvette which could run the quarter mile in the mid-15 second quarter-mile range. The difference was the 455 V8 powered Trans Am felt a lot more powerful due its abundant 330 lb/ft torque versus the L82 Corvettes paltry in comparison 255 lb/ft of torque.

Cars magazine gave the 455 V8 equipped 1976 Trans Am its “Top Performance Car of the Year” award. Road and Track magazine was also very impressed by the 455 V8 equipped Trans Am’s quick acceleration but was even more impressed with its handling which obtained a .785 figure on its lateral acceleration handling test. Road and Track said the Trans Am’s handling was in the same league as the Ferrari Dino 308 GT.

Another reason for the 1976 Trans Am’s phenomenal sales was it’s beautiful exterior styling. Pontiac had found a way starting in 1976 to use a state-of-the-art urethane bumper cover assembly for both the front and back of the Trans Am. Not only did this give the bumpers the same exterior color of the rest of the exterior panels but it gave the 1976 Trans Am a beautiful streamlined look like an exotic sports car. Not Even the 1976 Corvette’s front and rear bumpers could match the look and design of the 1976 Trans Am’s front and rear bumpers. The 1976 Corvette’s bumpers were also state-of-the-art urethane however both the front and the back had black colored vertical bumperettes which interfered with the overall artistic flow of the bumpers. 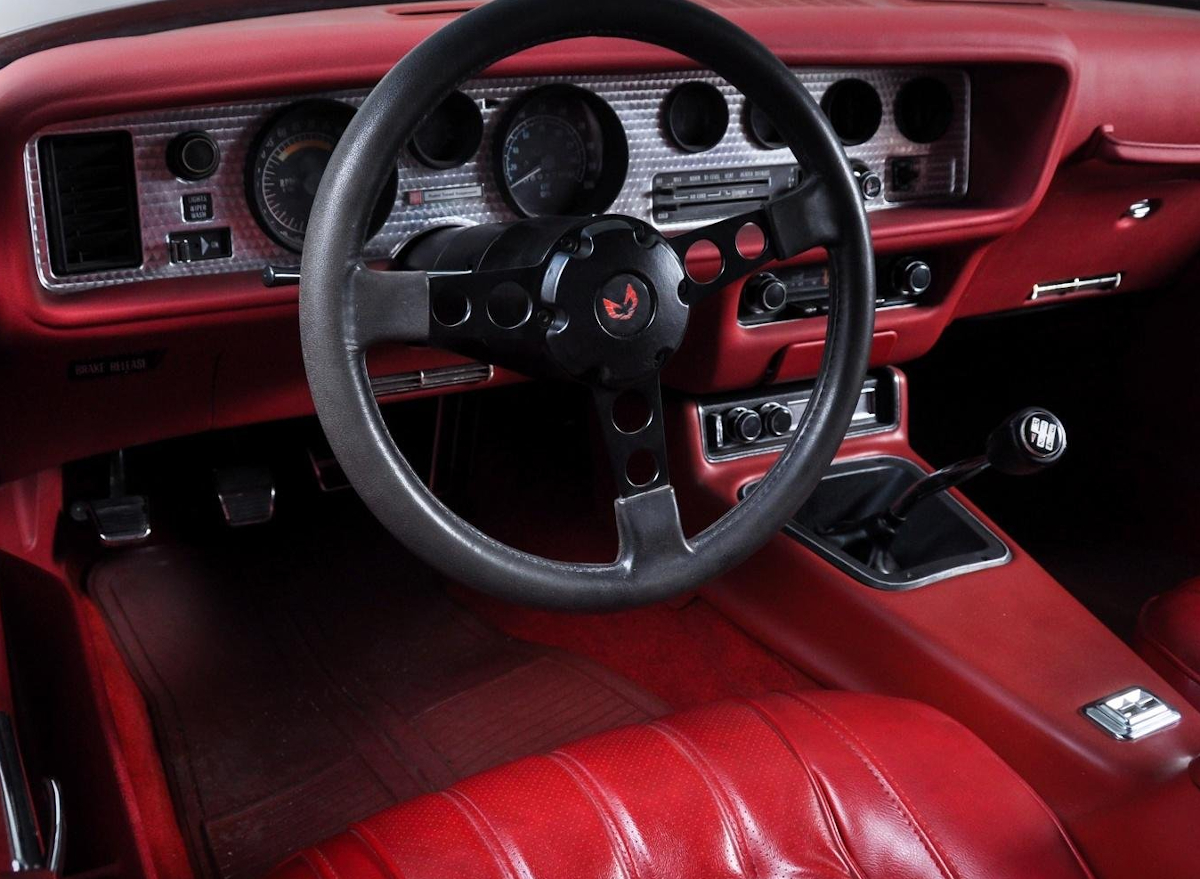 each of the rear wheels all combined together gave the Trans Am an overall look like nothing else on the road at the time. The option that best personified the Trans Am’s true personality was the $58 big bird hood decal. The interior layout was function and had an attractive and easily readable gauge cluster which was one of the best of this era. Pontiac also managed to improve the seats and other interior appointments to help keep the interior looking modern since its 1970 debut. The Trans Am was now available with a good number of luxury and convenience options. By 1976, Trans Am wasn’t just a well equipped performance car it was now a status symbol. And Pontiac didn’t stop there, it offered it’s first special edition Trans Am, the 50th Anniversary Edition, to commemorate 50 years of the Pontiac. It was the only 1976 Trans Am with optional Hurst removable T-Top roof panels and gold trim accents on the exterior and in the interior.