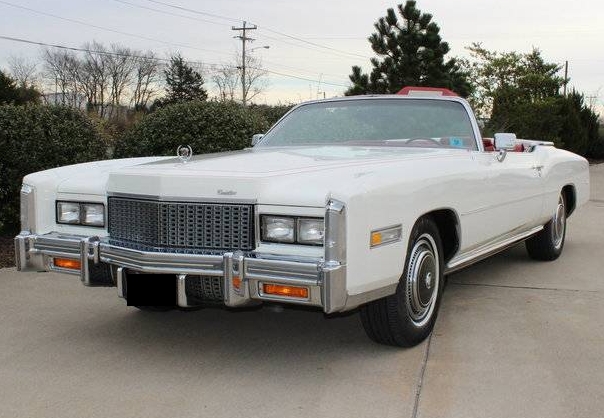 Cadillac is GM’s luxury car division, and back in the days when GM was the largest automaker in the world, Cadillac was the king of luxury cars. Cadillac’s success was offering the most luxury features in attractive big cars which had lots of glitzy ornamentation. During these times, driving a Cadillac was a sign you had made it, in other words you had obtained financial success. By the 1970s the Cadillac lineup had reached massive exterior proportions. The introduction of the smaller-sized 1975 Cadillac Seville was the first exception to this rule and the first sign the party for Cadillac would soon end due to the multiple phases of drastic exterior size reductions that were right around the corner.

When the 1975 model year rolled in, Cadillac debuted an updated Eldorado which was built on the seventh generation Eldorado platform. The seventh generation Eldorado first made its appearance for the 1971 model year. However Cadillac for 1975 gave the Eldorado’s exterior a beautiful makeover. The rear wheel fender skirts were now gone, and the exterior’s blunt edges were now more pronounced and blended well with the exterior’s slight curves giving the 1975 Eldorado a truly elegant look. It was now a car that looked more at home parked on Rodeo Drive in Beverly Hills than parked in front of the local grocery store. The Eldorado now had four new square headlights which at the time was an ultra modern look since most cars still had round headlights. Everything from the elegant ornate front grille to the perfectly sculpted taillights gave the impression the Eldorado was fit for a king. The body style would remain virtually unchanged through the end of the 1978 model year. 1979 would be the model year that the Eldorado would see a drastic exterior size reduction. However as great looking as the 2-door 1975-1978 Eldorado coupe was, the crème de la crème was the 1975-1976 Eldorado convertible. It was the ultimate large luxurious convertible. Nothing was more American than a large open air convertible back in the day, and owning a Eldorado convertible with all the luxury trappings was the ultimate American dream. 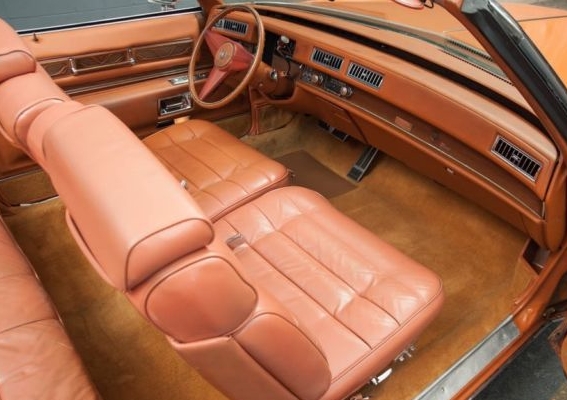 regulations never occurred and American built convertibles returned again in the early-1980s. Ironically Cadillac resumed production of the Eldorado convertible for the 1984 and 1985 model years with limited success.

The 1975 and 1976 Eldorado convertibles were virtually identical. The only differences between the two were slightly different front grille designs, slightly different horizontal rear taillights, and a few other very slight changes that only an Eldorado expert can immediately spot. The interior was standard with very comfortable leather seats. There were plenty of standard features including an automatic climate control system and a whole host of options. To say that the interior room of the 1975-1976 Eldorado convertible was spacious would be a understatement – there was plenty of seating room for six adults. The dashboard layout was very luxurious and modern. There was also a spacious trunk which fit lots of luggage. 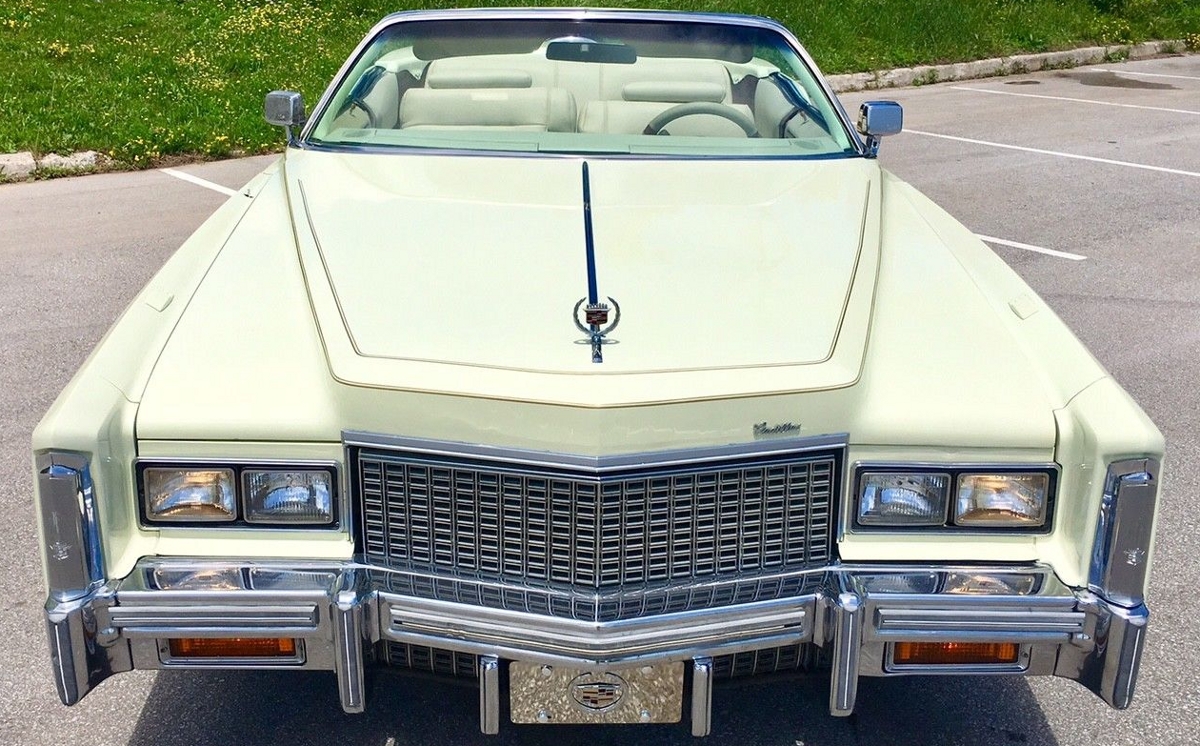 Unlike most big cars back in its era, the 1975-1976 Cadillac Eldorado convertible had front-wheel drive, this configuration gave the Eldorado a flat floor in the interior cabin which improved legroom. Standard was the largest displacement V8 ever to be offered in a production car, Cadillac’s 500 cubic inch V8 which 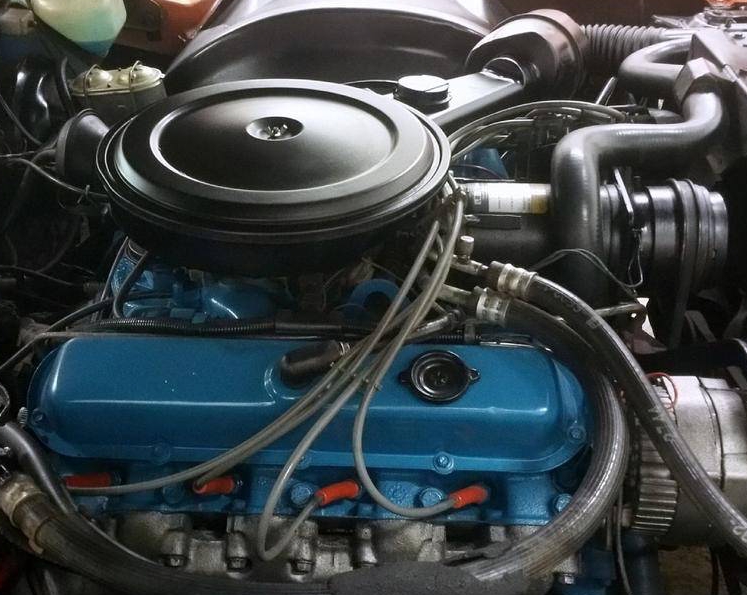 was a whopping 8.2 liters of displacement. A 3-speed automatic transmission was mandatory. Standard in the Eldorado for 1975-1976 was the Rochester 4-barrel carburetor equipped 500 cubic-inch V8 which produced 190 horsepower and 360 lb-ft of torque. Optional was a Bendix Electronic Fuel Injected 500 cubic-inch V8 which was factory rated at 215 horsepower and 400 lb-ft of torque. The fuel-injected 500 V8 propelled the approximately 5,150 lb Eldorado convertible from 0-60 mph in around 11 seconds. Considering the massive weight and the time period, this acceleration was actually quite good. Starting in 1976, all Eldorados had standard 4-wheel disc brakes which was a big improvement over the front disc and rear drum brakes of the previous year. 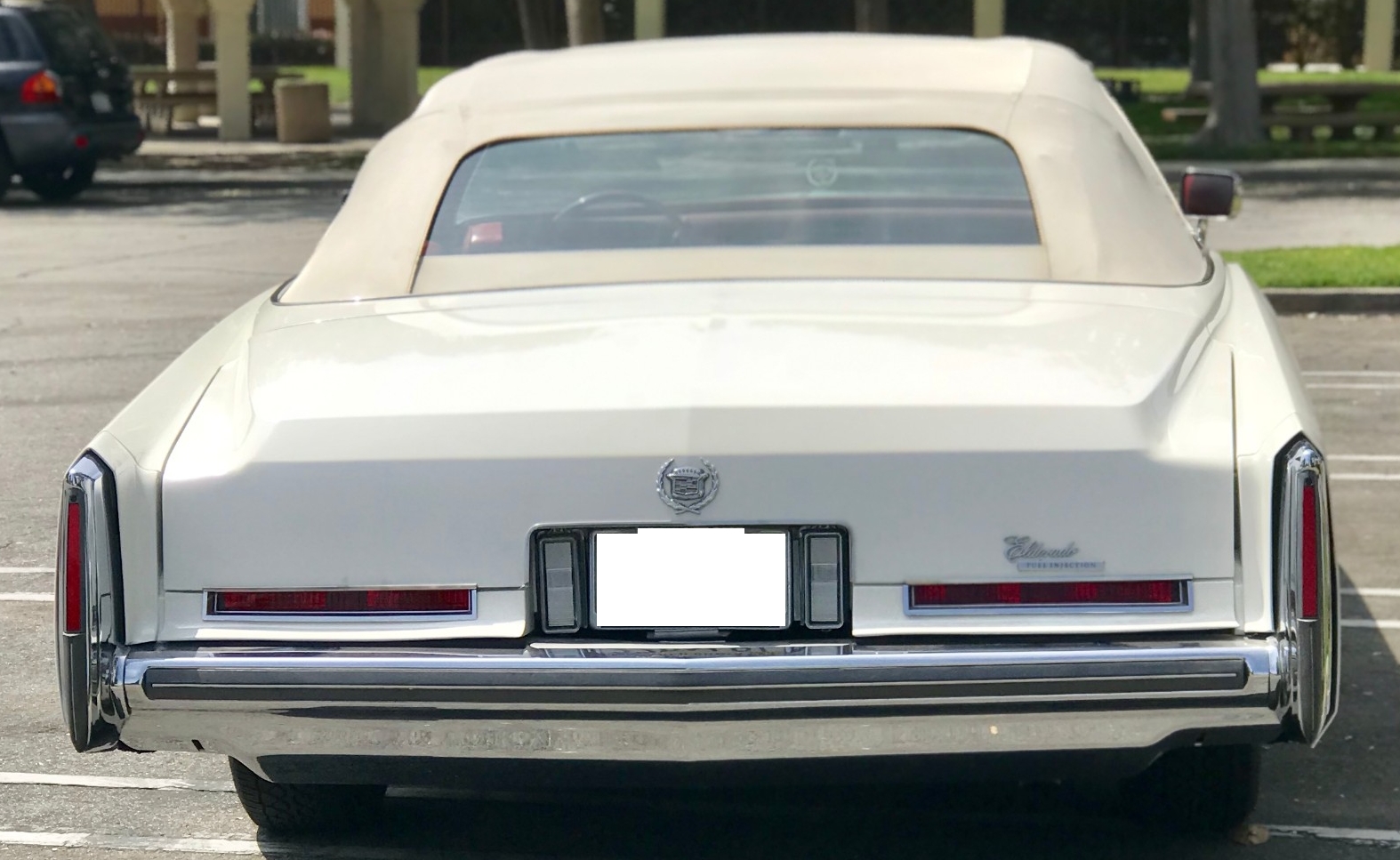 What’s so surprising is how the 1975-1976 Cadillac Eldorado convertible is today such a bargain. Many low mileage mint conditioned examples are less than $20,000, this is a downright bargain for such a unique convertible that was one of the best cruising vehicles that America has ever produced. The only problem you’ll have is building a garage big enough to store it.