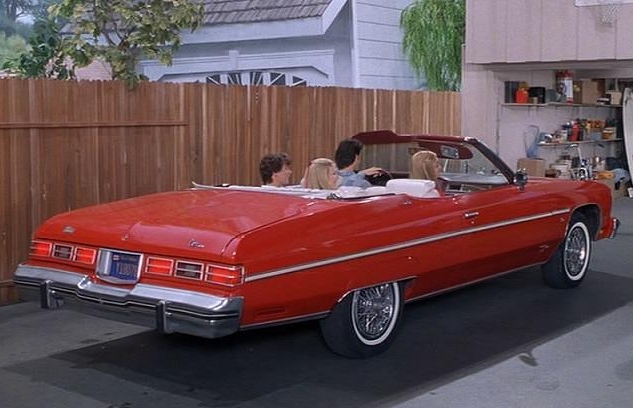 What is so special about the 1973-1975 Caprice Classic Convertible? It was the last of its kind, a big 2-door Chevrolet which could fit 6 adults comfortably and had a massive trunk. It’s the ultimate boulevard cruiser – a big car with a cushy ride. It’s hard to describe how fun these cars are to drive with the top down – wind in the hair, a nice comfortable ride with plenty of shoulder and legroom. Add to that the hum of a V8 motor and you get the picture. In other words this is the type of car you really want to drive from New York City to Los Angeles in the summertime with the top down. Not to mention when the convertible top was up, the Caprice Classic still looked good and there was plenty of headroom for interior passengers.

Chevrolet with the 1973-1975 Caprice Classic used a simple formula, it offered these cars with not many standard features. However it had a long list of options available including power seats, power windows, power door locks, cruise control, Air-Conditioning, etc. The net effect is that most buyers ended up paying a lot more than base price since many owners loaded up their Caprice Classic Convertibles with options.

The engines may have been tamer in the 1973-1975 Caprice Classic Convertible than in previous full-size Chevy convertibles, but they still provided ample power and good low-end torque. For 1973, the base engine was a small-block 2-barrel 400 cubic-inch V8 rated at a meager 150 horsepower but had 295 lb-ft of torque. Optional was Chevrolet’s big-block 4-barrel 454 cubic-inch V8 rated at 245 horsepower and 375 lb-ft of torque. The 454 was standard with dual exhausts. For 1974 both engines carried over unchanged except the 454’s output had dropped to 235 horsepower and 360 lb-ft of torque. New to the 1974 option list was a 4-barrel equipped version of the small-block 400 which produced 180 horsepower and 290 lb-ft of torque. Unfortunately when 1975 arrived, so did the mandatory catalytic converter along with other power robbing pollution controls. The powerful 4-barrel 454 really took a hit, its output was down to 215 horsepower and 350 lb-ft of torque. A dual exhaust system was still standard with the 454, however it was now routed through the new catalytic converter with only one exhaust pipe, technically 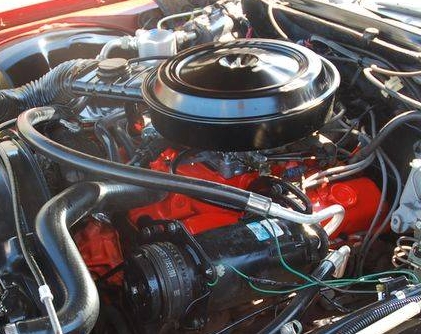 it was really a dual outlet exhaust system and not a true dual exhaust system. The base 2-barrel 400 of the previous two model years was gone it was now replaced by a small-block 2-barrel 350 cubic-inch V8 rated at 145 horsepower and 250 lb-ft of torque. For the California market only, the base engine was a 4-barrel 350 V8 rated at 155 horsepower and 250 lb-ft of torque. Fortunately the optional 4-barrel 400 was still on the option list, its horsepower output only dropped to 175 and surprisingly torque increased to 305 lb-ft. When looking for a Caprice Classic Convertible, the 454 V8 is the preferred engine option, with its superior horsepower and torque ratings, it was the quickest of the bunch taking only around 9.5 seconds to go 0-60 mph for the 1973-1974 Caprice Classic Convertible. For the 1975, it took an extra second. For this time period performance like this from a heavy 4,500-lb convertible like the Caprice Classic was considered lightening fast. However many buyers back in the day, opted for the 350 and 400 V8s since they offered better fuel efficiency.

It’s been over 40 years since the last Caprice Classic Convertible was produced, up until around 10 years ago these cars had been forgotten in classic car circles and could be had for as little as a few thousand dollars. Now these Caprice Classic Convertibles are hot commodities on the classic car market. Expect to pay a minimal of $15,000 for a decent example while very pristine examples are now as high as $40,000. These cars provide a sound investment for any car collector, one which reaps many rewards when cruising on a nice day with the top down. It’s these rare times in life like this when time appears to standstill and there isn’t a care in the world. Could there be a better endorsement of this car than this statement? I think not!