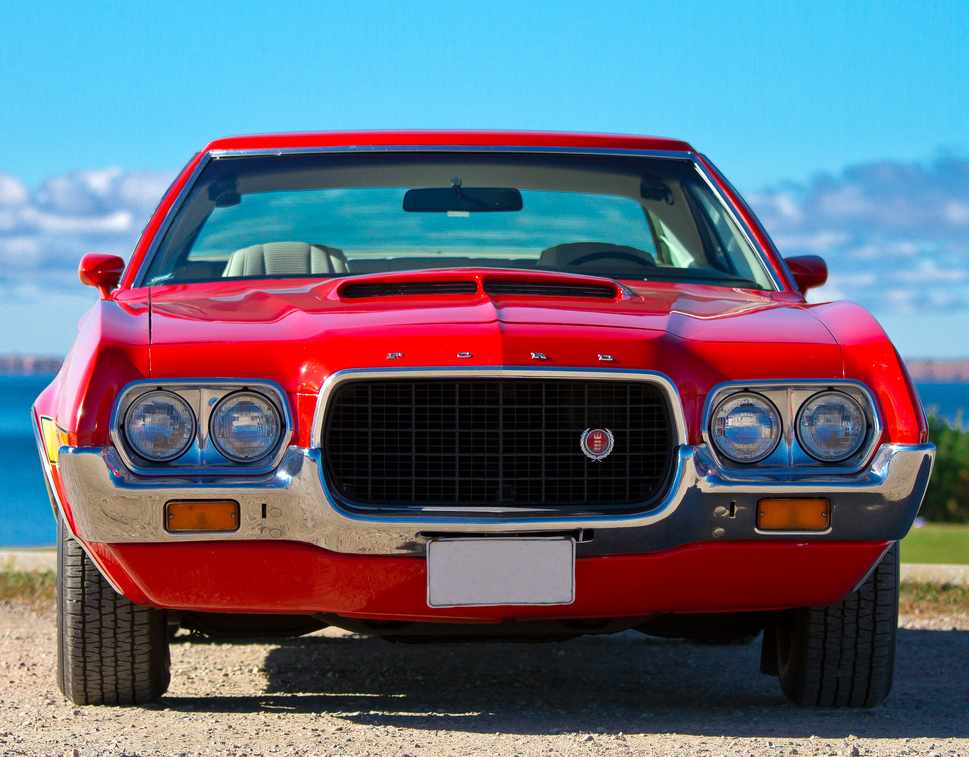 Ford’s release of the 1966 Fairlane GT and GTA and 1968 Ford Torino GT were not as successful as the Pontiac GTO and some other muscle cars of this era. These mid-size Fords were solid muscle cars available with a good choice of high-performance engines but their exterior styling wasn’t on par with the Pontiac GTO, Dodge Charger, and few other muscle cars of this era. Then in 1970 with the introduction of the sleek 1970 Torino GT, Ford had finally produced a mid-size muscle car with exterior styling that rivaled its competition. However Ford finally created mid-size muscle car styling perfection with the muscle car version of its new third generation 1972 Torino, called the Gran Torino Sport.

Indeed the Gran Torino Sport was a big hit and a big part of its success was its great styling. Even in 2-door hardtop configuration it was a great looking car but the 2-door fastback version which Ford called the SportsRoof was Ford styling at its very best during this era. It had a massive front grill and four headlights each pair of headlights resided inside oval bezels that looked similar to those used on the 1961-1963 Ford Thunderbird. The styling consisted of a long hood, short decklid, and curved side body panels. The back of the Gran Torino Sport had a streamlined trunk panel that curved down in the direction of the narrow chrome bumper where the twin tail lights resided. The rear design was more simplistic than previous Torino models but it was a futuristic look that complimented the rest of the sleek Gran Torino Sport’s exterior styling. The Sport was standard with an attractive hood scoop and available with body colored racing style dual side mirrors. Optional was a decal striping package that spanned from the front quarter panels back to the rear quarter panels. Overall the Sport looked more like a NASCAR race car than the average car on the road at the time.

Where the Gran Torino Sport was deficient when compared to previous high-performance Torinos, was its available engines. 1972 was the first year that U.S. market new cars were required to use only unleaded gasoline which was lower in octane at the time than leaded gasoline. The end result was a considerable drop in engine compression ratios which caused a drop in horsepower for most engines. 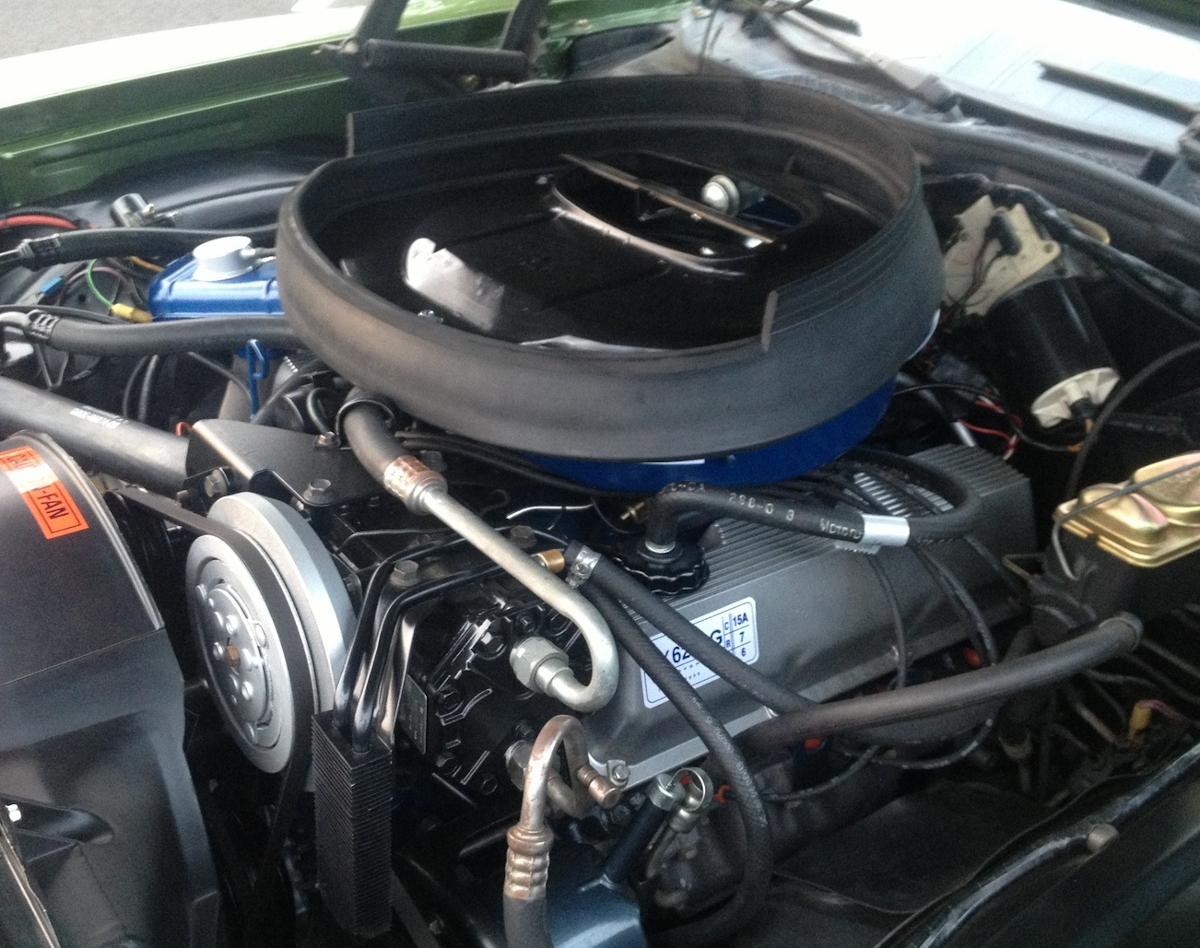 The “Cobra Jet” designation for the 1970-1971 Torino went to the 429 V8 and was rated at 370 gross horsepower. Ford hinted with its move of the Cobra Jet designation to the 4-barrel small-block 351 in 1972 that big-block V8s would soon be extinct. One of the problems with the Grand Torino Sport was that it was heavier than previous 2-door Torinos. Its curb weight approached 4,000 lbs when equipped with the heavy 429 big-block V8. A 351 Cobra Jet with a 4-speed manual transmission propelled the Gran Torino Sport down the quarter mile in about 15.0 seconds which by 1972 performance standards was considered very quick.

The Sport also had an attractive modern interior and a wide array of options. Standard was a front bench seat but optional bucket seats with a center console and 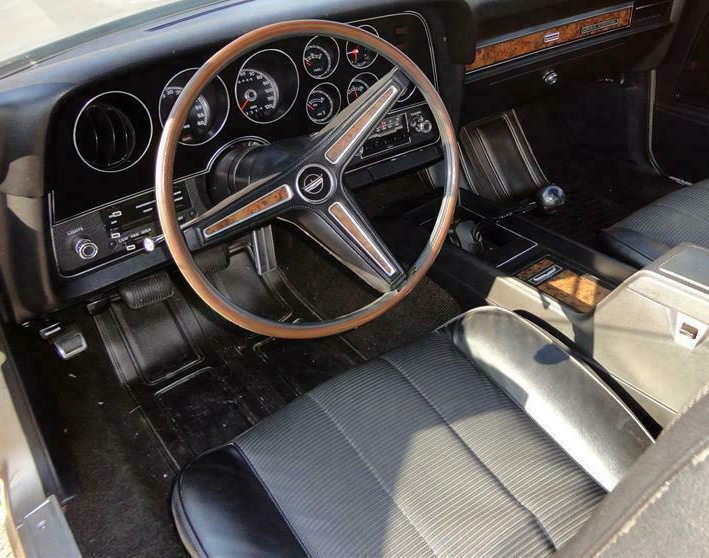 Unfortunately the success of the Gran Torino Sport for 1972 would be short lived. For 1973 new U.S. front bumper regulations necessitated the use of a larger less appealing front bumper which changed the whole character of the Gran Torino Sport’s front-end in 1973 making it more ordinary in appearance. By 1974 the SportsRoof fastback was gone, by 1975 the 351 Cobra Jet V8 was gone, and by 1976 the Sport model were gone. By 1977 the Gran Torino was also gone. The 1972 Grand Torino Sport may have not been the fastest mid-size muscle car that Ford ever produced but it was the best looking mid-size muscle car that Ford produced. Yet the Gran Torino Sport had enough high-performance under the hood when equipped with the 351 Cobra Jet to keep pace with a good number of the high-compression muscle cars from the 1960s.