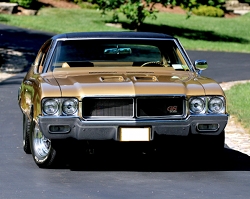 Every good thing must come to an end. 1970 was the pinnacle for GM’s high performance engines. Never again would there be such an array of different high performance V8s available from GM. Everything from small-block to big-block V8s were available and this included a wide array of small, medium, and large displacement V8s. This meant there was a high performance V8 from all GM divisions to meet every customer’s needs. Even GM’s luxury division Cadillac, packed a serious punch with its high compression large displacement V8s in 1970, its top V8 for 1970 was the high compression 500 CID V8 rated at 400 gross horsepower.

It was no surprise the array of great performance engines Chevrolet, Pontiac, and even Oldsmobile offered for 1970. The real surprise from GM for 1970 was Buick, a division with no racing heritage and a modest engine development budget. Buick during this time was the conservative division that offered big solid reliable cars for those more mature buyers. It was not the division that catered to young baby boomers but more the division of your dear old aunt Gertrude.

Pontiac had started the muscle car craze when they introduced the 1964 GTO. Within a few years just about every different automaker had a high performance GTO competitor. Buick jumped into the muscle car market in 1965 with the intermediate A-body Gran Sport, which was essentially a Buick Skylark with a few performance goodies. For the 15,000 buyers who bought a 1965 Buick Gran Sport, the 401 cubic inch nailhead V8 was what they got. Buick simply referred to this engine as a “400”. GM during the mid-to-late 1960s had an internal edict that disallowed small and intermediate cars (except for the Corvette) from having an engine with a displacement larger than 400 cubic inches. As the 1970 model year began, it soon became apparent that one of its strongest performance contenders was the 1970 GS 455 Stage 1, a big surprise for many performance car fans at the time. A bone stock 1970 GS 455 Stage 1 as tested by Motor Trend magazine (January 1970 issue) ran the quarter mile in an earth shattering 13.38 seconds at 105.5 mph. The quarter mile time was so impressive Motor Trend at the time called the 1970 Buick GS 455 Stage 1 the fastest muscle car they ever tested. As a comparison Motor Trend (September 1969 issue) obtained a 13.78 second quarter mile time for the legendary 1970 Plymouth Cuda equipped with the 425 horsepower 426 Hemi V8. 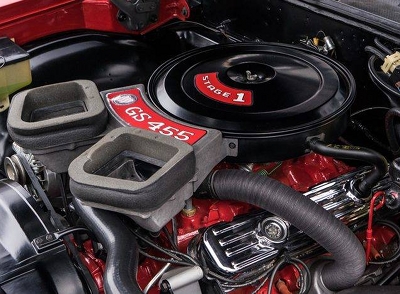 valves. Sitting on top of this wonderful motor, there was a decorative air filter assembly with two attached foam boxes that sucked in cold air from two solenoid controlled hood flaps. The hood flaps were opened once the motor warmed up. Not only was the Stage 1 loaded with horsepower, its 510 lb-ft of torque was enough to easy uproot a large tree. Buick would continue the Stage 1 455 option through the 1973 model year on the GS, but after 1970 horsepower would drastically decline due a lower compression ratio to meet the new unleaded gas standards.

Buick also introduced a GTO Judge type version of the GS in the middle of the 1970 model year – the Buick GSX. The GSX was a GS with a wild paint scheme, racing stripes, and spoilers. The GSX was clearly marketed to the younger crowd. There were only two engine 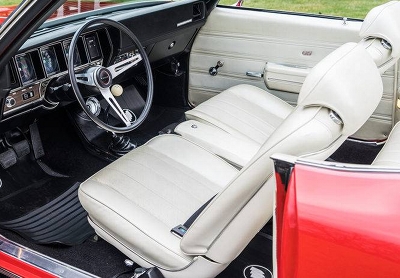 Buick certainly made muscle car history in 1970. As good as it got in 1970 for Buick, sadly only a little over 3,000 1970 Stage 1 455 V8 equipped GS and GSX models were produced. For 1970,  the GS and GSX were the only Buick models that could be ordered with the Stage 1 455. As the 1970s progressed Buick went back to its roots of making cars for the older more conservative crowd. Buick would only repeat its 1970 reign at the top again a little more than 15 years later with the 1986 – 1987 Buick SFI turbo 3.8 liter V6 Grand National and T-Type models.  As the old saying goes – “he who laughs last, laughs best”, Buick must have had one heck of a good laugh as the high compression muscle car era came to a close for GM at the end of the 1970 model year, since it was on top of the muscle car heap.