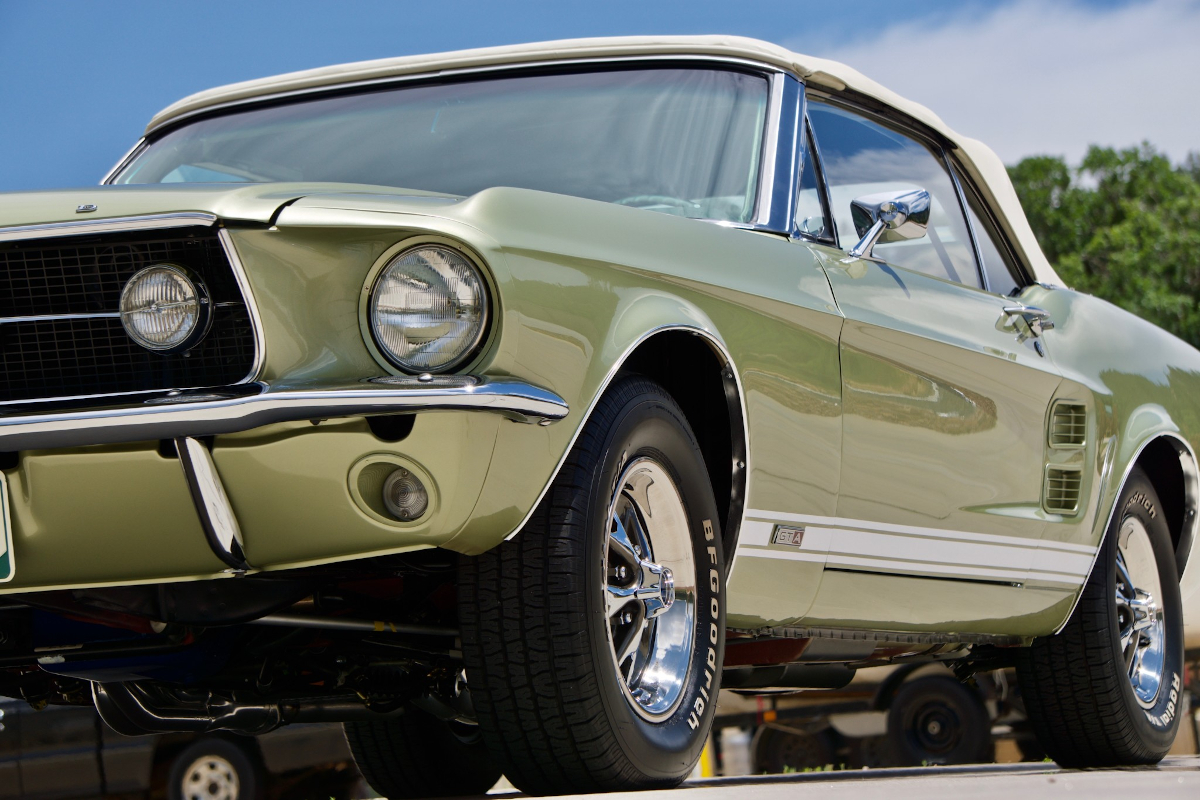 Ford had produced a phenomenal almost 1.3 million Mustangs from Spring of 1964 to the end of the 1966 model year. When Ford released an updated Mustang for 1967, it was a gamble. If Ford didn’t get the updated styling right, it would have seriously impacted sales especially considering that 1967 was the year when the Chevrolet Camaro and Pontiac Firebird first entered the market to compete with the Mustang. Even though 1967 Camaro production was an incredible 285,748 units and 1967 Firebird production was 82,560 units, the Mustang outsold both of them combined, with total 1967 Mustang production being 472,121 units which proved the updated Mustang was a big hit. However due to the new competition Mustang production had dropped from the 1966 Mustang’s production total of 607,568 units which was Mustang’s highest volume production model year ever. Had the Camaro and Firebird not debuted in 1967, there was a very good chance 1967 Mustang production would have surpassed 1966 Mustang production. Not to mention staring in 1967 Ford gave its Mercury division a version of the Mustang called the Cougar. With 1967 Cougar production being 150,893 units, its a safe assumption it also stole potential buyers away from the 1967 Mustang. 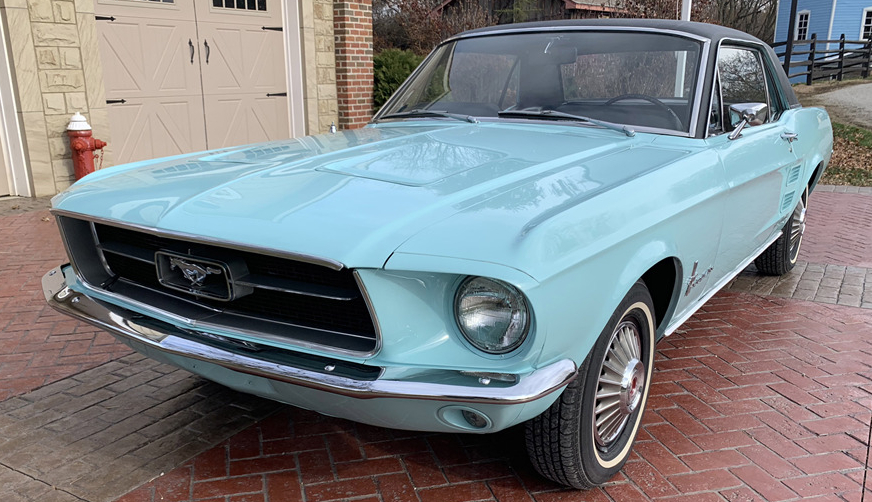 The 1967 Mustang like its predecessor was offered in three different configurations: 2-door coupe, 2-door fastback, and 2-door convertible. The biggest change for 1967 was the exterior styling. Though the general lines of the 1964 ½ – 1966 Mustang were still visible with the 1967 Mustang, the softer elegant styling of the 1964 ½ – 1966 Mustang was now replaced with an overall tougher and more gritty look especially in the frontend. The twin headlights remained but the front grille was now more angular and was larger in size. The rear quarter panels now had non-functional twin body colored air inlets right behind the side doors. The rear taillight area was now concave with larger vertical taillights that were also concave. Staring in 1967 the slope of the fastback’s roofline now went all the way back to the rear taillight area. The previous bowed rear fastback window was now replaced with almost flat rear fastback window. Overall the 1967 Mustang was slightly wider, slightly longer, and slightly taller than its predecessor. Only the 108 inch wheelbase was the same as its predecessor.

Ford would carryover the successful styling of the 1967 Mustang to 1968 virtually unchanged with only the very slightest changes. The most noticeable of which was the replacement of the rear quarter panel side vents with a thin vertical chrome trim piece. The Mustang for 1968 was still the best selling car in the pony car market segment the Mustang had created back in 1964, however for 1968 the competition was getting more fierce and numerous. For instance AMC released the Javelin for 1968 and Plymouth by 1968 had evolved its Barracuda into formidable competition for the Mustang. With this is in mind the 1968 Mustang’s total production of 317,404 units was still phenomenal. For 1969, the Mustang would undergo a major exterior redesign.

The Mustang’s interior for 1967-1968 had evolved nicely from its predecessor. The dashboard layout, optional bucket seats, and other interior appointments had 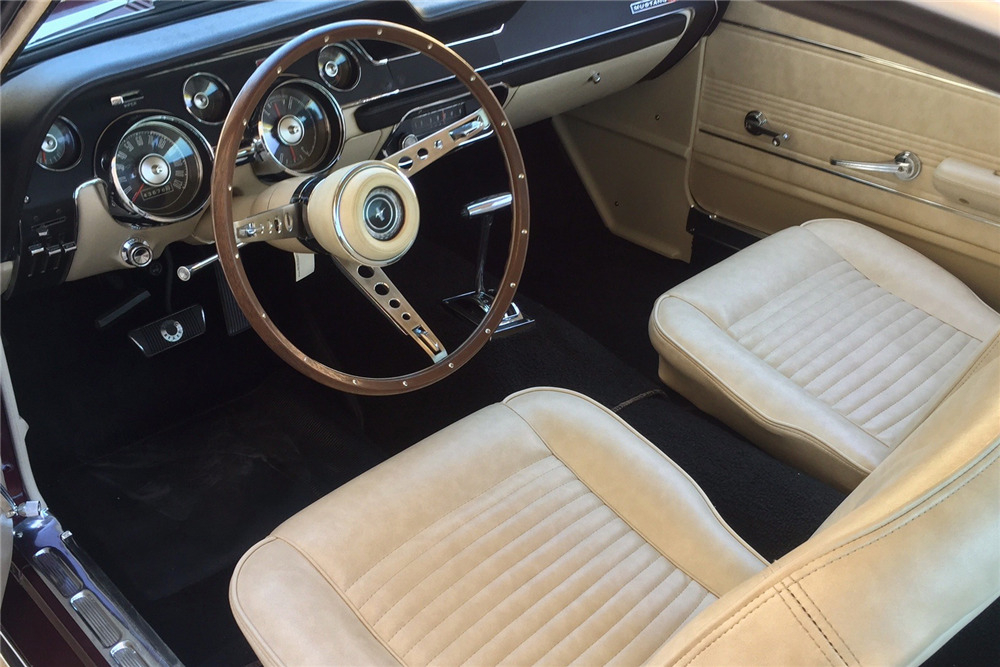 One big necessary change Ford made to the Mustang for 1967 was that it expanded the space in the engine bay to accommodate a big-block V8 engine. When Ford engineers designed the original Mustang they never expected the Mustang would need a engine more powerful than a small-block V8. However by 1967, the Mustang’s main competitor the Camaro could be equipped with a 396 cubic-inch big-block V8, so it was essential that the Mustang also have a big-block V8 option. For 1967-1968, Ford’s big-block 390 cubic-inch V8 which was rated at 320 gross horsepower for 1967 and 325 gross horsepower for 1968, became the Mustang’s mainstay big-block V8 during these model years. This 390 V8 was equipped with a 4-barrel carburetor and it was known as the S-code 390 V8. Interesting to note Ford also offered two very rare different 2-barrel carbureted versions of the 390 in the 1968 Mustang called the X-code and Y-code, both had horsepower ratings considerably lower than the S-code. When the S-code 390 V8 powered Mustang had the optional GT or GTA package, it really looked the the part of a true performance car. However when the Mustang transitioned into a legendary performance car was when the big-block 428 cubic-inch Cobra Jet V8 was offered as an option during the 1968 model year. It had a factory rating of 335 gross horsepower which was very underrated, true engine output was at least 20% 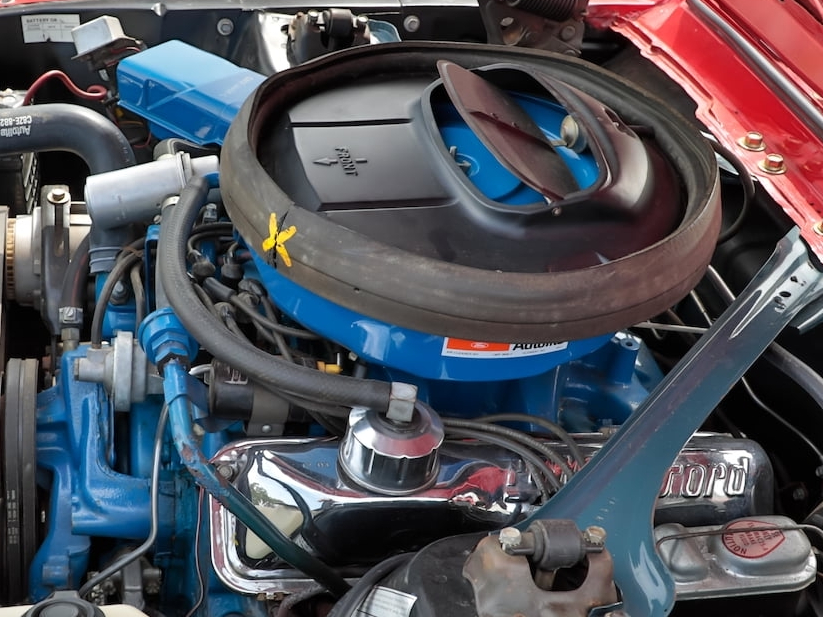 more, somewhere around 410 gross horsepower. Hot Rod magazine back in the day obtained 0-60 mph in 5.9 seconds and the quarter mile in 13.56 seconds at 106.64 mph which showed the world the 1968 Mustang with the 428 Cobra Jet V8 was one of the fastest accelerating muscle cars of this era.