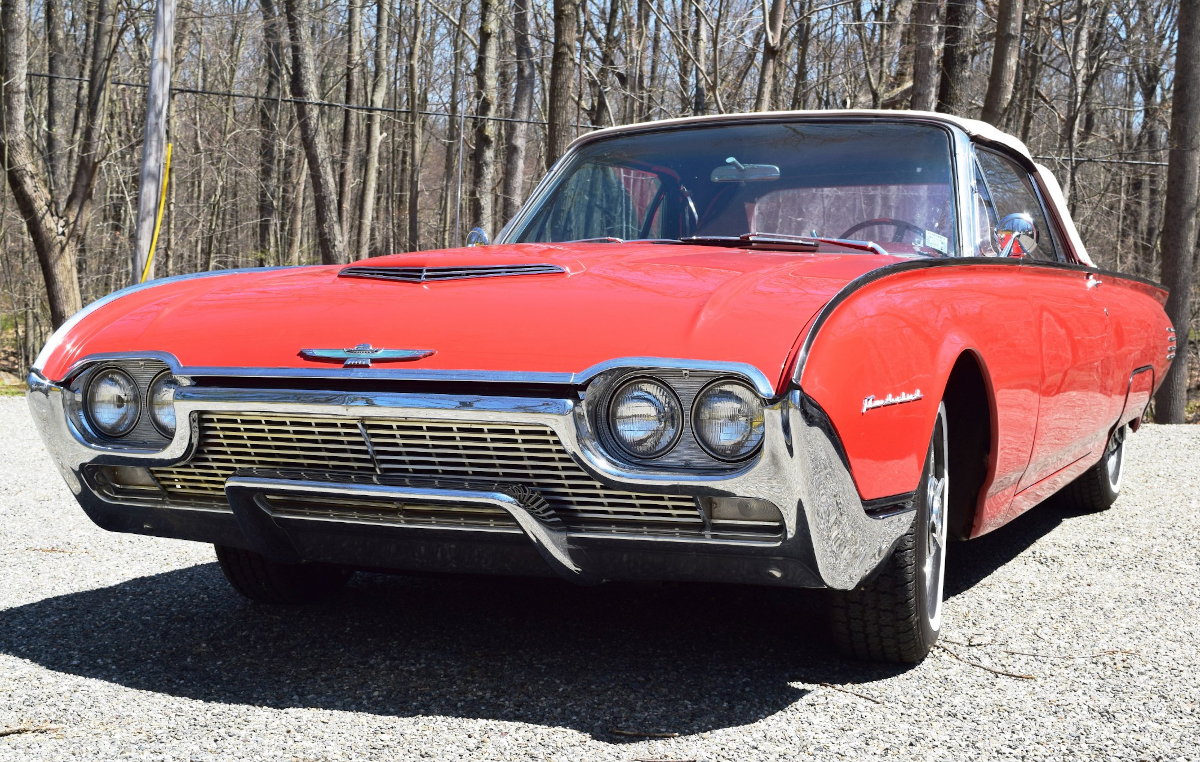 Ford’s crown jewel car of the 1950s was the Thunderbird or sometimes called T-bird. It started off for the 1955 model year as a sporty 2-seat car that competed with the Chevrolet Corvette and by the late-1950s had evolved into a sporty car with seating for four. The Thunderbird was always on the leading edge of styling. However Ford engineers took styling to the next level for the 1961 model year when the third generation of the Ford Thunderbird was released.

The 1961 Thunderbird had artistic futuristic styling that was ahead of its time. Most cars by 1961 were starting to phase out tall tail fins and move to an overall more squarish exterior design. The Thunderbird instead had a streamlined space age look with aerodynamic curved body panels. It had very subtle tail fins that were part of the stylish upper body panel crease on each side of the car that started from the front-end and ended right above the rear taillight area. The Thunderbird’s perfectly shaped round rear taillights personified the jet age.

The Thunderbird had a low stance and its aerodynamic streamlined front end with 4 round headlights gave the impression it was made for high speed racing. Ironically if Ford had used the 1961-1963 Thunderbird on the NASCAR racing circuit back in the day, it would have dominated with its superior aerodynamics when compared to most squarish cars of its day. It was such a great looking design that Ford only made very slight exterior trim changes for 1962 and 1963. The Thunderbird would not get an exterior redesign until the 1964 model year. The 1961 Thunderbird along with the 1961 Lincoln Continental were the first passenger cars to have curved side windows which added to the Thunderbird’s modern streamlined look. 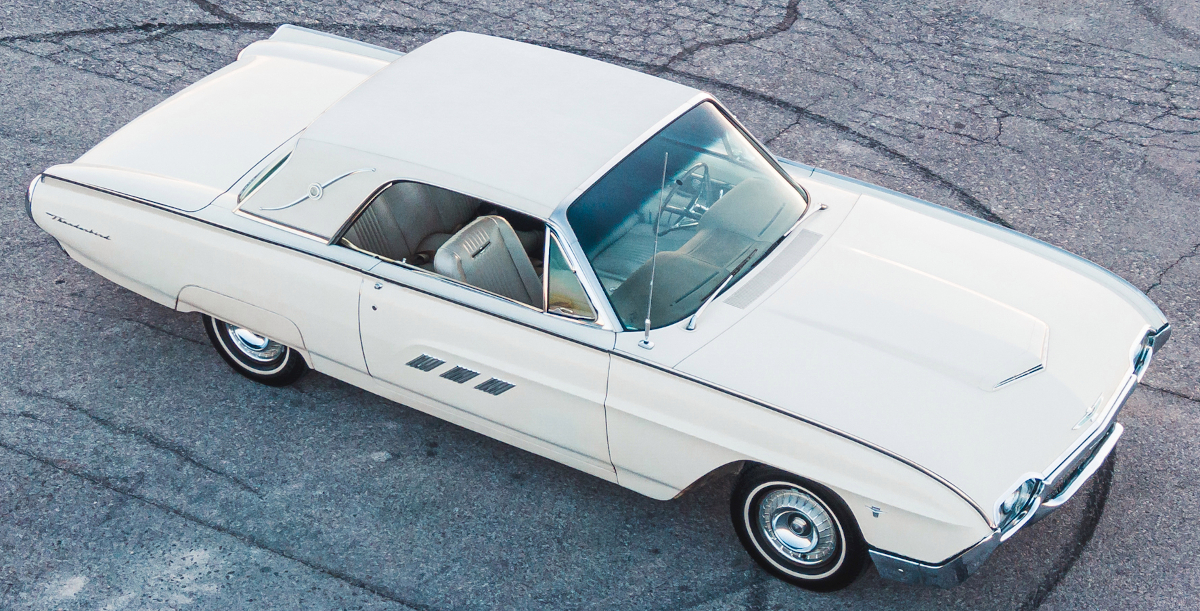 The 1961-1963 Thunderbird didn’t fit into any of the different automotive classifications at the time. It wasn’t a performance car and it wasn’t the typical conventional luxury car, it was something in between. It had plenty of engine power under the hood but it was a medium-sized car with a heavy curb weight of around 4,200 lbs which at the time was what a much larger full-size car weighed. This gave the Thunderbird a nice luxury car ride and an overall feel that it floated on air especially on the highway. It was the perfect upscale sporty car to cruise around town or drive on the highway. It was the Thunderbird’s heavy weight kept the Thunderbird from being a performance car. 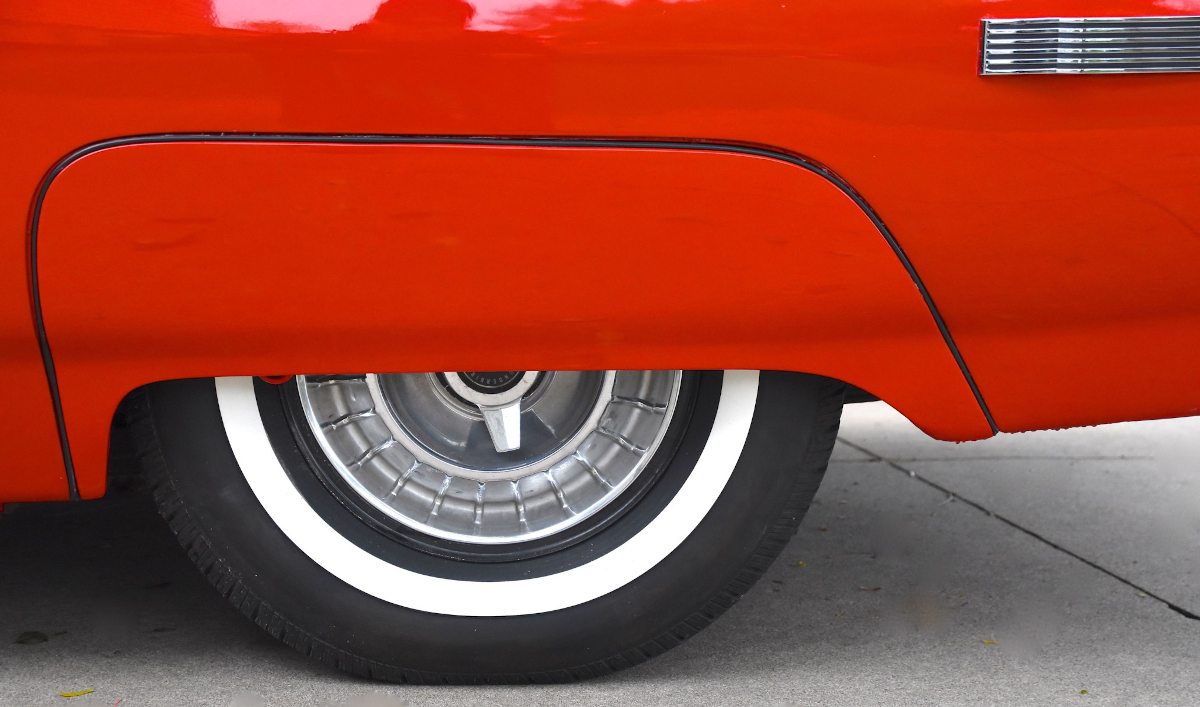 The 1961-1963 Thunderbird was out of reach for most young buyers since its base price started out at $4,170-4,445 and if loaded with options it was well over $5,000. As a comparison the 1964 1/2 Mustang only had a base price of $2,368. The 1961-1963 Thunderbird was the in car to own especially in Southern California, owning one was a way to show others you were somebody special. It was also a very popular car among celebrities, corporate executives, and even sports stars. 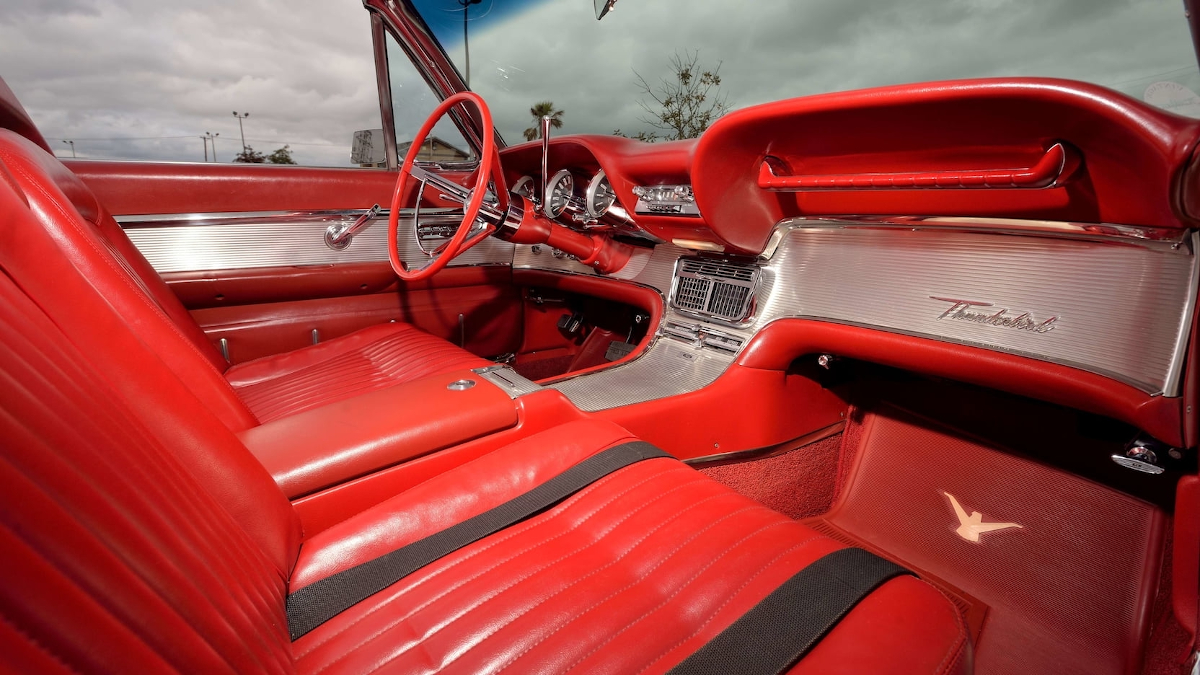 car look. The Landau coupe was standard with a very upscale looking vinyl top. It was the Thunderbird Landau that made popular the vinyl top car option.

Overall the Thunderbird had an ultra modern design theme which also included the interior. Bucket seats were standard and so was a beautiful sculpted center console which complimented the great looking dash design and layout. Leather seats were on the option list along with a lot of other luxury options. The Thunderbird had as an option in 1961 and was standard in 1962 and 1963 with a swing away steering wheel where the entire steering column swung toward the center console making it easier for the driver to enter or exit out of Thunderbird. The convertible and roadster models had a power soft top that completely retracted into the rear trunk area where the soft top could not be seen when the convertible top was down.

During an era when most cars were standard with a manual transmission, Ford made mandatory on the 1961-1963 Thunderbird the Cruise-O Matic MX 3-speed automatic transmission. The standard engine was a 300 gross horsepower 4-barrel carburetor equipped 390 cubic-inch big-block V8. For 1962 and 1963 a 340 gross horsepower triple 2-barrel carburetor high-performance version of the 390 V8 was optional. This high-performance engine was known as the M-code 390 which propelled the heavy 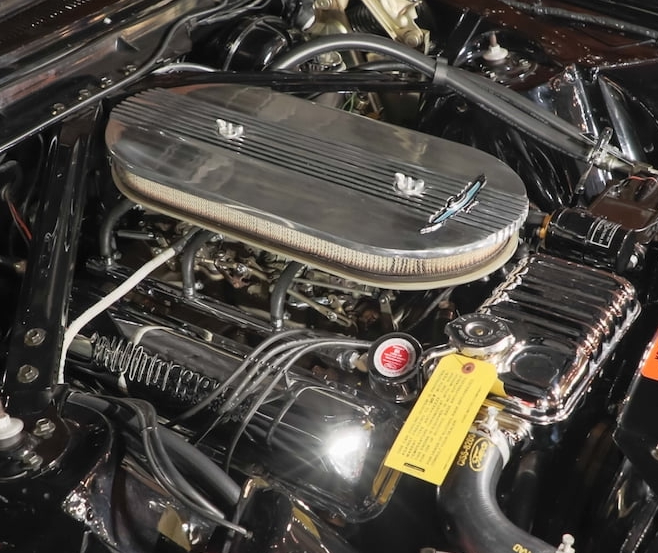 1962-1963 Thunderbird from 0-60 mph in the low-to-mid 8 second range and had a top speed of 125 mph. These were impressive performance figures during this era.

A total of 214,375 1961-1963 Ford Thunderbirds were produced which was a very successful production run especially when you consider the Thunderbird’s luxury car price. The 1961-1963 Thunderbird was a one of kind car of its era, it gave the buyer the perfect mix of luxury, sport, and styling. Even though it’s a car from a long departed era, it’s still as relevant today as it was when it was new. The truth of the matter is the 1961-1963 Thunderbird never seems to age and that’s a good thing.