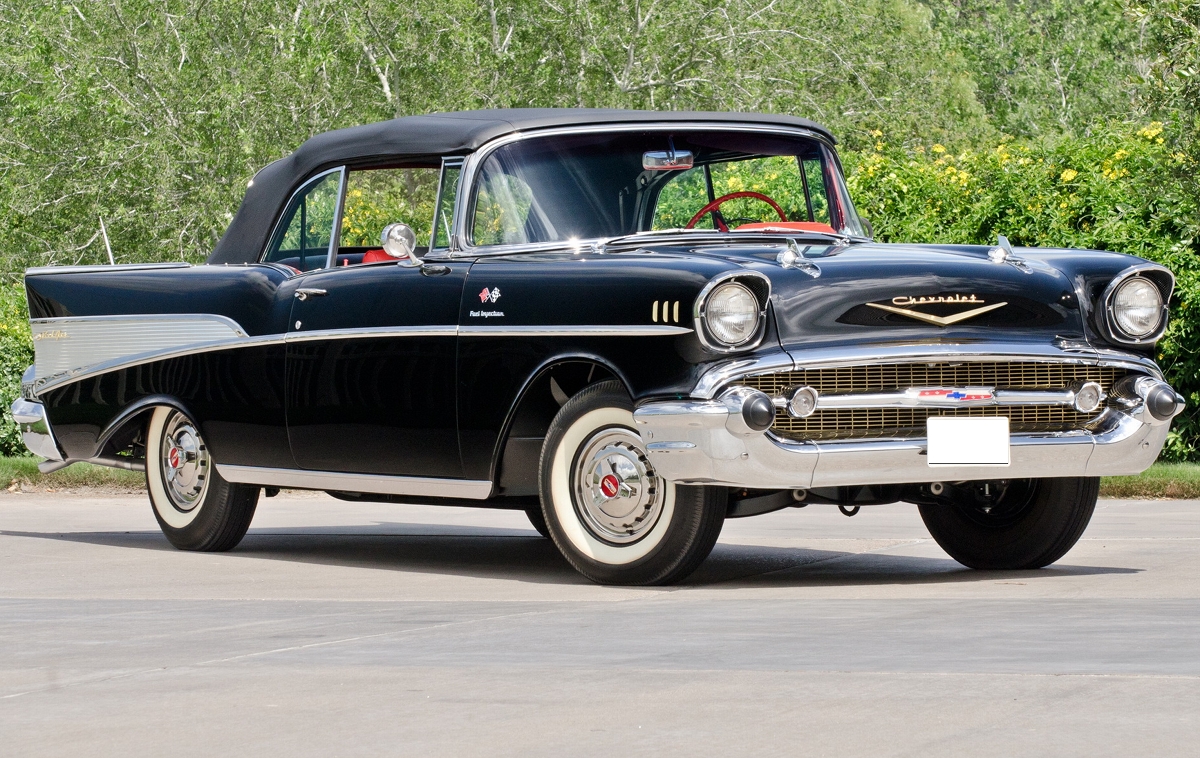 The 1957 Chevrolet or 1957 Chevy which it is more commonly called, was the first massed produced American car built after World War II to rise to the level of a collector car. By the 1970s, 2-door 1957 Chevy models in mint condition were encountering skyrocketing prices as car collectors started to regard the 1957 Chevy as one of the most beautifully styled cars built after World War II. Even today with the recent rapid rise in values of classic American muscle cars, mint conditioned 1957 Chevys have continued to rise in value, even thought they are not as high as the high dollar classic muscle cars 1957 Chevy values have never been higher.

In order to fully understand the appeal of the 1957 Chevy, we have to rewind back before World War II when during the 1930s, the United States was in clutches of the Great Depression which forced most cars during this period to be utilitarian with function being their main purpose. Styling was now far down the priuority list. After World War II a long period of prosperity began in the United States and U.S. automakers would turn towards styling to sell cars. Starting in the late-1940s, the “Jet Age” name was applied to this period of time in America with the advent of jet engine powered airplanes which at the time were military aircraft in the U.S. 10 years later U.S. passenger jet travel service would begin. It was during this jet age, that U.S. automobile designers began to integrate jet airplane influenced design themes into production cars. Rear tail fins which mimicked airplane tail fins were found on many of the late-1950s American cars. It would be a temporary trend that would by the arrival of the 1960s fade very quickly. Chevrolet’s most prominent tail fins were found on its 1957 Chevy which was available in four different models the 150, 210, Delray, and Bel Air – all were available in a 2-door or 4-door configuration. There were also different 1957 Chevy station wagon models. However it’s the 2-door 1957 Chevy Bel Air that is the most revered and this even includes the low production 2-door 1957 Chevy Bel Air Nomad wagon. The 2-door 1957 Bel Air was also available in a 2-door sedan, 2-door sport coupe, and 2-door convertible.

Chevrolet back in the 1950s was a budget automaker making cars for the average buyer. The 1957 Chevy Bel Air had as much chrome and decorative body work as a 1957 Cadillac, yet its body lines were more attractive. The Bel Air was Chevrolet’s upscale car.

Chevrolet seemed to hit the perfect balance with the 1957 Bel Air’s styling, with lavish chrome and body work and beautifully styled body panels. The crazy outlandish tail fins were the cornerstone of this body design. The design is so perfect even Chevrolet at the time of its production didn’t realize how special it was until many years later. 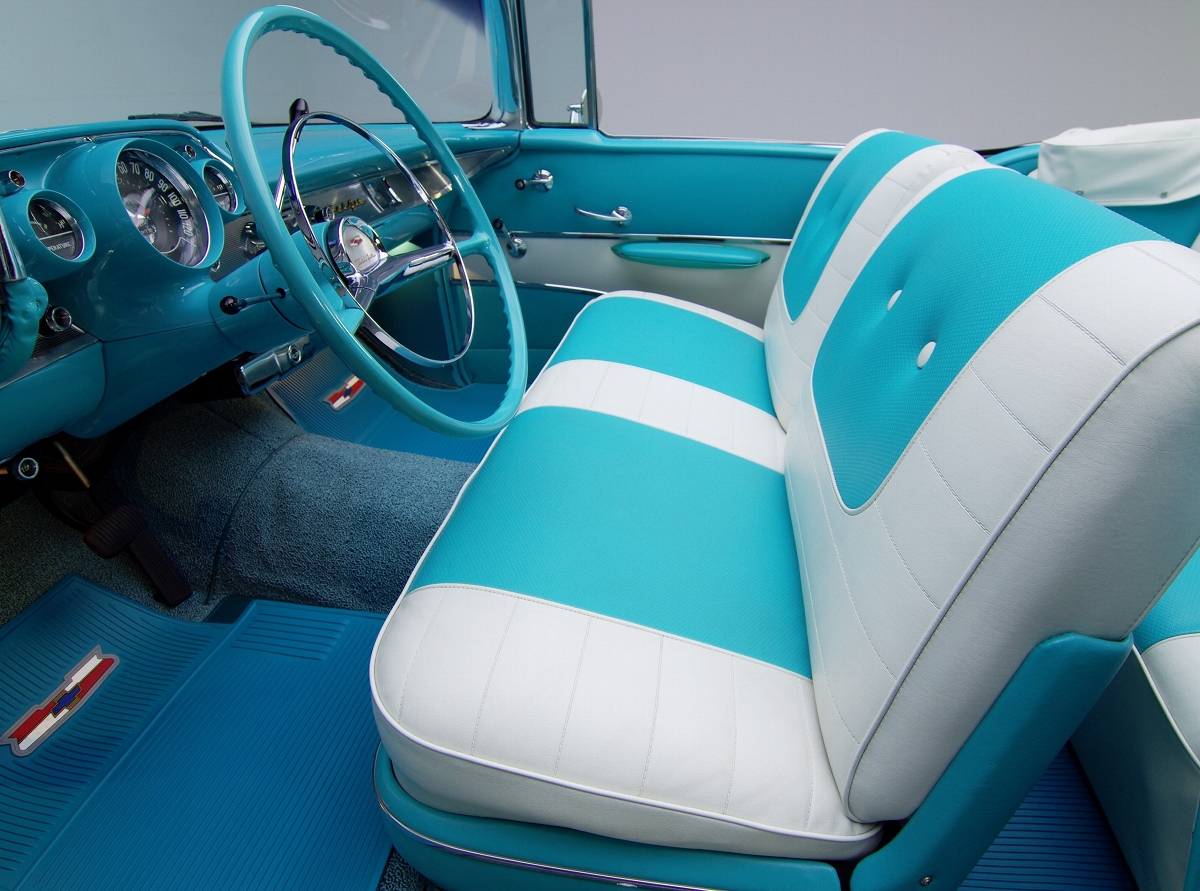 With the 1957 Bel Air, form came before function. Whether originally intended by Chevrolet, this car was the perfect work of art. Even though the 150, 210, and Delray were attractive they were more pedestrian and didn’t have all the Bel Air’s fancy exterior trim. One of the hidden design elements with the 1957 Chevy that complimented the Bel Air’s upscale exterior trim was its perfect symmetry. There were two chrome rocket hood ornaments, two headlights, two front bumperettes, two tail fins, and even two rear radio antennas which were optional. These gave the 2-door Bel Air that perfect balance of aesthetics. Even the fuel tank filler cap is located behind the driver side rear taillight area trim so it didn’t ruin the overall lines of the car. The perfect balance of aesthetics also applied to the colorful and roomy interior space and the tastefully done dash layout.

The 1957 Bel Air was standard with a 140 horsepower 235 cubic-inch Blue Flame Six cylinder engine, a 162 horsepower 265 cubic-inch V8 was optional. However the really good news was 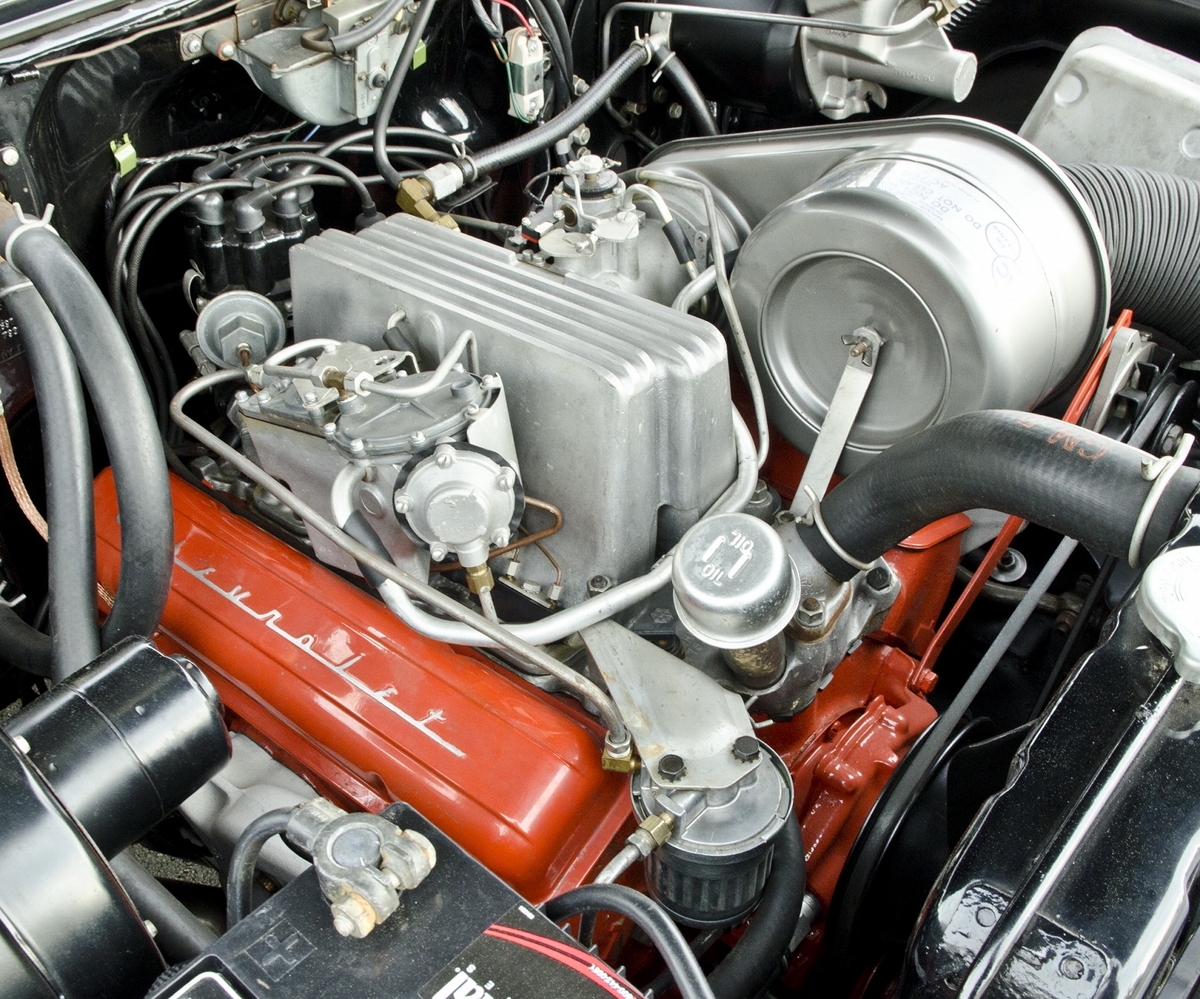 the introduction of Chevrolet’s new 283 cubic-inch V8, there were 6 different versions of this engine available in the Bel Air ranging from 185 to 283 horsepower. The best were the 270 horsepower 283 V8 with dual 4-barrel carburetors and the fuel-injected 283 horsepower 283 V8. Both of these were available in the 1957 Corvette and were very potent when available with the floor-mounted 4-speed manual transmission. According to a Chevrolet’s sales bulletin at the time the floor-mounted 4-speed was available during the second half of the 1957 model year in the Bel Air and other full-size 1957 Chevys but there have been no known full-size 1957 Chevys produced that were equipped from the factory with a 4-speed manual transmission. The 1957 Bel Air was offered with a 3-speed manual transmission or a 3-speed manual with overdrive. There was also an optional 2-speed Powerglide automatic transmission.

It’s safe to say that Chevrolet will never produce another car like the 2-door 1957 Bel Air, it’s a time capsule of a bygone era. Its a rolling Mona Lisa, that will keep increasing in value.