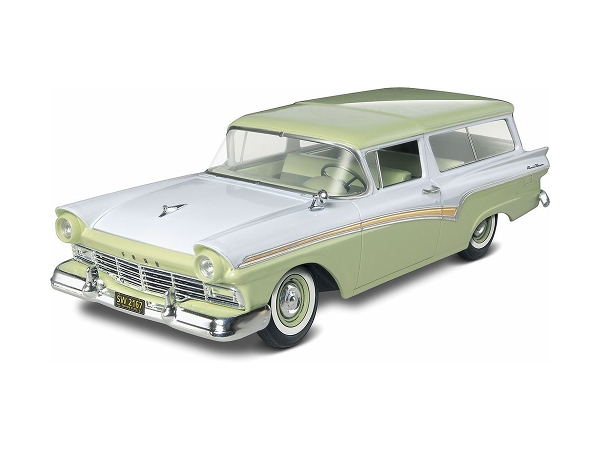 By the 1950s, station wagon’s were becoming a popular choice among American car buyers. When compared to 2-door and 4-door cars, Station wagons offered more cargo capacity and in some cases increased seating capacity due to a third seating row. Station wagons were a no brainer for U.S. automakers since they were usually based on existing 4-door sedan offerings. In other words it was just an iteration of another car that a given automaker was already producing. Station wagons became the SUVs of the 1950s through 1980s. Though 4-door wagons were the most popular wagons after WWII, by the 1950s, the 2-door wagon was nothing new, but it had seen a bump in popularity. What was new was marketing one as sport wagon. Chevrolet with its 1955-1957 Nomad and Pontiac with its 1955-1957 Safari, both were 2-door station wagons that were trailblazers in this new sport wagon market.

Ford had introduced a base no-frills 2-door wagon for 1952 called the Ranch. After the release of the Nomad and Safari, Ford wanted in on this market and 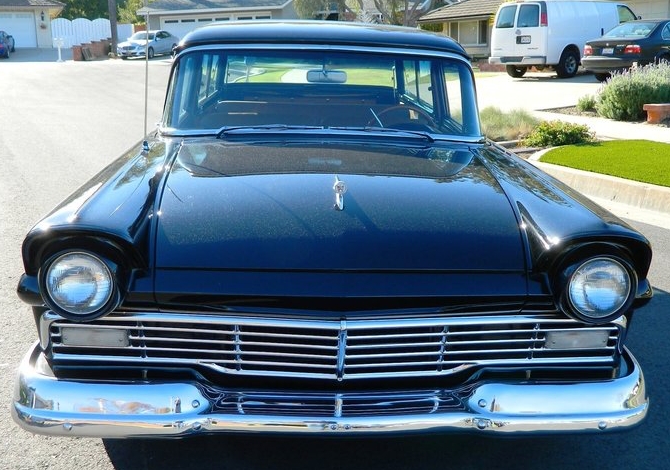 released an upscale version of the 2-door Ranch for 1956 called the Parklane (not to be confused with the later Mercury Park Lane). Ford decked out the Parklane with lots of flashy exterior chrome, standard features, and made available some upscale options. The net effect was 15,186 Parklanes were produced for 1956 which made it a success in that its production was more than the combined 1956 production of both the Nomad and Safari. For 1957 the 2-door Parklane was gone, and replaced with the 2-door 1957-1958 Del Rio Ranch wagon usually referred to as just the Del Rio. The Del Rio was not as upscale as Ford’s 1956 Parklane which was had the same exterior trim as the top-of-the-line 1956 Ford Fairlane. Worth noting Mercury released a 2-door version of its Commuter Wagon for 1957 which was also a sporty 2-door station wagon that lasted a few model years. The Commuter had a more streamlined rear window and rear tailgate door design just like the Nomad and Safari versus the boxy rear window and rear door design of the 1957-1958 Del Rio. The Del Rio’s boxy rear roofline was the same as the other Ford wagons from 1957 and 1958, same was true of the Del Rio’s innovative rear upper and lower hatch setup which allowed access to the rear cargo area. 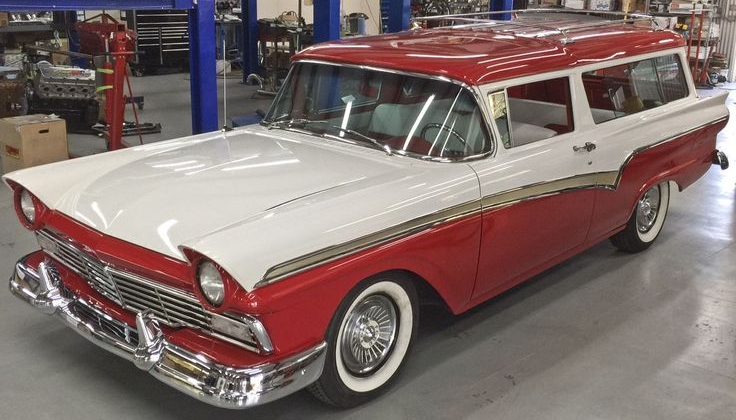 The 1957 Del Rio like all the other 1957 Ford wagons had the full-size 1957 Ford’s attractive styling which included its twin headlights and dual round taillights. The full-size 1957 Ford had styling cues borrowed from the 1957 Ford Thunderbird. The 1958 full-size Ford was essentially a carryover of the 1957 with a new front-end treatment with four headlights that looked just like the 1958 Thunderbird’s front-end design. There was a new rear taillight treatment consisting of 4 smaller oval taillights. The overall look of the 1957-1958 Del Rio was sporty especially with the loads of exterior chrome trim and its 2-doors. The 1957-1958 Del Rio used the same exterior trim scheme as the 1957-1958 Ford Custom 300 which was considered sporty at the time. The Del Rio has that quintessential late-1950s curvy styling with wild rear tail fins. It’s so wild, it’s safe to say Ford or any other automaker will never style future cars like this again. The Del Rio exterior made the 2-door Ranch Wagon look like a slacker 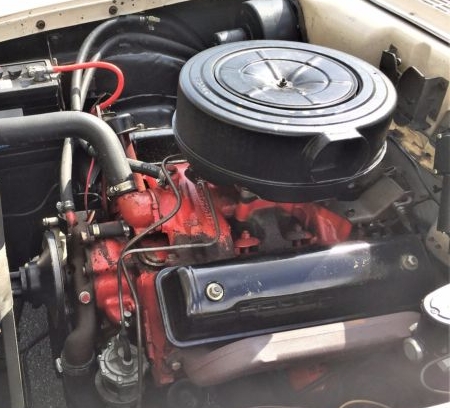 in comparison, but it was the Del Rio’s colorful and artful interior that really shined in comparison to the Ranch wagon’s mundane interior. 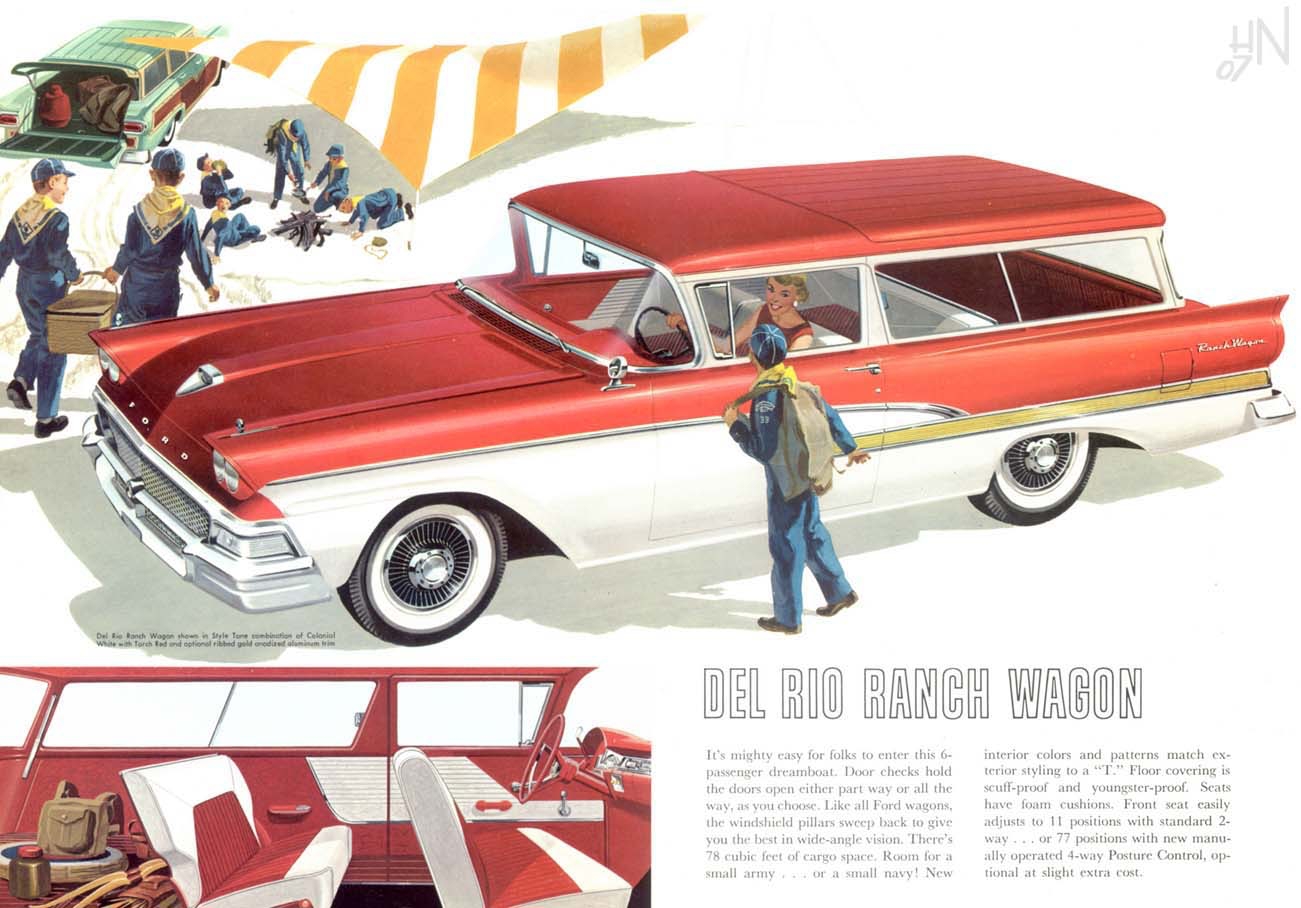 The Del Rio was an initial success with 1957 production being 46,105 units, easily eclipsing the total sales of the 1957 Chevy Nomad and 1957 Pontiac Safari combined. However 1958 Del Rio production dropped to 12,687 units. The reason for the production drop was the 2-door wagon was just not as practical as Ford’s 4-door wagon models which had easy access to the back seats due to the 2-extra doors. Most wagons during this time period were used for family hauling duties and having 2 extra doors made better sense for most buyers. Ford would only offer full-size 2-door wagons for just another few model years after the Del Rio’s cancellation. However Ford would later offer 2-door wagon models with its small and compact car offerings. 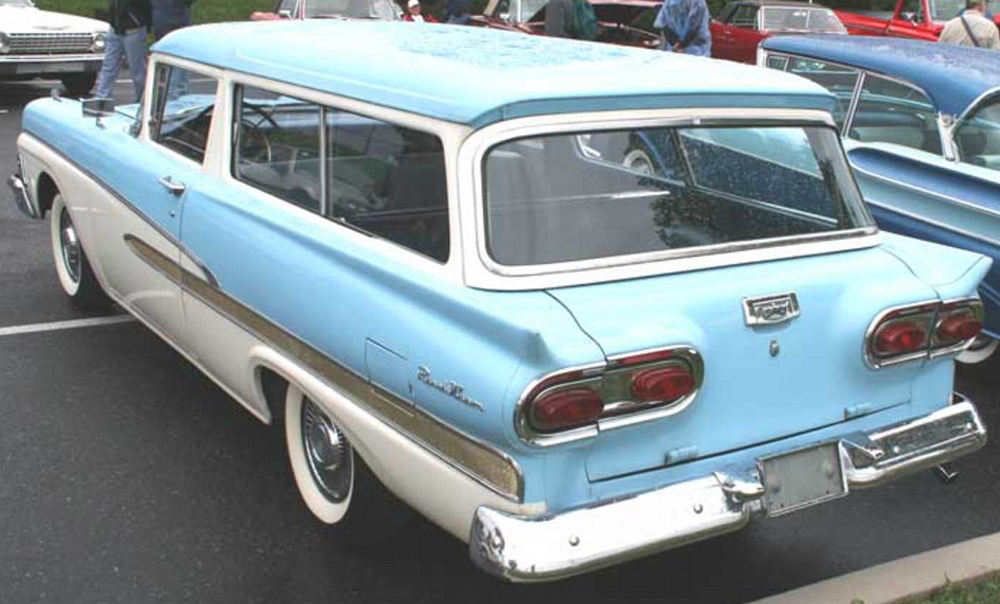 The concept of a full-size 2-door sport wagon never really took off. Sport wagons would eventually gain popularity in the 1980s but they were smaller 4-door wagons that had European touring car type flair. Never-the-less the 1957-1958 Del Rio is an interesting piece of automotive history that will never again be repeated. Even today they are great looking cars that turn heads and get a lot of attention at car shows. For the car collector who wants a great looking sporty classic car with lots of utility and cargo space, the Del Rio will certainly fit the bill.