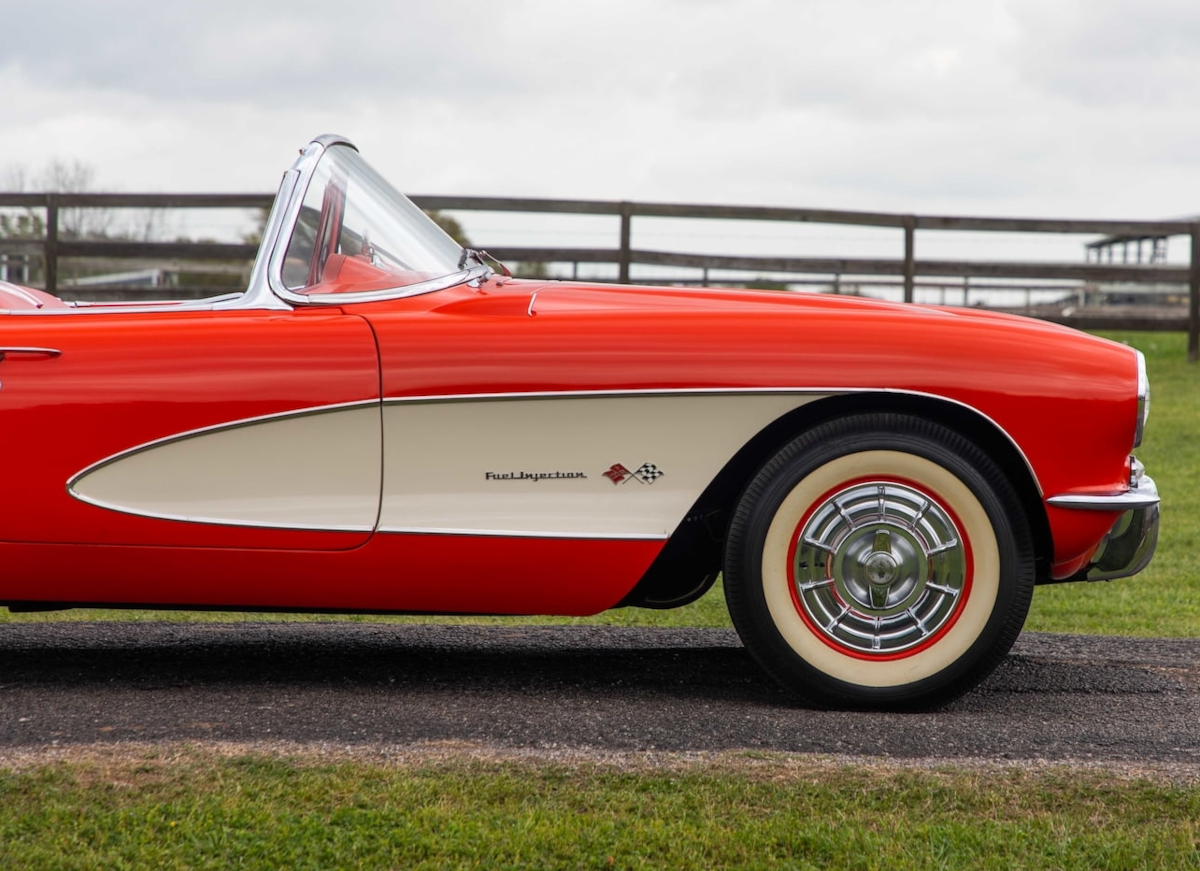 Chevrolet with the debut of its 1953 Corvette, introduced America to the 2-seat sports car. Chevrolet had big plans for the Corvette which at the time was powered by Chevrolet’s Blue Flame straight-six cylinder engine. By its third model year, 1955, sales had fallen to dismal levels. Even though Chevrolet added its new 265 cubic-inch small-block V8 to the 1955 Corvette’s option list, only 700 were produced which was a 81% drop from 1954 model year Corvette production. As a comparison the 1955 Ford Thunderbird which was Ford’s new 2-seat sports car that competed with the Corvette, had a total production of 16,155 units for 1955. Chevrolet would have cancelled the Corvette at the end of the 1955 model year had it not been for the success of the 1955 Thunderbird.

This is why it was so critcal that Corvette sales figures rebounded for 1956 and 1957, or the Corvette was going to be history. Fortunately Chevrolet greatly improved the Corvette for 1956 and 1957 in most areas including its exterior styling while also continuing to use fiberglass material for the Corvette’s body panels just like the 1953-1955 Corvette. The result of these changes was 1956 Corvette production increased to 3,467 units and to 6,339 units for 1957. The only items that carried over virtually unchanged were the 1955 Corvette’s interior, front grille, and front bumper design.

Chevrolet gave the 1956-1957 Corvette a more serious sports car look like it was ready for the race track verses the 1953-1955 Corvette which looked more like an art gallery exhibit by comparison. The 1956-1957 Corvette had lots of curves and rounded edges in its very clean and sleek exterior styling and didn’t have tail fins which was bold considering most new cars at this time had tail fins including the Thunderbird. Its best exterior styling cue was the semi oval coves located on the side doors which were surrounded by a chrome strip. These coves were only available in body color, white, or silver. Another stylish design feature was the dual exhaust system which had two exhaust outlets that where hidden in the two vertical rear chrome bumpers – there was one vertical bumper on each side of the rear. The 1956-1957 Corvette styling has aged so well, it’s a beautiful overall design that is more popular today than when it was first released.

The 1956-1957 Corvette now had an optional power convertible top, side windows that retracted into the doors, a power window option, and even an optional removable hardtop. These were all items the 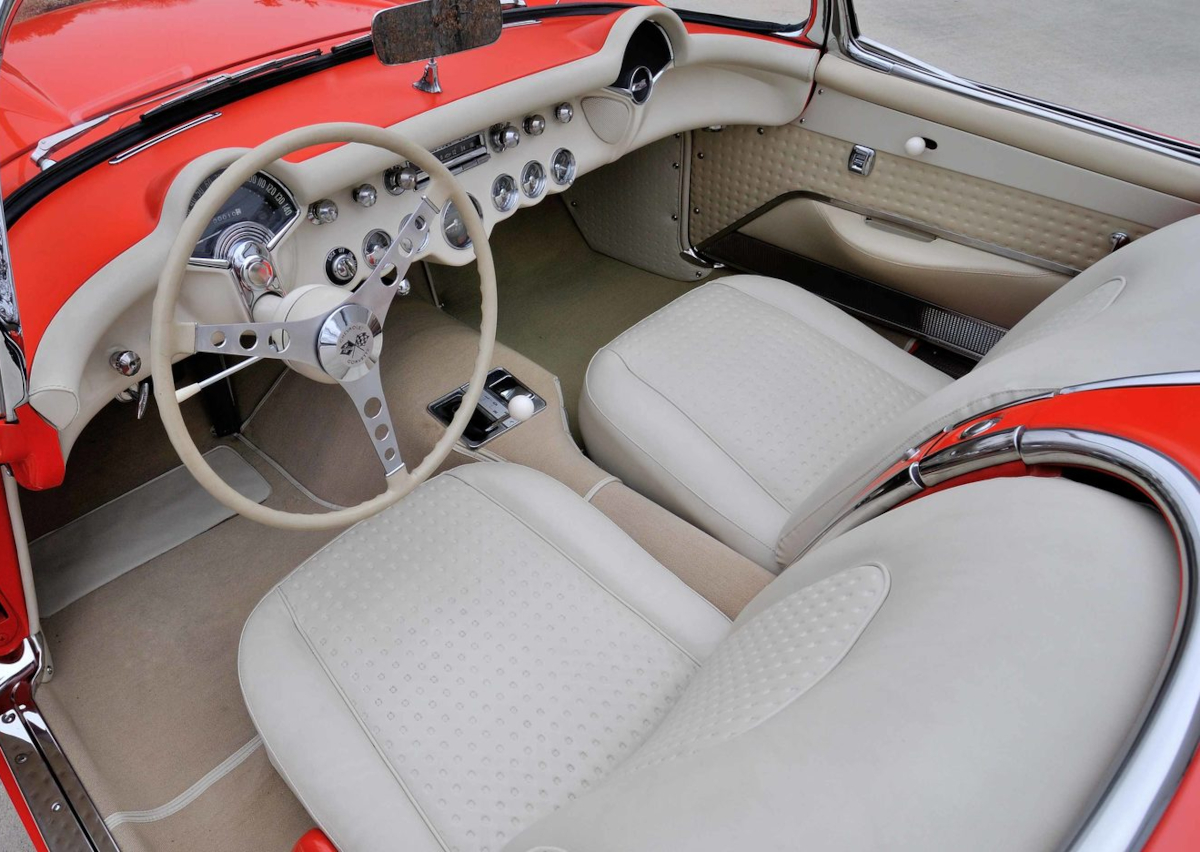 Though all these changes improved the Corvette, it was what was under the hood that made this new redesigned Corvette so special. Starting in 1956 the Blue Flame straight-six was gone and Chevrolet’s 265 cubic-inch V8 equipped with a 4-barrel carburetor was now standard however output increased to 210 gross horsepower which was an 8% increase over 1955’s 265 V8. For 1956 the optional engine was a 225 gross horsepower 265 cubic-inch V8 which was equipped with two 4-barrel carburetors. This engine made the Corvette a super fast car for its day, it propelled the Corvette 0-60 mph in 7.5 seconds and the quarter mile in 15.9 seconds. This performance was with the Corvette’s standard transmission a 3-speed manual. It should be noted that there was an optional high-lift camshaft for this engine which increased output to 240 gross horsepower, only 111 of these were produced from the factory. Also for 1956 a 2-speed Powerglide automatic transmission was 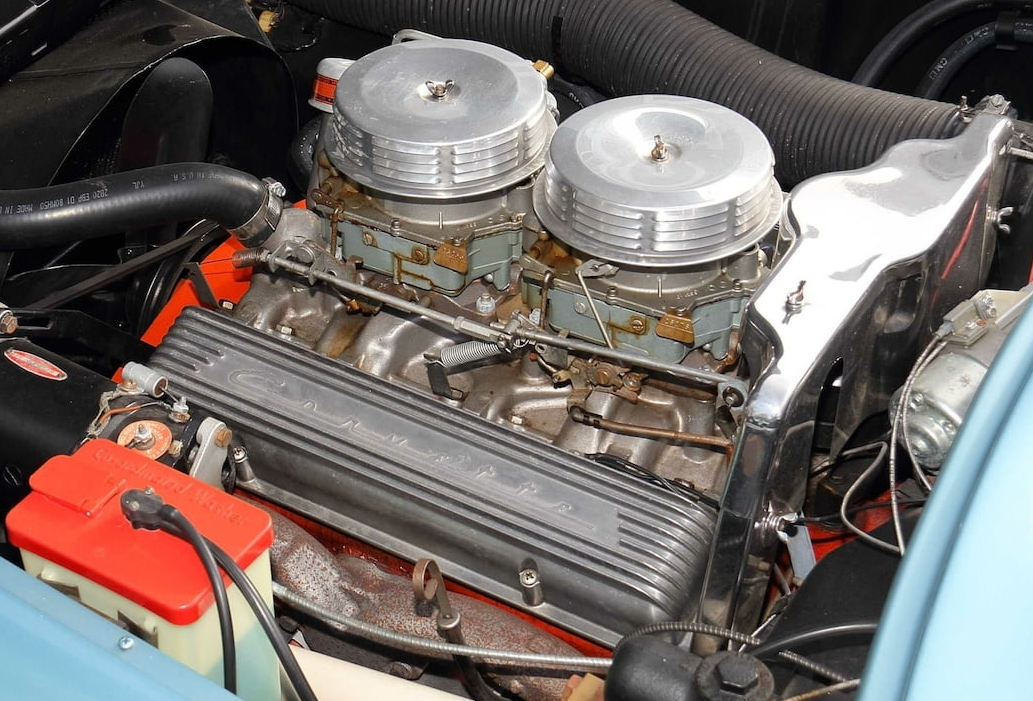 optional. The driving force behind the Corvette’s new performance persona was Zora Arkus-Duntov, Chevrolet gave Duntov who had vast experience in racing and building performance engines free reign to turn the Corvette into a very fast world class sports car.

The 1956-1957 Corvette also had the handling, braking, and steering that was the best you were going find anywhere at the time. Essentially the 1953-1955 Corvette was a sales failure and by 1955 it was living on borrowed time. Had the 1956-1957 Corvette not reversed these poor sales figures the Corvette would have been permanently cancelled before the end of the 1950s decade. Fortunately Chevrolet provided the 1956-1957 Corvette with the styling, substantial increase in power under the hood, and all the other traits that gave it a substantial boost in sales and unknowingly at the time remade the Corvette into an iconic classic sports car that is more popular today than ever.