There are differing opinions on which American car was the first muscle car. Generally the majority opinion is the 1964 Pontiac GTO gets the credit for being the first muscle car. However a good case can be made for the 1955 Chrysler C-300 being the first genuine muscle car. It was the most powerful new car back in 1955 and it was the first post-World War II American production car to reach a power output of 300 gross-horsepower which is why it had the “300” name, the letter “C” in its name stood for coupe since it was only available in a 2-door hardtop coupe. It obtained many racing victories especially on the NASCAR racing circuit where it dominated with 22 victories in 1955.

It was not just a great performance car but it was also a top tier luxury car that competed with best luxury coupes from Cadillac, Lincoln, and Buick. This is probably why the C-300 gets overlooked as the first muscle car since it was technically a high priced luxury car. Its base price was $4,110 which was a price most car buyers couldn’t afford back in 1955. Even Chevrolet’s very pricey 2-seater, the Corvette, back in 1955 was a lot cheaper than the C-300 with a base price of $2,934. Only 1,725 C-300s were produced for the 1955 model year.

The 1955 C-300 was a beautiful car which had a low stance and a very clean and uncluttered rounded exterior design. The rounded roofline along with the rest of the other exterior body panels gave the C-300 a modern design for its day especially since it had a minimal amount of chrome compared to most 1950s luxury cars. The C-300 had an egg crate style front grille and two headlights. The rear design was more blunt with understated reasonably sized tail fins surrounded by chrome. Overall the C-300’s body style was very similar to the 1954 Dodge Firearrow IV concept car. Both the Firearrow IVand the C-300 had Italian automotive design elements in their exterior styling and were designed by Virgil Exner who was the Chrysler Corporation’s chief automotive designer at the time. The reason the overall exterior design was 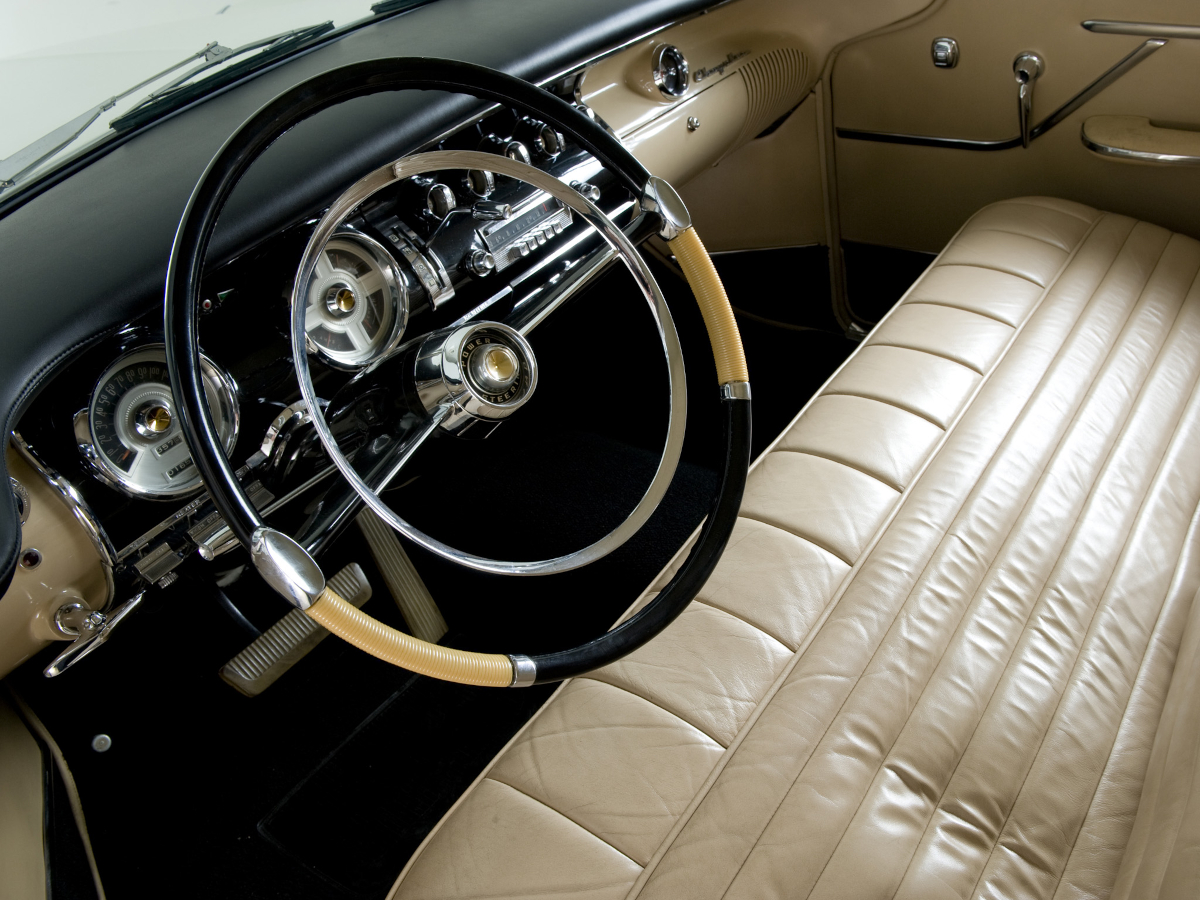 so special because the 1956 Chrysler 300B, which was the C-300’s replacement had styling changes that moved the 300 model away from its uncluttered beautiful 1955 styling to the quintessential late-1950s styling which included more exterior chrome, pronounced headlight eyebrows, and wild tail fins.

The 1955 C-300 had a good number of standard features including tan leather seats and could be equipped with optional luxury items such as a front power seat and power windows. A big luxury option of this era, air-conditioning ironically was not on the option list. The dash layout with its round gauges was very modern and ahead of its time and looked more 1960s instead of 1950s. 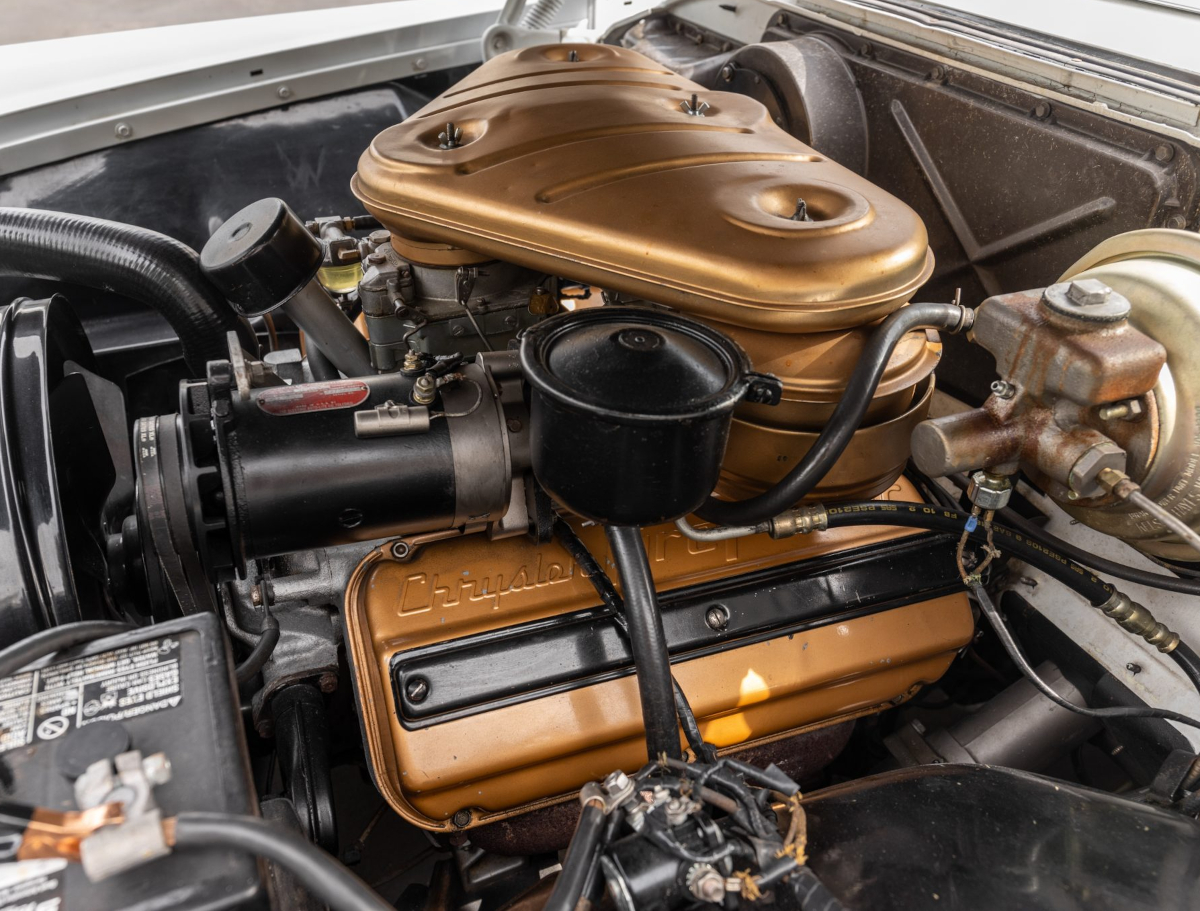 displacement for 1955. This engine like all Chrysler Hemi V8s of this era had hemispherical shaped combustion chambers which gave it a performance advantage over most V8s of this era. Add to that the fantastic performance engine parts this engine was equipped with from the factory which included dual 550 cfm Carter 4-barrel carburetors, a high performance cam, a dual exhaust system, solid valve lifters, free-flow exhaust manifolds, and a 8.4:1 compression ratio. In other words for its day it was a racing spec engine in a production car and it propelled the C-300 0-60 mph in high-9 second range and had a top speed of 130 mph. Back in 1955, these were super car like performance figures. Hampering the C-300’s performance was its heavy curb weight of just over 4,000 lbs and its mandatory 2-speed automatic transmission.

The C-300 was both a true luxury car and a true performance car – it was the perfect blend of performance and luxury. It’s a shame Chrysler didn’t stick with this formula, the Chrysler 300 would gradually over time emphasized luxury more than performance. The C-300 was the ultimate performance car of the mid-1950s however it’s sheer luxury and high price back in 1955 kept it from starting the muscle car craze since it was too expensive for most younger car buyers. The muscle car craze officially began in the mid-1960s when American automakers gave younger car buyers low cost sporty mid-size cars that had powerful large displacement V8s with the same type of high horsepower that the 1955 Chrysler C-300 had. Even though the C-300 wasn’t the first muscle car, it was a big inspiration to the engineers who designed the muscle cars of the golden era. Not to mention the 1955 C-300s Hemi V8 would be the inspiration that created a new larger and more powerful 425 gross-horsepower Chrysler 426 cubic-inch Hemi V8 which would become the ultimate benchmark for muscle car engines of the 1960s golden era.